Let's be clear, my introduction to this album came not because of some out of left field inspiration to get in on this band that I completely missed out on when they were around the first time. Instead, I owe the fact of owning this album and doing the review to one Rob McNees of KNAC.com.

Those who know me, know that I write for that website as well. But it is Rob who has been doing reviews of the various reissued Riot albums and when I read his review for Inishmore I was very intrigued. So I did what any suddenly curious music fan should do when they come across something new to them. I went to my nearest record shop (Newbury Comics, if you must know), and grabbed up a copy of this album.

I've been listening to the disc off and on for a while now and finally feel comfortable enough to write a review. The short version is: THIS ALBUM ROCKS!

I mean, wow...how was this not a big album? I know it isn't Fire Down Under or Thundersteel, the two albums that are the best known and best regarded albums from Riot. However, if you think this isn't one of the band's best releases, you are just fooling yourselves.

Guitarist Mark Reale leads the band (it was his baby, so to speak) and the poster designed CD booklet contains an essay from him from back in 1997 detailing the story the album conveys, the process by which it was created and the inspiration behind the use of Irish and Celtic myths and music. The booklet is updated with an essay from guitarist Mike Flyntz.

As for the music, it really just fires the rock and roll imagination. Now, using Irish music as inspiration is one thing but don't let that notion think that there's any less rocking power on the disc. After a highly Celtic influenced instrumental called "Black Water" opens the disc, there is barely a breath in the album's pacing.

"Angel Eyes" blows out of the speakers fast and furious and is followed by one aggressively uptempo track after another. The first five songs on this album are all outstanding with "Kings Are Falling" having a stand out guitar solo, in particular. It is musically exhilarating, beginning with the foundation laid down by drummer Bobby Jarzombek (who went on to play in Halford). The pounding rhythms fuel the guitars and then when you factor in an amazing vocal performance from Mike Dimeo, you have a nearly complete perfect package.

Yes I know that Rhett Forrester is the best known of Riot's singers, but Dimeo blew me away here.

To be honest, there's really only one track on the regular album that I didn't much cotton to. That is "Watching The Signs". It's got a hard edged sound but there's just something about it that made me want to skip ahead. I don't know why, but there it is.

Once you do get past that track, you've got yet more killer rock tracks with "Should I Run", "Cry For The Dying" and "Turning The Hands of Time". But I'll let you in on a not so secret little factoid, my favorite song on the album might just be the slowest one. And by slow I don't mean a ballad, at least not that slow drawn out lovey-dovey type of song. No, "15 Rivers Wide" moves along steadily, it's upbeat but not a full on rocker. But the song just has a really smooth sound and cool vibe to the lyrics. What really makes the track special is the way singer Dimeo works his performance, especially in the chorus. This song is just so top of the heap for me that I'd wager that once I finish checking out the band's back catalog, it will still be one of my favorite Riot songs. Oh, and there's an acoustic demo included as the last track on the album so you can see the early creation of the song. You can listen to the song HERE!

Given the origins behind the album, I would've thought there would be a bit more overt Celtic sound but while there is some, the album should be seen more in line with Irish rock band Thin Lizzy than The Irish Rovers. However, the Irish Trilogy piece at the end of this reissue was a really nice touch and nod to Ireland's musical history. "Forsaken Heart" is short on lyrics but what little vocals there are combine with the music to be almost heartbreakingly beautiful. Reale's instrumental "Inishmore" captures that traditional sound while the choice to do an instrumental version of "Danny Boy" paid off handsomely.

I knew about Riot all these years, but they just were never a band I got into. I didn't have the time, money or inclination to add another band to my must listen to list. For that, I should probably apologize to the band and their longtime fan base (the band still exists today as Riot V, carrying on after the death of Mark Reale) for my willful ignorance of their music. I also have to thank Rob McNees too. If the rest of their music is as strikingly great as what is on this Inishmore CD, I'm about to embark on an amazing musical journey into their past. You should do the same! 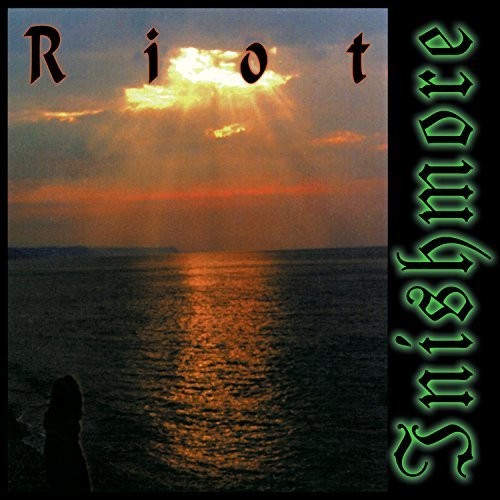