Recording  in Chicago using the group The Empty Pockets as his backing band, Simon Kirke found a wildly divergent group of songs with which to fashion his latest solo album. The material ranges from bluesy rock to moody midtempo numbers and dips a toe in some country and folk tinged songs as well. There's a brief essay in the liner notes where Kirke explains how the collaboration came to pass.

The album opens with the title track, a jaunty uptempo number that gets things off on the right foot. The song is an instant earworm and each time that I've listened to it, I immediately feel a smile coming on.

Kirke wrote or co-wrote each of the songs on the disc, the sole exception being his cover of Bad Company's "Feel Like Making Love". Yes, he was the drummer on the original track. While he wisely kept the basic framework of the song intact, Kirke wisely threw in enough of a spin on this new version to give the song a kind of new identity. This makes the song work far better than a lot of covers that I could think of lately. Much like his previous album, 2011's Filling The Void (See That Review Here), Kirke not only co-produced the album but played drums, guitar, keyboards and ukulele as well.

"Into The Light" starts out slow but grows into a bold track given an extra bit of depth with the use of a vocal choir towards the end of the song.

Kirke's love song "Maria", seems clearly written for a new woman in his life. While it is an understandable notion to write about love, given the strong emotional connection Kirke has with the track's sentiments, it was a bit surprising to me that I had a hard time making any kind of personal connection with the song. The song "Stay With Me" mines a similar vein, but I ended up enjoying the mid to uptemp number a little bit more.

The song "Melting On Madison" is a redo of the song that appeared on Filling The Void. The song still has that piano and sax noirish feel to it, as the couple in the song that are so into each other to the exclusion of the world around them appear to still be going at it. It's been a while since I have heard the original version but this time around, the song just felt kind of flat to me.

I don't know if the song "Friends In The Woods" is Kirke's initial foray into kid friendly music, but when you listen to this country and folk music influenced track's lyrics about different animals that he's "friends" with, you kind of marvel at how he spins what is essentially a fairy tale type of story. And it would entertain the heck out of an audience of children. Hell, I loved the song too.

For me, the two best tracks on All Because Of You are of such dissimilar songwriting tacks, they are the perfect showcases for each side of Kirke's music abilities.

"Trouble Road" is the hardest rocking song on the album, a slice of ballsy blues rock about the fall and eventual rise of a hard living guy. The track is highlighted by a lead guitar guest appearance by Warren Haynes that is simply fantastic. He fuses such an intensity into the leads that you can feel the heat his playing must create.

For some strange reason, despite a real world lack of desire to do anything like what is described within the song's lyrics, I felt real sense of kinship with "Warm Gulf Waters". The slickly paced song introduces the listener to a long haul truck driver with a dream of retiring to "a cabin on a stretch of beach only the dolphins know." It's a great story and sung with such a depth of passion, you feel a tug to actually do that kind of move yourself.

Maybe I'm a bit biased but I've found that I really enjoy and appreciate the work Simon Kirke is doing with his all too infrequent solo albums. While every track may not be appeal to me personally, there's such a winning mix of material that there is a little something for everyone regardless of your preferred musical genre. And that is exactly what you get with All Because Of You, an album that is all about being a rollicking musical adventure that leaves you with a pure feeling of enjoyment. 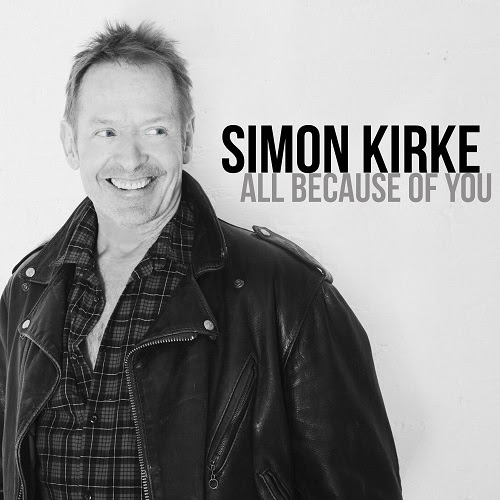 I can't say either song tended to pull me in and make me want to hear more, though they were both fairly easy to listen to.  That last one is a little catchy.