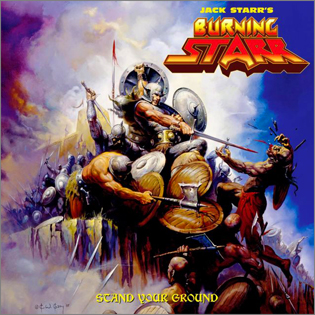 Jack Starr of Virgin Steele is back, stronger than ever. Apparently six years between projects is enough time to create a masterpiece. The band, because there is no question about it, this project is the end result of a band, further consists of Todd Michael Hall -vocals, Ned Meloni -bass, both from Reverence as well as Rhino -drums bringing his expertise from Angels Of Babylon.

In a time when Metal music mutated into many sub forms, it's refreshing to hear a band churning out the unapologetic, traditional Metal. But don't jump into conclusions. This is not a tired formula, raw recording type of thing. It's well chiseled to meet today's high standard of professional productions, bringing the glory days back to the surface.

Secrets We Hide hits the ground running. It's a perfect album opener with memorable lines designed to get your attention from the get go. Nothing strange there. Strong songs were always the bullet catchers, serving the one and only purpose. Following it's steps The Enemy will raise the bar and this is the earliest sign the band won't let your attention wander around. The third track, not only serves to give this projects it's title, but to wrap you in and seal the deal. With it's infectious riffs, the epic image from the cover (painted by the great Ken Kelly) is brought to life in one of the most exciting long tracks I heard this year. The tempo changes throughout the song are so divine, they could easily fill a whole album by themselves. Stand Your Ground, is the culmination of what the first two tracks started. It's hard to believe the band can continue with same intensity, yet seemingly without an effort, Hero accomplishes exactly that.

The band is not ready for a filler yet. (You start to wonder if there is one coming at all. ) Destiny is a different song, though. The rhythm section keeps it heavy, but the melody reminds me of those Rock songs charting the lists in the 80s, with Big Country coming first to mind. Melodies are also big part of the Sky Is Falling, with a chorus that could have been shook loose from any early Europe release. And Worlds Apart is the first time the band will let you breath, for it is a ballad with epic tendencies, invoking reflections before the horn calls out the final battle.

Escape From The Night and We Are One are extremely melodic, but they aren't mellowed down to the Melodic Rock genre. The approach is still heavy, putting them in a Melodic Heavy Metal orbit, with a choruses that are easy to sing along.

The pace increased and heavy weights were added to Stronger Than Steel, as we realize the time draws nigh to the end. In a twist of delivery, False Gods were finally revealed as the arch enemies Stand Your Ground was created to fight.

From here on the CD will close with an aptly titled song To The Ends. Did the brave warriors of Heavy Metal win? Judging from the feel good go around mood, the swaying chorus and the uplifting acoustic break, I'd say they did. Stand Your Ground as a whole is a testament of old school Metal not throwing in the towel, yet. As a proud owner of the Double LP, I can sincerely recommend this version over the CD, not only for that truly great artwork Ken Kelly put on the cover, but also for the Bonus Track When Evil Calls. I can see why the song was left out from the CD. The intro and it's undertones reminded me of the hunting melodies Merciful Fate is known for, while the galloping rhythm is something Iron Maiden would do. The split tone of the guitar solo gives the illusion of a twin-axe-attack, which is nothing to sneeze at, but as it is, it would have disrupted the flow of the album, which makes it a perfect bonus track and a good call on that.