It took me a long time to get around to being able to write this review. The first time I listened to Redemption, I only managed to get through 8 of the albums twelve tracks before I got sidetracked. I didn't end up rushing back because in all honesty, I wasn't all that impressed with most of the songs I did hear.

Fast forward a couple months later and I popped the disc in my player and took another listen. I do have to say that I found a few things more to my liking this time around. Bonamassa's soloing on the title track and the album closing "Love Is A Gamble" are outrageously good.

But I still seemed to be relatively unimpressed with far more of this album than with other albums from Bonamassa in the past.

While the opening track "Evil Mama" features yet another good solo, I had a hard time really sticking with the song as a whole. "Self-Inflicted Wounds" was a slow moving burner of a blues song that came off as kind of "blah", at least until the latter portion of the song when the pacing picked up a bit. Still, it really didn't set my music heart aflame.

Then you have songs like "Just 'Cos You Can Don't Mean You Should" which features a ton of spectacular guitar work but lyrically left me rather bored. Meanwhile, I was unmoved by "I've Got Some Mind Over What Matters" and "Stronger Now In Broken Places". Neither song really stuck with me longer than it took for the tracks to play.

Of course, this isn't to say that there aren't some pretty decent tracks on Redemption as well. I loved the conjured up vibe on "Deep In The Blues Again". "The Ghost of Macon Jones" was a jaunty little number with a lyrical story that kept you glued to the speaker for each successive line.

With tongue placed firmly in cheek, Joe Bonamassa has a playful almost slinky delivery to the lyrics on "Pick Up The Pieces", an uptempo track that manages to also create a smoky bar atmosphere to the song as well.

I really did love "Molly O'", a stomping bluesy rocker with an added intensity to the delivery of the music. But my favorite track overall had to be "King Bee Shakedown", which comes off as a rocking blues number that you could get up and dance to. It keeps the adrenaline flowing from start to finish and your foot tapping.

If Redemption had had more memorable tracks like those last two, I likely would've enjoyed the album a whole lot more than I did. Maybe I'm in need of some musical redemption myself, but while there is fully half of the album that I would love to play on repeat again and again, it's the other half of the album that ends up leaving me with a slight feeling of disappointment. 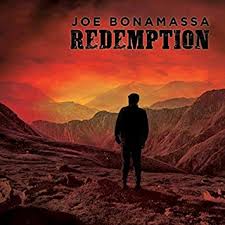 I never did buy this.  Joe really seams to write some great songs and some I'm cool with never hearing these songs again.  That kind of goes hand in hand with your review.

I had high hopes for the album but yeah, there just wasn't as many great songs as there were on his previous two solo albums.