In the interest of expediency, let's get my somewhat minor negative reactions to the new Dead Daisies album Burn It Down out of the way right at the start. The slow moving "Set Me Free" and the very amped up cover of The Beatles song "Revolution" (the album's bonus track) did absolutely nothing for me.

With that over and done with, now we can focus on the other nine tracks on the disc. Given that I was so captivated with the band's previous album Make Some Noise (and getting to see their live set opening for Kiss), I was a bit worried that I would hold Burn It Down to some impossible to meet standard in order for me to sing its praises.

Thankfully, after a distracted first listen where I just couldn't seem to focus on the music like I would want to, I spun the album again. Suddenly, there I was surrounded by this wall of sound that takes the best of modern day hard rock and fuses it with the best sensibilities of everything that made 70's "classic rock" so great. And what a fantastic journey was to be had from that point forward.

The Dead Daisies have put out 4 studio albums, plus a live record in just about 5 years time. Such a prolific amount of material hasn't seemed to hurt the overall quality of the albums as a whole though.

On Burn It Down, the disc opens up with the song "Resurrected". Filled with the requisite fiery licks from guitarists Doug Aldrich and David Lowy, the song sets the tone for what's to come in a phenomenally explosive fashion. With new drummer Deen Castronovo (replacing Brian Tichy) and longtime bassist Marco Mendoza seemingly everywhere as the foundation of the band's sound and John Corabi's full throated gravelly expressive vocal performance, the song just kills it from start to finish.

While "Rise Up" continues in the same fast charging manner, there's also a slightly more controlled methodical stomp to the track at the same time. The bluesy slow burn during the main lyrical passages of the title track give way to a rocking kick in the face for the chorus. The back and forth between the two styles helps give a pretty intense vibe to the song.

I mentioned that the band had a solid grasp of that 70's classic rock sound and given how a lot of bands back then could make a track feel as if it was epic in scope, it should be no surprise that The Dead Daisies do that too. Though of a decidedly quicker nature in terms of the song's pacing "Judgement Day" has the same kind of epic feel you'd expect to find on a, dare I say it, Led Zeppelin release.

I mentioned The Beatles cover already, but the first of the two cover songs on the album was "Bitch" from The Rolling Stones. Once again, it is a far more "rocked up" sound in this version. I'm sure it would upset purists who love the original song but I have to say that this was a killer rendition. Since I know they like to play covers in their set, I would just love to hear this one live.

The distraction I felt when I first listened to the album still wasn't enough to make me not see the greatness of three tracks later in the album. From the start, "Can't Take It With You" and "Leave Me Alone" were just bell ringing tracks that caught my ear. The former is just an overall cool rocker while I thought the chorus to the latter track was eminently catchy.

And then there is "Dead And Gone".

The thing I like about The Dead Daisies is how they can be this down and dirty gritty rock and roll band but still manage to have some wonderful lyrical expressiveness. There are great turns of phrase on the title track, "Rise Up" and "Resurrected". But for my money, "Dead And Gone", is the singular centerpiece of the album. To me, this gut busting rocker was a clarion call. Everything about this track is so far and away great. Musically, the song is highly invigorating and the strong vocal performance/presence from Corabi on this track resonates like you wouldn't believe. And lyrically...just WOW! The lyrics to the song are one of just four that made it into the booklet for the album and I'm glad it did because even something as simple as "Let the devil be my witness / To everything I've done / Cause it ain't nobody's business / And I'm not the only one" managed to have a lasting effect on me as I heard it. When lyrics stick with you long after the song is done playing, that's a real good marker in my book.

I'm sure there's lots of other flowery descriptive language I could use to further describe Burn It Down, but what it all boils down to is that this new album from The Dead Daisies is a smoking hot serving of the best of what hard rock and metal has to offer. You'd be remiss in your duties as a music fan to not check this out. 'Nuff Said. 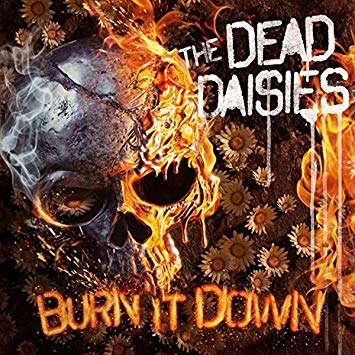 I have this.  As far as I remember I like it pretty well.  I agree with you on the Beatles cover.  I wish bands would only cover unknown tracks.

You hit on something for me.  It seems like all my listening this year has been distracted.  I really don't even know if I can come up with a top 5 list this year because of it.  I don't like it but I don't know how to fix it...

I was busy doing work at the same time as listening to the disc and since I had to focus on the work, that was the reason I was distracted.

But I got up yesterday morning and with nothing going on I just slipped the disc into the player and focused on the CD alone.