It's been a few years since I've paid REAL close attention to a new Whitesnake release. Not because I thought they'd put out a bad album or anything but I just didn't have an interest in re-recordings of Deep Purple songs (The Purple Album) or that Unzipped album the band did.

But I did love the Forevermore CD which came before those two releases. If memory serves, I had it as my favorite album the year it came out. With that in mind, I was really looking forward to checking out what Whitesnake had to offer with their first fully original album with Joel Hoekstra being part of the band AND writing songs in combination with singer David Coverdale and guitarist Reb Beach.

Things got off to a fiery start with the album opener "Good To See You Again". The energy that sizzles through the music gets you fully charged and rocking. Better yet, the lyrics perfectly encapsulate a kind of greeting to those listening to the album. It also stands to reason that it would be a great song with which to open up a concert with. I was slightly less impressed with the next track "Gonna Be Alright". I think that had to do mostly with the fact that Coverdale's vocals seemed oddly muted.

I know that I've seen other people talking in the past that his voice isn't the same as it used to be (who's would be after all this time, but I digress). I don't know if it was a production decision or what, but it does strike me funny when there's a seemingly concerted effort NOT to put his vocals more in the forefront of a song's mix.

Thankfully though, it seemed to be the only song on the extended deluxe edition of the album that suffered this issue. At least to my ears, the rest of the album sounded more like the Coverdale we are all used to hearing.

Particular evident of that is the song "Shut Up & Kiss Me". The blazingly paced rocker sees Coverdale front and center showcasing one of the better songs on the disc. It's got a great commercial vibe to it, the chorus giving the song a big lift.

For the most part, Whitesnake seems to rock the hell out on Flesh & Blood. The album's 13 standard tracks, plus the two bonus songs, only take an extended slow down on two songs and both of those are surprisingly good. "Heart of Stone" has a slightly darker sensibility to it. The song moves from slow to a midtempo style over the course of the track but it has such a killer mood to it. I liked the dramatic edginess to the vocals on this one.

The other slow song is definitely the "ballad" track on the disc. "After All" is what I can only describe as a stunningly beautiful song. It is mostly done with vocals and an acoustic guitar track played by Hoekstra. But the lyrics are that kind of purely heartfelt variety that might normally make my eyes roll. But such is not the case here. No, instead you have one of the better "love" songs you'll ever hear.

But with the softer side of things out of the way, the focus needs to shine back on the band's more rocking nature. Tracks like "Hey You (You Make Me Rock)", the title track and "Well I Never" are deliciously up-tempo numbers. I thought "Trouble Is Your Middle Name" went above and beyond and turns into another of the album highlights. I also enjoyed the rocking stomp of the 2nd of two bonus cuts, "If I Can't Have You".

On most of the band's albums, there always seems to be a song that finds the band aiming for that "epic" feel. The song that feels cinematic in scope. "Sands of Time" would serve that purpose for this release. It is appropriately fast paced and does indeed feel bigger somehow. The fact it is also a darn good tune helps as well. And then there's the blues boogie rocking feel of "Get Up". Wow! This is such a good walloping dose of rock and roll that if you were hearing this in a bar, you'd almost want to get up and dance (in a manly kind of rocking way of course).

So while it may have taken me a good long while to get around to listening to and reviewing this album, the high quality rock and roll provided by David Coverdale and his Whitesnake compatriots makes Flesh & Blood one of the better releases that came out in 2019. Now if only I could get to see them again.

(As a side note: The deluxe edition comes with a DVD that contains remixes of 3 songs plus a behind the scenes video feature.) 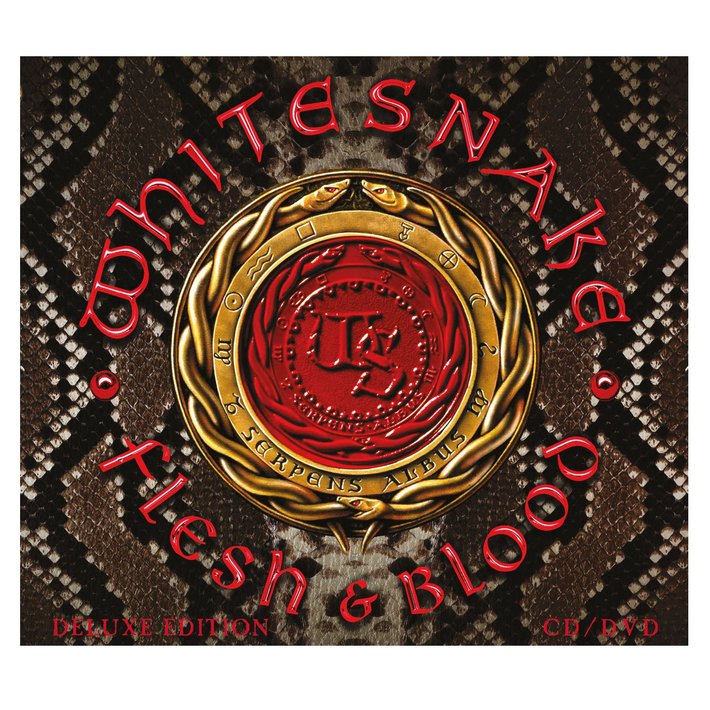