Though singer Jimi Jamison passed away in 2014, fans of his work can continue to celebrate his voice with this "new" release from Iconoclassic Records. Though originally intended for release in 1990, the Rock Hard album never saw the light of day.

BUT...while the album as a whole never got released, various songs ended up on other Jamison solo releases over the years following 1990. In fact, most of the 11 songs on the album did end up being released on Jamison solo albums When Love Comes Down and Empires. And since I own those releases in some way, shape or form, I've heard the tracks. At least the versions that were released back in the day.

But what matters most is how does this material sound? Okay, the first thing I noticed was that the volume of these tapes seemed to be a little off. I had to turn up my player's volume a bit to hear the songs at a "normal" volume level. But once I did that, it was off to the races for me.

It's no secret for those who know me that I'm a huge fan of Survivor and of Jimi Jamison's vocals. So I don't think it will come as much of a surprise when I say I loved this release. Full of great melodies, top notch song writing, great music and full on great vocal performances from Jamison, it leaves one a bit mystified why Rock Hard never got a proper release until now.

The title track opens up the disc and it is one of four songs that wound up appearing on the When Love Comes Down album. It's been a good long while since I've listened to those other albums so I found myself a bit surprised by the lyrics being more than a bit double entendre in nature. Not that it bothered me, I was just surprised is all. The song pretty much rocks throughout and I loved hearing it again for the "first" time.

The other three songs from the When Love Comes Down album are "Cry Alone", "I Believe In Love" and "True Lovers". The "Cry Alone" track is a slow to midtempo ballad song but there is a heavy dramatic sensibility to the performance that never lets it slip into sugary sappiness.

The same thing could be said about "True Lovers". The track here is an unreleased different mix but while the lyrics will remind you of a ballad, there's much more of an uptempo feel to the song with an added emphasis on a power-driven delivery.

Meanwhile, "I Believe In Love" is a fiery rock and roll number that got me all jazzed up as I listened to the song. This is a different mix than the other version of the song but either way, I just loved the vibe I got from the song.

Three of the songs here ended up on the Empires disc. But the versions on Rock Hard are all previously unreleased versions from what got released on Empires. The fast moving "First Day Of Love"  has such a great hook to it. And the chorus is pretty much guaranteed to draw the listener in from the get-go. "Cry Tough" switches up the tempo throughout the song but the big chorus is a big reason why you can get hooked on the song. As for "A Dream Too Far", man I'd forgotten just how much of a rocking track this one was.

The album's bonus track is Jamison covering the Survivor song "Ever Since The World Began" It was on the soundtrack for the Sylvester Stallone movie Lock Up. And while I don't think this is a bad cover, I do have to say that I still like the original Survivor version better.

Now, for the three songs that are classified as "NEW" on the album...since I've never heard them before I found that I was really quite taken with them. Listen, any new Jimi Jamison material is A-OK in my book but obviously I don't want the music to be crappy.

Well, the three new songs are anything but that. "Girls Like..." is a solid number with a bold vocal take from Jamison. But it is the other two songs where he really shines. Each of the two songs are absolute rockers with a killer melodic sensibility and full burn rocking soundtrack behind the vocals. "Is It True What They Say About Love" is just a stand up and shout uptempo number. As for "Something Every Heart Should Know", well I took an instant liking to the track. With an aggressively fast pace, the rock and roll bonafides are both quickly and well-established. But add in a devastatingly perfect hook and you've got a song that hearing it now makes me wish I'd spent the last three decades hearing it.

It's a little hard to give a perfectly cast review to a "lost" album that actually has most of its material on other releases. But with a great essay explaining the whole album's life and great alternate versions and mixes to some damn fine melodic rock, the Jimi Jamison Rock Hard album lives up to its title and lets his fans once again bathe in his vocal greatness. For me, I can't ask for anything more. 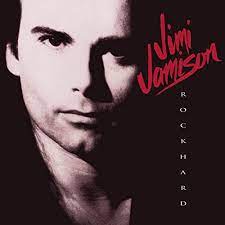