As I'm posting this review on the last day of 2022, you may wonder why I've waited so long to get around to writing up my thoughts on the new Queensryche album Digital Noise Alliance.

It is simple really, I had so many things I was trying to get around to listening to that it just took me a while to get to this album. And after listening to the album a number of times, I'm regretting the fact I didn't get around to it sooner. But better late than never, right? And since I did include it on my Best of 2022 list, I figured writing up my review now would be a good idea.

Because the band is absolutely on fire with this release!

Things get off to a rousing start with the opening cut "In Extremis". It's got a quick and lively burst right out of the gate. The song is killer throughout, with both the vocals from singer Todd La Torre and the music combining to get your blood pumping relentlessly. The fact that the song also has a nice melodic hook to draw you in only increased my enjoyment.

I will admit to sometimes being mystified by the song titles for some songs but that didn't really affect what I was hearing on tracks like "Chapters". With the album being written (in varying combinations) mainly by La Torre, guitarist Michael Wilton and bassist Eddie Jackson, there's a lively mix of heavy rock and slightly slower music mixed in. Oh, and drummer Casey Grillo has a co-writing credit on the song "Hold On".

Speaking of "Chapters", much like with "In Extremis", the music thunders out of the speakers with some great individual performances and La Torre's vocals continually soaring along as well. There's no fade out between "Chapters" and the next track "Lost In Sorrow" but that's okay because the song is phenomenal and keeps the listener on their toes. The tempo is just a bit slower, but still has a great sense of sonic fire to it as well.

After the first three songs, you might expect the band to slow things down dramatically. Maybe not for a ballad, but maybe for more of a groove driven song instead. Well, abandon that dream because Queensryche actually ups the ante in terms of aggressiveness. "Sicdeth" is a monster track that goes for the throat and never lets up.

As much as I liked these first four songs, you could've knocked me over with a feather when I first heard the next couple of tracks. While I did tend to really dig down on most of the songs through each repeated playing of the album, both "Behind The Walls" and "Nocturnal Light" were first listen greatness for me. "Behind The Walls" wasn't just an uptempo heavy rock/metal ear grabber, but I really enjoyed the way Todd La Torre's vocals were structured to hit you right in the face at times. This is a bruisingly effective song and I loved it a lot from the first listen.

As for "Nocturnal Light", the song's heaviness is merged with a great rhythmic feel giving somewhat of an even heavier stomping feel to the music. And the chorus is just darn powerful in both lyrical content and performance.

"Out of the Black" starts off just a tiny bit slower, pacing-wise, but man does it grow into yet another fantastic heavy rocker over the song's running time. But Queensryche does really slow down for real on the song "Forest". This one actually did take me a bit to fully appreciate. There's a softer focus to the performance, and at times, there was a meditative feel to the music. But after an all out rocking blitz to this point, the song works to bring you down to a more relaxed pace for a bit and then serves as a table setter for the last few songs on Digital Noise Alliance.

"Realms" gets the album kicked back up to more of the rocking music you become accustomed to on the disc.

Kudos have to go out again to the band for crafting and performing the music here. Guitarists Michael Wilton and Mike Stone bring the scorching riffs and Eddie Jackson and Casey Grillo bring the thunder on bass and drums, respectively. If I haven't convinced you of this yet, then check out the intro on "Hold On". It's freaking great! The song does slow down the pace for the main lyrical passages but when they get to the chorus, man do they once again get around to just some blazing music and more of an in-your-face delivery.

While the song title "Tormentum" might sound like it belongs on Todd La Torre's Rejoice In The Suffering album, the song is just a flat out killer track. Between La Torre's gripping vocal turn and the pounding rhythms of the accompanying musical soundtrack, the band goes for broke on the final regular track on the disc. It's just more confirmation of how good this album is on the whole.

But wait, there's more. Because the "final" track on Digital Noise Alliance is the bonus track cover of the Billy Idol song "Rebel Yell". When I first saw it on the album's track listing, I thought it kind of a weird song choice by the band. But you know what? IT TOTALLY WORKS! I mean, I don't think it's going to replace the original Idol version or anything but Queensryche does a magnificent job of giving the song their own little spin and any minor reservations I might've had about the song quickly evaporated. I pretty much just found myself rocking out to the song, much like I did with the rest of the album.

So after the album ended (each time I played it), I was left wondering how to sum up what I think of the album. But I am pretty sure that I was overthinking things here. Because the easiest way to give you an idea about how good this album is boils down to this final sentence: The new Queensryche album Digital Noise Alliance is the best album the band has recorded with Todd La Torre and one of the best releases of their entire career! 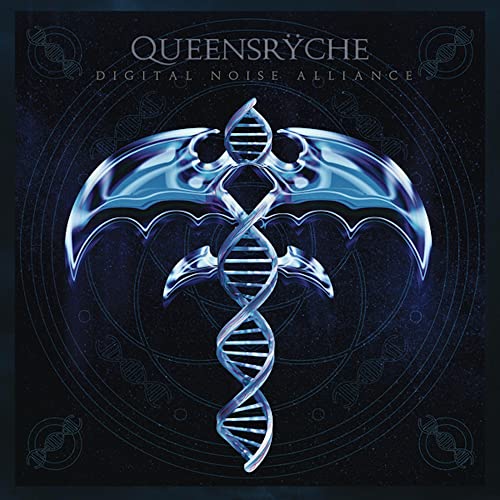