71 Keys Late To The YOO-HOO Party

Let's talk about the New Wave movement and all the One-Hit-Wonders.
Just kiddin'. We'd be here for days. However, we can touch base, with few of those obscure bands you never heard of, but... You should've.

New Wave was the most original music form, yet at the same time most derivative of anything and everything, they came in contact with before. While acts rapidly pushed each other off the charts, the world was consumed by its multitude. I'll present to you two bands today. One was from Yugoslavia, the other was from Hungary and I bet if you think of any other New Wave artist, you'd be hard pressed to find similarities between the three. Yeah. That's how manifold New Wave was.

GRUPA I - On Their Own Waves (Na Svom Talasu) 1980 - LP-(Cassette)
First, I'll present to you "I".
I kid you not.
Needless to say, thanks to the genius idea to name the band with a single letter, their career went down the drain. Later, they added "Group" to it, but the damage was too extensive to recover. The music on this album (titled to suggest, they weren't to be pigeonholed into even the broad definition of New Wave), was uniquely amalgamating many different styles into a single mixed bowl of music delicacy. The first song I heard was, Mirela, which reminded me of the raw energy Tygers Of Pan Pang's put forth in "Wild Catz". Based on that fact, I fully expected "I" to be a Heavy Metal band. They weren't, but I liked it, nonetheless. The rip from my vinyl failed, so I reached out to my friend, who owns a cassette tape and thanks to his kindness, you get to hear this forgotten masterpiece. You're welcome. No. The album was never released on CD, and my money sayz, sadly, it never will. Their next project was much more unison in sound, which wasn't a good thing. They released one Maxi-single in 1982 and said goodbye to us and each other. The only member that continued working as a musician was the drummer who joined KATARINA II, for a while.

Z'ZI LABOR - Left Forsaken (Faképnél Történő Hagyás) 1986 - LP
The second band I present to you, had a much better run at fame. It's the Hungarian New Wave band that does not sound anything like ZZ Top, but they did grab my attention with a cover of a well known song. They paid tribute to a Rolling Stones classic, with a twist. The twist was an all female (old girls, full figures, unique voices) traditional music nurturing ensemble, who performed without any instrumental backup. The "Veresegyházi Asszonykórus" was important part of their success, but they weren't the bands only assets. Z'Zi Labor won the first place in 1986 at the Interpop-Festival, composed soundtracks, wrote few plays for children and opened for Queen in Budapest. New Wave waned and Z'Zi Labor disbanded in 1994. Janicsák István, the leader of the band, tried to re-establish his musical influences, with little help from the old gals mentioned before, however they did not reach the heights, they once enjoyed.  A Best Of CD, containing many of the tracks from the album, (but not all of them) exist, however I'm still harboring hope, someday it will be reissued. Until then, You and I will have to settle for my copy of the vinyl, which looks and sounds like it survived a nuclear attack. Your're welcome. 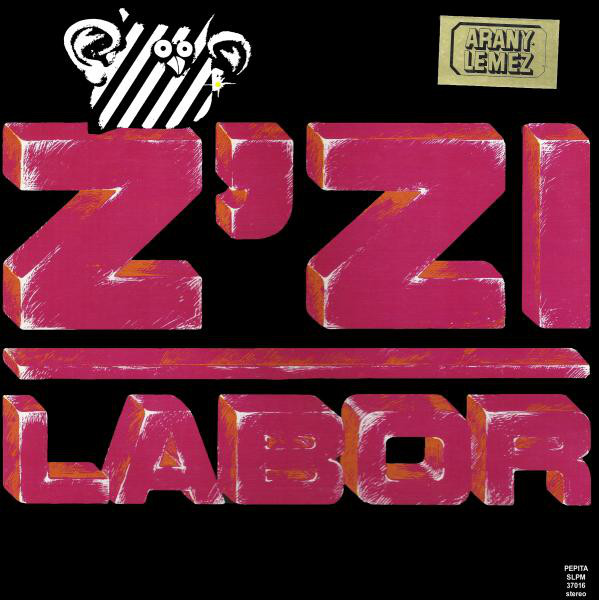 So I listened to this last week and didn't respond.

I could listen to it all over again, but won't.

Sure. New Wave. That's what it sounded like. That's what I remember, but it kind of sounded like forced New Wave, kind of like one of those albums of songs by a specific artist, but performed by The Starlight Singers. But you didn't realize that it wasn't from the original artist but it was so cheap you didn't bother to really read the album cover. I guess that's kind of rude since these were the original artists. It was just weird.