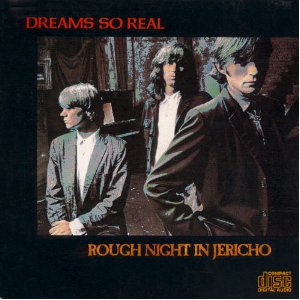 Song Of The Week: Rough Night In Jericho

So this week, and maybe next week too, I'm giving you a break from Tom Petty.  I wanted to bring you something I'm pretty sure you've never heard before, therefore you get Dreams So Real this week.  Their second album (their first as a signed band) comes from 1988.  It's entitled Rough Night In Jericho.  Dreams So Real was an Athens, Georgia trio along the lines of R.E.M., although nowhere near as popular.  The album didn't sell, but they did manage to record and release a follow-up, but were soon dropped by their label.  According to Wikipedia, at that point the band members just faded from the music business.

And that's really a shame, because although I don't expect any one of the 3 or so folks that listen to this to like it like I do, it was a huge part of my college soundtrack.  Personally, I love the songs here.  The vocalist, while maybe no Michael Stipe, is still quite good.  And although you won't hear any shredding on this album, the guitarist still does a really good job.  Even though this is alternative music, the guitar is still very important to the sound.

I put this band on my personal Top 5 Vastly Underrated Bands list, but they probably don't belong there.  They just didn't produce enough music during their years together.  And as a matter of fact, as much as I like this album, I'm not crazy about the follow-up.  Anyway, take a listen and tell me what you think.  You've got nothing to lose.

Just got up off of the floor...I was laughing my arse off!

The title track was played quite a bit on radio from what I remember.

"Molybdenum"? What the hell? Is that like total sales of 70?

Yep.  And I had to look it up to spell it right.

This era is hit and miss for me.  Right off the bat I get a Gin Blossoms type of vibe more than the REM vibe you mentioned.  I got into them for a minute or two and them I never picked them back up, not sure why... anyway,

I do get the attraction of a local band releasing material.  My hometown had one that did quite well for a bit as well, and I own their material and enjoy it very much.  Of the 2 or 3 tunes Ive posted from them on here, they didn't go over very well.  I suspect this will get a similar response, only because as I listen the songs are starting to melt into each other, they all have a very familiar tone and same rhythm geetar sound.

Cool post though, I love hearing the local flavors...

It's really a time period thing.  If I had never heard this then and heard it now, I'd probably feel the same way.  But this takes me back to a great time in my life, therefore it's very special to me.

I actually enjoyed this, thank goodness I didn't get an R.E.M. vibe at all. As a matter of fact, they remind me of The Rhythm Corps (wonder who came first? guess I could look but what's the point?). Seemed to be a little bit o darkness with them lyrics, which I don't mind. Dug the song about Cali sliding into the ocean, found that funny, in a sick twisted way. The only problem was that it seemed the album went on and on and on, is this more than 40-45 minutes (guess I could looke, but what's the point again?)?

This was a nice rest from TP, was kinda getting burned out on him....

I think you will be extremely pleased with my next AOTW.