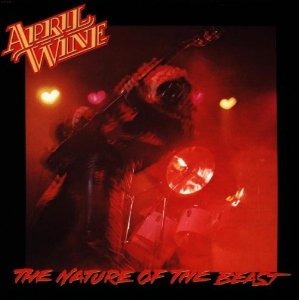 Album: The Nature Of The Beast

Singles: Just Between You And Me/Sign Of The Gypsy Queen

Song Of The Week: Tellin' Me Lies

First off, Jon says he's burned out on Tom Petty, and rightfully so.  My original plan was to finish the series on him up this year.  That may still happen, but if not, I'll finish it up next year.  It's no big deal.  The albums are always gonna be there.

This week, straight from Canada, The Nature Of The Beast is April Wine's 9th studio offering.  Wikipedia says it has sold over a million U.S. copies, but it lists it with a Gold RIAA certification.  Go figure.  Anyway, it reached number 24 on the U.S. Billboard chart and the single Just Between You And Me reached number 21 on the U.S. singles chart.  The ultra-cool song Sing Of The Gypsy Queen is a cover.  It made a small dent in the singles chart, reaching as high as #57.  Wikipedia also says All Over Town received airplay on AOR stations, but I can't say I remember it.  It's a great song as well and it sure seems like it's been featured here before.

My opinion on this album is:  The first four songs are very good.  Then the album turns very bland.  The only other song that I like is Crash And Burn.  Although I will say that the song Big City Girls sounds like an early version of Big City Nights by the Scorpions.  But not as good as the latter track.

4. Just Between You And Me

6. Caught In The Crossfire

Love this band and this album!  Seen them as a headliner on a triple bill, with Doc Holladay opening, then Loverboy who was touring in support of their debut album at the time.  Ive always been impressed with bands whose lead singer is also the lead guitarist and Myles Goodwin is dang good at it.  Maybe only rivaled by Dave Meneketti...

At the time though, they were touring as a triple guitar threat as well so the way they worked that was incredible.  You hear it in their music a lot!  Triple rhythm, go back and listen to I Like To Rock for a sample, or listen to Tellin' Me Lies on this one...

All said and done this is one of those albums Ive owned on vinyl, cassette, CD and now Remastered CD.  Should formats shift again, its likely I will own it on that as well...

No need for me to listen , I know this track for track, word for word!  Two thumbs sky high!

PS:  I bought the remastered edition from BGO Records which came bundled with this albums follow-up titled Power Play.  As I recall someone on this site didn't care for that album.  Maybe they could use a fresh listen.

Maybe they shouldn't. I also got that same version a few months back. Still think the followup sucks. But this album? No way. Classic stuff, Crash And Burn is friggin' awesome in it's heaviness.

I might put some April Wine vinyl on Ebay. Not sure. But this album and Harder faster are both great! Lots of good Wine songs on other albums too!!!!

This is an excellent album!!! I remember being one of the very few people in my circle to own this album, much less like it. I never got to see them live, but definitely a fan. The album holds up well, it's always a good listen.