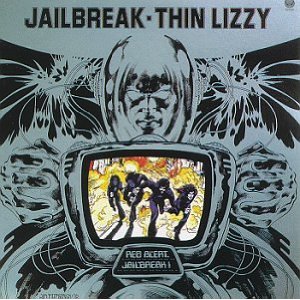 Singles: The Boys Are Back In Town/Jailbreak/Cowboy Song

Song Of The Week: Cowboy Song

How 'bout a classic this week?  It's Thin Lizzy's Jailbreak from 1976.  The album reached number 18 in the U.S. and managed a weak Gold certification from the RIAA.  I only say weak because every classic rock fan should own this album.  I'm sure it has probably sold enough to get a higher certification, but they just haven't had it re-certified.  The only single to chart in the U.S. was The Boys Are Back In Town (#12).

I'm relatively new to the Thin Lizzy party.  I've only owned this myself for less than a year now.  But my gosh, it's incredible.  Guitar all over the place.  And beautiful production on the guitars specifically.  Every solo sounds perfect within the song.  And Lynott, while not possessing the most beautiful of voices, sounds great.  His vocal inflections are perfect.  And it's practically impossible to pick a song of the week.  Every song is terrific.  I started to go with Romeo And The Lonely Girl, but finally chose Cowboy Song (by the way, I have a very good cover of this song that I'm gonna use next time we do a covers week).

Seriously, if you are listening to this for the first time, you absolutely have to buy it.  That's an order.

2. Angel From The Coast

4. Romeo And The Lonely Girl

6. The Boys Are Back In Town

And if you don't have it, make sure you pick up the Deluxe edition!

I bought this album back in '78-'79. I bought it because of the title-track, that I had heard on the radio, and that song is still okay, but Emerald will always be my absolute favorite TL-track. I love that guitar-duel.

For a very brief moment, I was kind of a TL-fan, or a Lynnott-fan. In '79 I bought Black Rose and Lynnott's solo-album, but it wasn't really heavy enough for me, and when I discovered Iron Maiden and Judas Priest a few months later, my interest in Lizzy sort of faded out. But I will always regret, that I didn't bought "Live An Dangerous" in '79, but it was too expensive for me at the time, and I never got to buy it. I've been close many times since, but nah, I should had bought it then.

"Jailbreak" is my favorite Lizzy-album, and the line-up is the ultimate Thin Lizzy.

Thin Lizzy without Lynnott is like The Beatles without Lennon & McCartney.

Thin Lizzy Deluxe Editions are great examples of how to remaster, remix and give the fan really nice extras.  I have Jailbreak, Vagabonds of the Western World, and Johnny The Fox as Deluxe editions!  Awesome!

I have this, Black Rose and Chinatown! We put them all together, we have 5!

I just picked up the NOT SO DELUXE edition, but have not listened to it yet.