Album of The Week - 16.5 (Roger Daltrey - Special Request for RJHog) 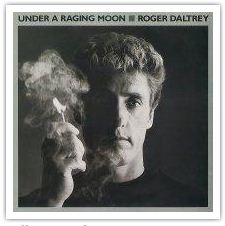 Under A Raging Moon is special album that all Who fans should own.  It is an ode to the aging Rock Star and how he doesn't want to let it go.

This song still reaches deep into my being and yanks at my heart strings.

There are all sorts of guest appearance here as well.  Cozy Powell, Roger Taylor, and Stewart Copeland all contribute.  Bryan Adams pens some really good stuff on here as well.  Although I must say that 'Let Me Down Easy' sounds almost exactly like the Adams hit "Somebody".  Not such a bad thing, but it's too close.  There in-lies my only beef with this album.

Pay special attention to the title track, it is an ode to Keith Moon.  Knowing that helps you hear this track in a better more personal way. I won't delineate each track here since they are all special in some way.  I will say you will definitely hear the 80's influence in the style but not annoyingly so.  Daltrey is in rare form and his voice sounds like it is at its peak.  I own the track "After The Fire" remastered, but the rest of the album is not. So you may hear some difference.  I wish they would remaster this one though, then I would have to buy it for a third time  :-)

Classy release for a classy guy!!!

FIREFOX users use this link...

Permalink Reply by RJhog (Admin) on October 11, 2010 at 4:10pm
Man, I really requested an awesome album. Folks, if you haven't heard this album, you have to listen to Scott's post. It is fantastic from start to finish. After The Fire really is an incredible song. You can't tell me that the beginning of the title track doesn't immediately make you think of "Won't Get Fooled Again". But I would guess that makes sense because it is an ode to Keith Moon. I bought this on cassette way back around the time it was released, and that was lost some time ago. But it has been on my mind for some time now, and with this post, I'll make sure to grab it from Amazon.

Thanks Scott for getting this posted so quickly.

Permalink Reply by Scott on October 11, 2010 at 4:50pm
What else are bank holidays for? hahahaha

Listened to this today.  I could have sworn that Bryan Adams did that song.  I looked his discography up and down on wikipedia but couldn't find it.  Then I re-read this post.

I also did not realize that Pete Townshend wrote After The Fire.

The song Breaking Down Paradise is killer.  And it's written by none other than Russ Ballard.  Therein lies a terrific radio show or playlist...Russ Ballard penned tunes that somebody else recorded...

You Can Do Magic (America)

Since You Been Gone (Rainbow)

God Gave Rock And Roll To You II (Kiss)

P.S. The title track is also terrific, with some great drumming.  Powell, Copeland, Taylor, Carl Palmer and Zak Starkey, as well as a couple others, all play drums on the title track.  Wow!

Yep!  This is a classic!

Heres some info Jon probably would be interested in..  He also wrote the following...

But "Voices" is a great song, don't recall anyone covering that.

This is ok. Like Scott, it lost me a bit with "Let Me Down Easy", I got the Bryan Adams vibe totally and this was before reading what Scott wrote. Another song that bugged me a bit was "Move Better In The Night", it sounds like a song in a car commercial.

The rest was ok but the title track has always been great. I was considering getting this album about a year ago, think it's OOP though. Now listening it's not something I would listen to much. I have Roger Daltrey "Gold" so that will do me good.

When I was a young 'un, I was one a serious Who kick and picked up Daltrey's "One Of The Boys" album. And that was that. Daltrey without Townsend just doesn't cut it really. However, "McVicar" is a great album. Good movie too.

And what in the hell is a "Raging Moon" anyway?