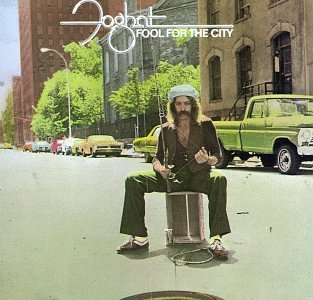 Album: Fool For The City

I've got a band that I have yet to feature here on CRB (they have been a regular staple of the Scott's Hidden Treasure forum, though not this album that I can find).  This week's AOTW is Fool For The City by Foghat.  I have only one nugget for you this week, and that is that this was/is Foghat's first Platinum album.

I would never lump myself into the "fan of Foghat" category, but then again I'm only familiar with Slow Ride, Fool For The City and Third Time Lucky.   Listening to this over the past week does not really change anything.  Slow Ride is a very iconic rock song that everybody know as soon as it kicks in and Fool For The City is a well known song as well. Terraplane Blues has Led Zeppelin written all over it.  It is a Robert Johnson song, so that may have something to do with it.   And the last song that stands out on the good side for me is the album closer, Take It Or Leave It.  It seems out of place to me, sounding more like it belongs on an album by Firefall or even Peter Frampton.

Anyway, whatcha hear is whatcha get with Foghat.  Blues based boogie rock.  That may be why I've never given them much attention.  I will add that the bass playing on this album is phenomenal.  Do you own the album?  If so or not, what do you think of it?

1. Fool For The City

This is an awesome album. Yes, I do own it. I think it's awesome, as I stated before. This sounds really good now that I have a new speaker system for my computer. Was worried that it wouldn't sound as good as my old speakers which were starting to crackle and the power/colume button had a short or something. But, hooked the new ones up and it sounds even BETTER.

I don't find any track here boring or a throwaway. Everything fits in perfectly. Great album from a bunch of guys from England!

I have had this on vinyl for years and years.  I've always hoped for a Deluxe Edition or some real nice treatment for it,  It does deserve it afterall.  The Foghat CD's aren't the best mastering on the market, and I think that's a shame.

Of the many bands that my older brother played as I grew up, Foghat, was one of the most played.  The album I most associate with this band is Rock and Roll Outlaws and the closing track Chateau Lafitte '59 Boogie - probably should have included that on my exclusive closers only playlist, you remember that playlist as its only been done one time...  anywhere.

Next was Foghat LIVE - arguably the most influential live album from the 70's. And then Boogie Motel, which for me, is the version of the band I love the most.  Boogie Motel was played often in my Junior High School and my circle of friends (Yes there is truly a circle and I was in it!).

Then came Tight Shoes and they seemed to fall off the radar.  But not for me.  Watched them open for Blackfoot in 81-82 and the blew them away.

None of the above takes away from the greatness of this album, Slow Ride is the kind of song every songwriter dreams of.  I'm sure they still love those publishing checks to this day!  The title track resonates to this day, Craig MacGregor's bass and Rod Prices slide geetar are still standard bearers.  But the riffs Lonesome Dave writes are top notch and overlooked.  Forget the hits, forget the solos etc etc...  go back and listen to the rhythm geetar work, really very good and shows what strong songwriter he really is.

A lifetime of memories from a great band.  RIP Lonesome Dave!  and Great post boss!

Had this on 8 track, then later vinyl. Good album, great band that really "bought the goods" live. And Scott has it right....Foghat Live is a great album, and one of the better live releases. A boogie filled, good time, rockin' band!

Throwing a party, and its just not happening yet? Throw on some "Slow Ride". If that dont get the ladies to dancing, I dont know what will.

Charlie Huhn from Victory sings with Foghat now. I'm curious about the album Live at the Blues Wharehouse. Stone Blue is also a really good release from Foghat.

Not sure, but the sound bites posted to Amazon sound really good and the reviews are all favorable.