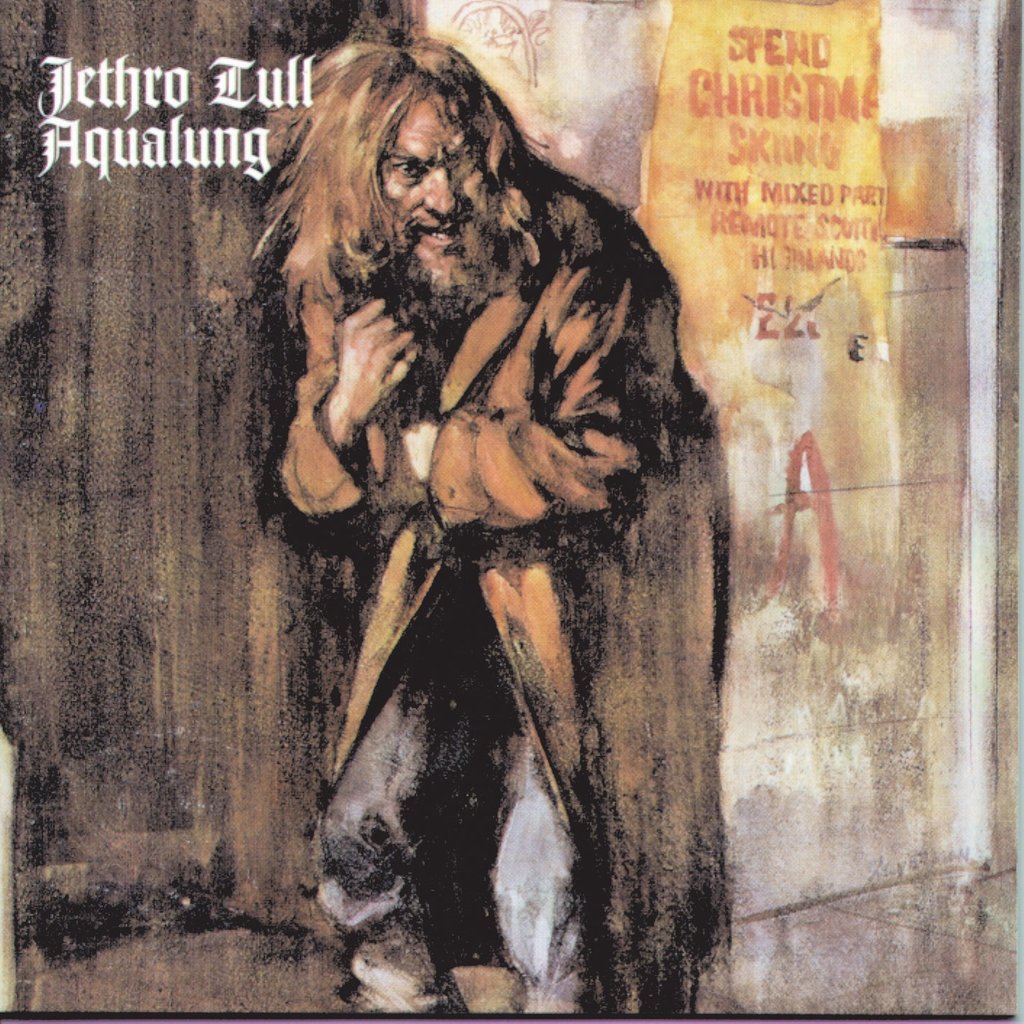 Still in 1971, we cover some British prog this week with Aqualung by Jethro Tull.  This was the band's first album with John Evan on keyboards as a full time member and the first album with new bassist Jeffrey Hammond.  It's also the last album to feature Clive Bunker on drums.  The album features more acoustic work that the band's previous efforts.  The work was somewhat inspired by Anderson's wife's photos of homeless people (that would seem quite obvious with the title track for sure).

Some folks consider Aqualung a concept album, but Ian Anderson says that is not the case. He is quoted as saying:

Although only one single was released (Hymn 43), classic rock radio still plays Aqualung, Cross-eyed Mary and Locomotive Breath quite regularly.  The album has been reissued several times, and the one I have is the Steven Wilson remix from 2011.  This particular version is a 2 disc set with cd 2 being comprised of various stuff that was recorded for but not included on the original album as well as some alternate takes and what not.

Now, for the important stuff...my opinion.  I like it, but I don't love it.  Aqualung, Cross-eyed Mary, Hymn 43 and Locomotive Breath are all very good tracks.  But, as I've stated before, I like the occasional JT song, but a full album of one-legged flute playing may be a bit much for me.  The guitar playing is superb, if only it could replace some of the flute playing.  And I have no trouble with the rest of the music.  For someone like me, this album is cool to own, but I'm probably sufficiently stocked with Tull by owning only this and a greatest hits disc.

After buying (and loving) the double live-album "Bursting Out" in the spring of 1979, I was a fan of this band, but I didn't buy anymore albums until 1987 (I "blame" NWOBHM for the interference) : "Crest Of Knave" or whatever it was called. I didn't like it at all. Something had happen with Anderson's voice, and (as another reason, why I didn't buy albums) most of the band I loved, had been fired by Anderson.

It then took me quite a few years, until I decided to get me some more Tull-albums, and it started in 2001, when I bought another double album, this time a "Best of". It was weird listening to the well-known songs as "studio-song" instead of the live-versions, I had heard countles of times, but it got me to start buying most of all the older Tull-albums, incl. this one.

My favorite Tull-album is "Stand Up" from 1969, and this one is probably on 2. spot. I like all of the songs on the album, but especially the 4 you also mention as favorites.

I certainly agree, that the guitar is great. Martin Barre was the one, that Anderson didn't fire, not until much later on, that is. You should definitle check out "Bursting Out" for some very fine guitar-work from Barre.

It irritates me, that apparently the album has been recorded very low. Maybe it's just a problem for me? I have heard this Steven Wilson remix, and I can't really remember if it's still an issue. Maybe it's just my CD from the 90's.

Definitely one of the great albums of 1971, a very good year in music (album-wise).

But I'll bet, Scott will type some z's.

There is a real chance of dozing off during this one...  I'd take that bet if I was you Niels!

Someone was not paying attention!

Yeah, I'm still not.  Though I will say that you will be disappointed at least one more time during my 70's run.

This is my favorite album from JT. With the exception of #3 & #9 (which are actually "songs" but interludes), all of these are still played on radio today. Just a phenomenal album from top to bottom. Still blows my mind that this came out in '71, definitely something that was ahead of its time. Everything clicks and I guess I'm one of the few that doesn't mind the fluting.

This is the one and only Jethro Tull album I was ever familiar with because y brother listened to it.  He always played Locomotive Breath specifically so its the one track I know best.  But I must say Aqualung is cool opener, its very familiar and the Steven Wilson mastering is terrific (of course!).  The geetar work is better than I remember.  I can't believe all this positive is coming out of me on a Tull listen! I must be in a good mood...

Cross Eyed Mary - certainly familiar but if you told me about it before listening I would have no idea what song you were talking about.  Another nice geetar riff and moments of soloing.  The flute is OK on this one.  Ah, were hear at the infamous 3rd track, the track where all Tull listening experiences end in a snooze...  Cheap Day Return, and this is where the familiarity ends at least for side 1 - OK that was fast, maybe we fall asleep on track 4?  hmmmmm...

Mother Goose is, well, uh, repetitive and boring... not to mention that its also repetitive and boring.  I do really like the sound Wilson gets out of this older recording though.  He's a mastermind! Its whats keeping me engaged and awake right now... Up To Me would be so much better amp'd up and more electric.

My God, some nice acoustic work but the track ultimately falls flat for me, in fact it really do... zzzzzzzzzzzzzzzzzzzzzzzzzzzzz....  Sorry about that, I was really trying not let that happen.  At least Hymn 43 is familiar, nice geetars yet again!  Why oh why wouldn't you really showcase this guys work more?  He's got the chops!

And here we are at the infamous Locomotive Breath!  Probably my favorite Tull tune just by sheer volume of plays it got at my house as young impressionable lad...  Wind-Up is a nice closer!  Hey, that gives me an idea for a follow up to my one and only closers playlist!!

I must say this is a really nice album, and if I was to consider a Tull purchase this would be the one, with the Steven Wilson re engineering being the determining factor.  Nice post and cool era!!!  Actually this album gives me another idea for a SHT topic that I think Jon can really identify with!  I'll leave you guessing until I get a chance to post it...