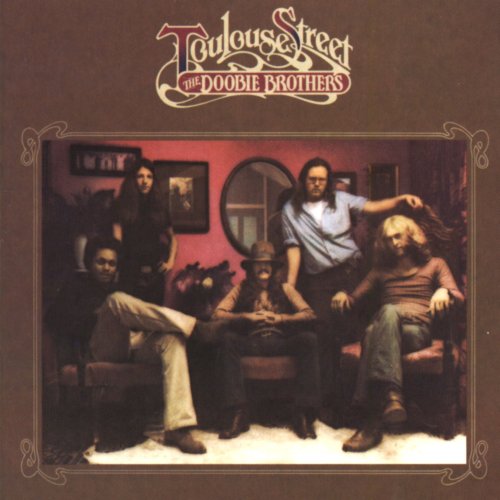 This week's Album of the Week keeps us in 1972.  It's Toulouse Street by The Doobie Brothers.  It is the band's second album.   Toulouse Street managed to score a Platinum award from the RIAA and spawned three of the band's well known songs.  It's the band's first album to feature new bassist Tiran Porter and second drummer Michael Hossack.

There really isn't much information on the album on Wikipedia, so I'll make Jon giddy and quote allmusic.com here:

Toulouse Street was the album by which most of their fans began discovering the Doobie Brothers, and it has retained a lot of its freshness over the decades. Producer Ted Templeman was attuned to the slightly heavier and more Southern style the band wanted to work toward on this, their second album, and the results were not only profitable -- including a platinum record award -- but artistically impeccable. Toulouse Street is actually pretty close in style and sound at various points to what the Eagles were doing during the same period, except that the Doobies threw jazz and R&B into the mix, as well as country, folk, and bluegrass elements, and (surprise!) ended up just about as ubiquitous asthe Eagles in peoples' record collections, especially in the wake of the singles "Listen to the Music" and "Jesus Is Just Alright." But those two singles represented only the tip of the iceberg in terms of what this group had to offer, as purchasers of the album discovered even on the singles -- both songs appear here in distinctly longer versions, with more exposition and development, and in keeping with the ambitions that album cuts (even of popular numbers) were supposed to display in those days. Actually, "Listen to the Music" (written by Tom Johnston) offers subtle use of phasing and other studio tricks that make its seemingly earthy, laid-back approach some of the most complex and contrived of the period.Johnston's "Rockin' Down the Highway" shows the band working at a higher wattage and moving intoCreedence Clearwater Revival territory, while "Mamaloi" was Patrick Simmons' laid-back Caribbean idyll, and the title tune (also by Simmons) is a hauntingly beautiful ballad. The band then switches gears into swamp rock for "Cotton Mouth" and takes a left turn into the Mississippi Delta for a version ofSonny Boy Williamson II's "Don't Start Me Talkin'" before shifting into a gospel mode with "Jesus Is Just Alright." Johnston's nearly seven-minute "Disciple" was the sort of soaring, bluesy hard rock workout that led to the group's comparison to the Allman Brothers Band, though their interlocking vocals were nearly as prominent as their crunching, surging double lead guitars and paired drummers. And it all still sounds astonishingly bracing decades later; it's still a keeper, and one of the most inviting and alluring albums of its era.

So there you have it.  You can find this easily on Amazon.  A Rhino Flashback copy is a mere 3 dollars and 99 cents.  I don't see how you could beat that.

1. Listen To The Music

2. Rockin' Down The Highway

Their debut album is underrated and under appreciated, its fine fine debut album, you should check it out sometime.  This one however is great also.  Lets skip over the 3 massive radio hits that still get loads of airtime and listen to the rest....

Mamaloi could be a holdover from their debut album, would fit nicely.  But the acoustic work of this band is of the highest quality, the feel of their picking is unique to these guys and the spirit in the songs makes them all the more likeable.

Toulouse Street.  See Mamloi!  Simmons can write a song!!  His best work was yet to come though songs like this are great indicators of where he was going.

Cotton Mouth.  Johnston's voice is great!  I have a solo album of his on vinyl - "Everything You've Heard Is True" - its on Amazon for 124 bucks, would love to own it on CD someday but no way for that.  Anyway, I'm not a huge fan of horns in a rock song but it works sometimes, and the southern gospel tinge of this tune works for me. Interesting to know that this song was written by the duo if Seals and Crofts? Must've had some weird infatuation with snakes at the time...

Dont Start Me To Talkin', a killer blues cover, seems to be more Allman Brothers influenced than the 1955 Sonny Boy WIlliamson hit. Great tune!  And these guys know how to play a solo, their musicianship is very high!

Disciple.  A hint of the rockin riffs that were to come?  Has a bit of a China Grove feel in there, just a hint!  Probably the best track on here that didnt hit radio.  Great rock and roll, turn this one up loud!

Snake Man, bluesy closer works well with Cotton Mouth and the overall feel of the album!  Its simple a must own!

This albums is so cool, and you know why? NO MICHAEL McDONALD!!!!

I didn't hear this whole album until a couple years ago when I bought the mini-boxset of five Doobie albums (which is available for $9.99 at barnesandnoble.com and would be even cheaper with a 15% off coupon). Weird thing was that all the songs were familiar even though I couldn't recall hearing this album before.

This album is full of wicked goodness from beginning to end. Not a dud track to be found. Also, NO MICHAEL McDONALD!!!!!

Just a note: I did listen to Doobie Bros last week, please make sure to keep an eye o what I listen to so I don't have to listen to the same stuff over again. Thank you.

Nice pick, with NO MICHAEL McDONALD!!!!

I think this album is one of the more iconic albums of the eary '70's. You can hear the influence of it in the hits of other bands for years after. I do agree with Scott, thier first album is also good, but Toulouse Street shows the Doobies style starting to come together that comes of age on the next few albums: The Captain & Me & What Once Were Vices. Even tho I feel those are stonger albums, Toulouse Street stands right up there with them because of the freshness of the sound & the impact it had on the music scene at the time.

It is interesting to go back & listen to the first 4 albums in sequence to hear the Doobies style developing. More interesting is that Toulouse was actually the third album recorded. A previously recorded demo album was unofficially released later under the name Still Smokin ( also under other names). If you include it with the other 4 you can really hear how the Doobies progressed. Here is an example of a song from that one called "I'll Keep On Giving".  It has a familiar ring to it.

Interesting tune!  Definitely a demo but youre right, great feel for the early work and the tie in between albums.

I love "Listen To The Music", but who doesn't? Another song, that reminds of those great summer-days, when I was a kid.

I do think, I've heard a DB-album before, and that would had been the one, they released a few years ago. I remember it to be quite good.

Otherwise, my knowledge of this band is pretty thin. I am on "Best of"-mode, and know their biggest hits. But I'm sure, they were much bigger in the US, than in Europe.

I remember, I saw a documentary in the late 80's on TV, and thought they were a good band, but kind of like The Eagles, a little bit too boring for my taste. But I certainly prefer DB to The Eagles (Urgh!).

This album is a nice listening, but not an album, that will make me a bigger "fan".

There are some nice accustic guitar on "Toulouse Street", which kind of sounds like a CSN-song, or a Genesis-song from the early 70's, because of the flute. I like this track!!

"Don't Start Me To Talkin'" is stuff we never ever heard on the radio in Denmark in 1972. Good guitar, but not my style overall.

"Jesus Is Just Alright" might had been a big hit in USA, but not around here. Not a favorite of mine. I don't really like "worshipping" (says the man, who saw Neal Morse yesterday, and loved every minute of it!!).

"White Sun" sounds good. Nice guitar, both accustic and electric, and nice harmonies yet again. I don't know who the singer is, but he's my favorite, now that Mcdonald isn't on this album ;-)

"Diciple" huh? They are pretty relegious, aren't they? Yeah, it's rock'n'roll, but I kind of prefer them doing accustic numbers. But it's not bad, just not great.

"Snake Man" ahh, another accustic song. I like accustic guitar today. Probably because of seeing hearing Morse matering it yesterday :-)

I still think, DB are way better than Eagles, and won't rule out, that I one day will buy an album or two. I probably start out with a "Best Of".

If you liked the acoustic work on this, I think their album titled Stampede would be best suited for your tastes (if you were to consider a DB purchase) - anything after that would have Michael McDonald on it and we all know what Jon thinks about him...

Hey! I just got an idea for playlist!