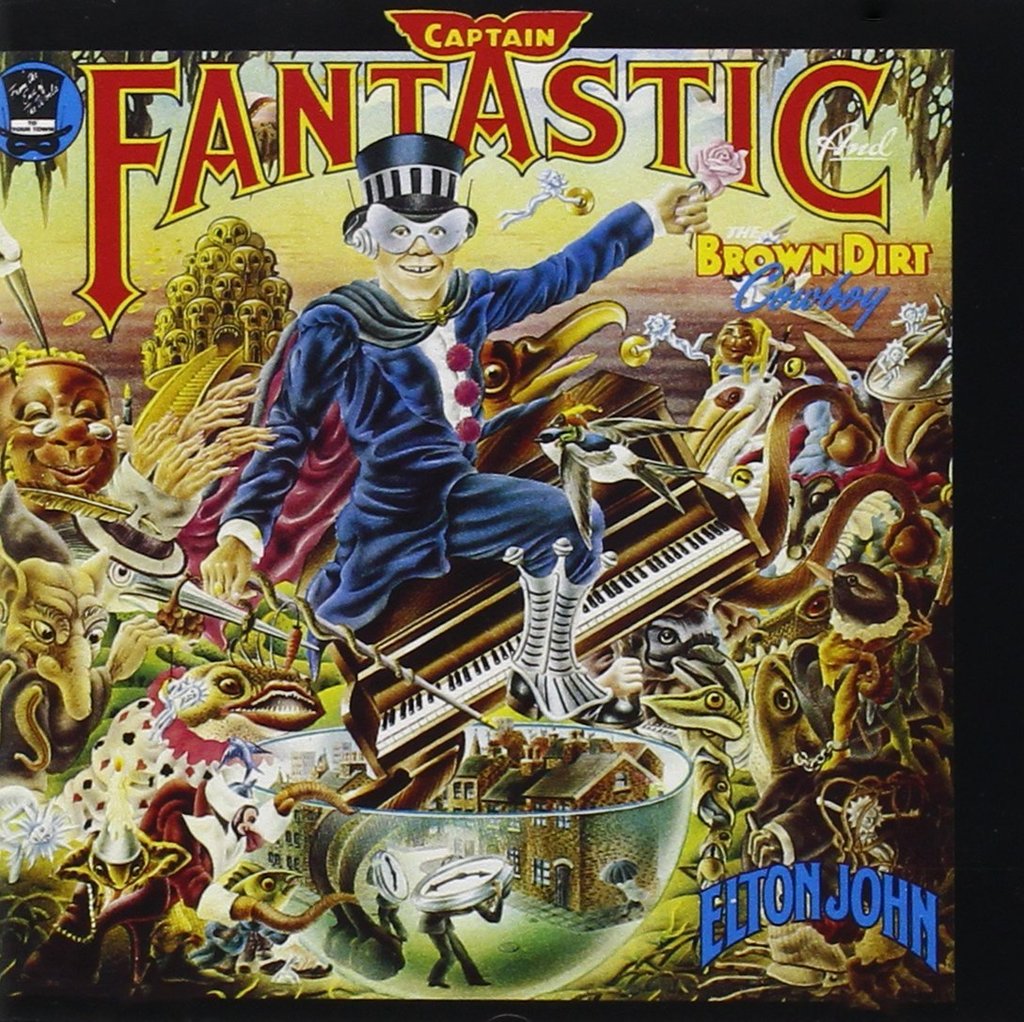 This week we look at Elton John's 1975 album, Captain Fantastic and the Brown Dirt Cowboy.  You guessed it, it's another in the series of number one albums.  Captain Fantastic enjoyed two stints at number one, the first one lasting six weeks while the second one lasted one week.  This one was the sixth of seven straight number one albums for John (one of those being his first Greatest Hits album, which spent the last 5 weeks of 1974 and the first 5 weeks of 1975 at the top).  Triple Platinum was it's final certification, while only one single was released, Someone Saved My Life Tonight, which peaked at number 4 on the Billboard chart.

The album is a concept album that details the early career struggles of John (Captain Fantastic) and his songwriting partner Bernie Taupin (The Brown Dirt Cowboy).  Look, I'm just relaying what I read about the album.  I'm not much into following concept albums, so do with that what you will.  The reissue, which is what I own, and which is what I've featured here, has three bonus tracks.  These were non-album tracks, with Lucy In The Sky With Diamonds and Philadelphia Freedom having reached the top spot on the singles chart.

I bought the album about 7 years ago (I know this thanks to Amazon's purchase tracker) for 8 bucks, but you can get it now for $6.99.  Not a bad deal at all.  And as a little side bar, I guess you've noticed by now that I decided to post the album using Youtube.  Although I didn't upload any of the tracks personally, they are the exact same as if I would have.  You can click on the album cover, as usual, or you can listen directly below.  And I almost forgot, the album cover is way cool.  I never owned it back in the day, but my cousin did, and I loved looking at the album cover.

4. Tell Me When The Whistle Blows

5. Someone Saved My Live Tonight

9. We All Fall In Love Sometimes

11. Lucy In The Sky With Diamonds

The link doesn't work for me.

15 years ago, I started buying all the great albums, I hadn't bought, when they were released, and at a point, I started buying Elton John-albums. I had heard all the hits since 1972 or something like that, and even had a double Best off-album, that I bought in 1990, but not any "real" albums. After buying, and loving the albums "Elton john (1970)", "Honky Chateau" and ESPECIALLY "Goodbye Yellow Brick Road", I bought this one......and was dissapointed.

It's not as good as the 3 albums, I've mentioned, and later, when I got Spotify, I listened to all the rest of the classic Elton John-albums (Tumbleweed, Madman,Don't shoot me and especially Caribou). "Blue Moves" from 1976, must be the last of the classic Elton John-albums, and I like the fact, that it's a double-album like GYBR, but it's not as good. Just like this one: It's simply not as good as the best EJ-albums.

The song "Someone saved..." is probably the best song on the album, and that says quite a lot.

But don't shot me, I'm intitled to my own opinion.

I feel the same way about this album the same way I felt during the week of January 3, 2016 when I listened to this:

First off, this album rocks. Second off, there's not a bum track to be found. I especially like the tracks that lead off each "side", everything else on each of those "sides" blends in quite nicely.

When I first listened to this album quite a while ago, I didn't get it. Didn't like it either. Many years later I decided to give it another chance and was blown away. GYBR grabbed me upon first listen, don't know why this one took a couple listens, but that's the way it is.

Oh, and the youtube idea is ok. It sucks that you forget that it's on this page and you go back to the main page and it stops.

Ya know, if someone ever decided to come up with the idea or even a playlist of great album closers, "Curtains" certainly makes the cut.

That's why I linked it to the album cover.

Well, I saw the player on the page so of course I would play it from there.

I love this album.  In fact several tracks have been featured on SHT lists from it so I guess I'll take credit for turning you on to it...  Kinda like that time I came up with that brilliant, one of a kind, never been done before "Closers" playlist.  I still get email and posts of admiration for that one...

Bitter Fingers is my favorite hidden gem though, just a cool piano track!  But tracks like the bluesy Tell Me When The Whistle Blows are just cool too!  There's not a lot of fault to be found in Johns album from this era.  I will agree with Niels that Blue Moves is an awesome double album but it wasn't a critics favorite.  And it did indeed end his run of greatness IMO.  He would return to periods of creativity and great music but he really wasn't able to string them back to back to back like this.  But I digress....

Maybe if you really wanted to nit-pick you could say this album is fairly mellow.  Curtains, while it would make a great addition to a closers playlist, is rather slow moving, but I agree with Jon, its a cool tune.

I believe I also hit on another stroke of pure genious when I posted a greatest album covers thread sometime back as well.  fun posts...