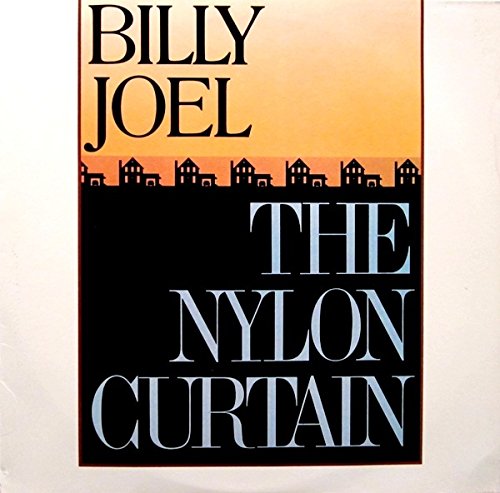 The Piano Man is front and center this week.  No, not that album, but Billy Joel's 1982 smash The Nylon Curtain.  Did I say smash?  Yes I did.  The Nylon Curtain is certified Double Platinum by the RIAA.  It followed consecutive number one albums into the Top 10, topping out at number 7.  Two Top 10 hits (Allentown at #17 and Pressure at #20) and Goodnight Saigon (#56) comprise the three singles released from the album.

The album was produced by Phil Ramone and, according to Wikipedia, was one of the first albums to be digitally recorded, mixed and mastered.  Of course, the three singles are all phenomenal, especially Goodnight Saigon.  It is really an all-time favorite of mine.  You can really hear Beatles influences all over.  I personally think that the songs Laura and Scandinavian Skies would sound great covered by Cheap Trick.

Availability: $5.89 US dollars on Amazon

Oops, thanks for adding it for me.

I don't have this album but I recently picked up a used copy of Joel's Greatest Hits Vol. 1 and 2 on CD. It replaced a long worn out cassette copy. The three singles you mentioned are on the disc.

I love Joel's hits but other than that GH release I don't own any of his albums otherwise.

I'd recommend picking up The Stranger if you ever get a chance.  I like this album as well.

I really didn't like BJ until this album came out. Thought he was too wimpy, even though he did rock out on his previous album. I heard something from this album that intrigued me so bought it on cassette and then when he dropped the F bomb, considered him a wimp no more. This is my favorite BJ album, and it did open the door for me to get other BJ albums, so that's pretty cool.

The Stranger was my intro to Joel, which turned into immediate purchases of 52nd Street and Glass Houses.  All 3 of which are freaky good!  I have no good explanation why I missed this album as I heard the hits songs and liked them but it never translated into a purchase until much later.  I will say this though, the album An Innocent Man really threw me off, Ive never cared for that album or its hits.

As another side note I recently watched the documentary title "Hired Guns" on Netflix and a considerable amount of time was spent on Liberty Devittos story - cool drummer who, from what I can deduce, got the shaft from Joel.  Lost some respect for him because of it.  I hope they make amends and work together one more time because he's a big part of these albums and how they sound!

Not my favorite Joel album but its definitely a must have!