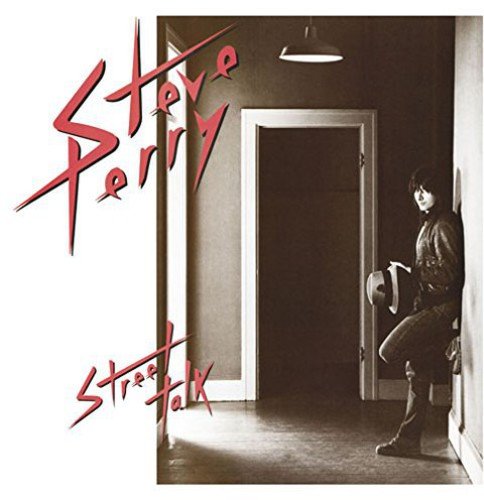 Steve Perry is up to bat this week.  I've got his debut solo album for you this week.  Street Talk was released in 1984, in case you don't remember.  It was one of only two solo albums to date for Perry.  There has been talk that he is working on new music, but I believe it falls under the "I'll believe it when I hear it" moniker.

Anyway, Street Talk was almost a Top 10 album, just missing at number 12.  It sold enough to earn a Double Platinum certification from the RIAA.  The album did produce four, you read that right, four Top 40 singles.  I mention that because I had a Facebook discussion with my good friend Randy Parker earlier this week regarding that subject.  I claimed that Perry was a two-hit wonder as a solo artist.  Randy disagreed on the strength of the fact listed above, that four of the singles cracked the Top 40.  My argument was that despite that fact, the average music fan would only be able to name two solo songs by Perry.  What is your take on the subject?

As far as the singles go, the two you definitely remember are Oh Sherrie (#3) and Foolish Heart (#18).  The other two that you may or may not remember are She's Mine (#21) and Strung Out (#40).  And I will say that after listening to the album today, She's Mine did ring a slight bell, but it was very slight.  It's a terrific song none the less.

As far as availability goes, you can pick it up on Amazon for $5.99.  And that includes five bonus tracks.

7. You Should Be Happy

9. Captured By The Moment

This is one of my favorite albums. and for me I think the entire 10 track original release has not a bad song in the bunch.

Great choice this week and I remember all four of the singles. However, I remember "Strung Out" more for the fact that it was one of my favorites from the album rather than because it was a single release.

I actually have this on cassette still I think. But I also have the CD release with the bonus tracks and will be taking that to work with me today!

So you're saying that my post has inspired your music selection for the day...nice!

As far as the singles go, do you remember hearing them on the radio?  That was really my point, that the only two that the vast majority of people remember are Oh Sherrie and Foolish Heart.

I remember "She's Mine" for sure. Because I remember singing along to the song and thinking how this sounded like a guy basically saying "Screw You" to some other guy going after his girl. I can't be completely sure about "Strung Out".

By the way, I've listened to album here at work and I had a couple of thoughts. First, the five songs added as bonus tracks are okay but none of them really would've fit with the original track listing.

Second, besides the singles, my favorite two tracks would be "Running Alone" and "Captured By The Moment". Those two songs might just be in the top 3 from the album for me. And yes "Oh Sherrie" would be the other one. No matter how many times I hear that one, I get a charge from it. It's really a song that resonates time and time again.

This is ok, I guess. Never desired to get it but do have his greatest hits album so that covers what I want when I want it. It's kinda what I expected, more mellow than Journey with a few that rock out (a bit). As for track #8, the sound of those children (child?) is downright evil. There's just something a bit off there. Not that there's nothing wrong with evil unless there evil spawn.

Yeah.....that was a typo.  But thanks to my editor, it has been corrected.