Most Likely To Skip: Are You Kidding Me?

Continuing with the 80’s pop theme from last week, Journey’s blockbuster Escape is up for review this week.  What?  You say Journey is classic rock, not pop?  Well, in the 1980’s they were pop.  But that’s when pop music was cool.  Released in 1981, Escape made it all the way to number one on the Pop Albums chart.  Out of the five singles released, four of them cracked the Top 20, while three of those made it to the Top 10.  That’s not too bad for a true rock band.  It has sold in excess of 9 million copies since it’s release, leaving it just short of Diamond status (if they recertified it today it may very well reach Diamond, especially with Journey’s resurgence since Don’t Stop Believin’ was featured as the final song on The Sopranos and became a hit again with Glee).

Plain and simple, I love this album.  I’m sure you can tell with it’s final rating.   I listened to it many, many times in my youth.  The band makes a nice mix of rockers and ballads on this album.  The hits are outstanding, as are the album cuts.  Really, seriously, there is not one bad song on this album.  Mother Father is possibly my favorite Journey song ever.  I don’t believe Steve Perry sings any better on any other song.  That’s not to say he sucks on other songs, I just love his performance on this song.  As a side note, Dean Castronovo, the current drummer, does a great job of filling Steve’s shoes when they do this song live now.  If you don’t believe me, just google it.  Lay It Down, Keep On Running and Escape are also a tremendous album cuts.

The album art is very good.  I like the "escape" theme and the colors are cool too.  You can pick this up from Amazon for 7 dollars.  I can’t think of any reason that you, as a rock fan, should not own this album (even you Niels).

Did You Know:   An Atari 2600 game, Journey Escape, was made based on the album. 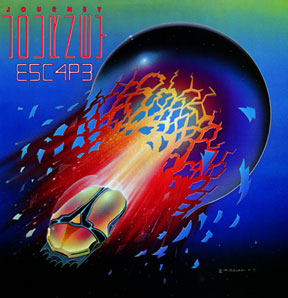 I would listen to this and review, but Ive heard it a gazillion times, and I never exaggerate!  Definitely overplayed, but the deal with this one is its still sounds great and fresh!  I dont get the Mother, Father tune though not one of faves much to your shagrin I am sure...

Anyone know what "shagrin" means?  I cant believe I used that word in a reply.