Most Likely To Skip: One World

Did You Know: "Walk of Life" was a number 2 hit for the band in the UK in early 1986 and a number 7 hit in the United States later that year. The song was nearly left off the album, but was included after the band out-voted producer Neil Dorfsman.

So how does a classic rock band (other than Journey) get lumped in with a bunch of Pop/Rock artists?  Well, they release an album that spends 9 weeks at number 1 in the U.S. as well as 10 weeks at number 1 on the British charts.  In addition to that, said album is the fourth best selling album in UK chart history, sold 9 X Platinum in the U.S., and has sold in excess of 30 million albums worldwide.  Did I mention that the album contained a U.S. number 1 hit (Money For Nothing).  Just face it, Dire Straits, the classic rock band in question, became pretty popular by releasing Brothers In Arms in 1985.

So what does that mean to you and me.  Nothing, really.  But this is a fantastic album.  And that's coming from someone who is not particularly a fan of Dire Straits and who just recently purchased this album himself.  The thing I think about with this album and MTV is not the Money For Nothing song, but the video for Walk Of Life.  It's a terrific sports/rock video.  I won't bore you otherwise with which songs I like best, let's just say I think they are all pretty good.

It's still available at around 9 dollars new or 5 dollars used.  I certainly recommend it.

Next Week: More pop from a band that didn't start out that way. 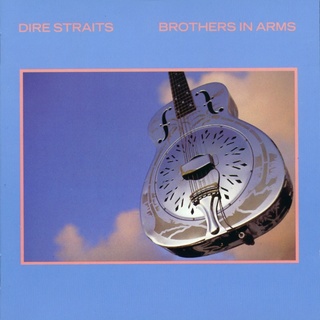 Two of the best DS-tracks appear on the album: "Your Latest Trick" and the title-track (great video, by the way!!), but add the theme from the movie "Local Hero","Private Investigations" and perhaps "Tunnel Of Love" and you got the tracks, I like by DS. Man, they looked silly in their 80's-outfits at LIVE AID!! Nice cover, though!!

Permalink Reply by TageRyche on August 4, 2011 at 6:18pm
The first three tracks on the album are my favorite. I would guess that is partially due to how often they were on the air as singles.

Permalink Reply by Jon on August 9, 2011 at 10:45am
Another of those albums I got tired of because of the 2 songs being overplayed. Found a copy a while ago for cheap and it's a good album but not as good as "Making Movies" or "Love Over Gold".