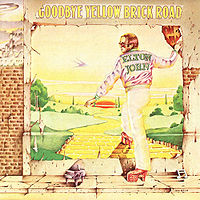 Okay, this week we have a special, mid-week edition of Album Of The Week.   A special thanks goes out to Niels for the request of
Elton John's 1973 double album, "Goodbye Yellow Brick Road".  This
album was packed full of material, 17 songs making the final product.
I'll mostly go through the songs that I like.  The album itself reached
Number One in the U.S., the U.K. and in Australia.  Four songs were
originally released as singles in 1973 and 1974, with "Goodbye Yellow
Brick Road" reaching number 2, "Saturday Night's Alright For Fighting"
reaching number 12 and "Bennie And The Jets" reaching number 1 (the other single was Candle In The Wind) on the
Billboard Singles chart.  The album is also certified 7 X Platinum in
the U.S. and, according to Wikipedia, has sold at least 31 million
albums worldwide.

I really like the first track, "Funeral For A Friend/Love Lies Bleeding".  The first half of the song really just
sounds like a very long intro, but at eleven plus minutes, it's still a
cool song.  "Candle In The Wind" follows in the second slot.  This song,
to me,
has a very
interesting past.  It reached number 7 in the U.K. in 1974, and the
live version (recorded in 1986) was re-released in 1987 and became a
bigger hit, reaching #6 on the Billboard chart.  And it wasn't over
there, because Elton re-recorded it with alternate lyrics in 1997 after
the death of Princess Diana.  This version of the song reached number 1
on almost every music chart and in every country imaginable.  I don't
ever remember hearing it myself until the 1987 version, but I do think
it's a good song.  Then another interesting song follows, "Bennie And
The Jets".  This was another huge hit, and I always thought it was
actually recorded live, but those are just effects added by the album's
producer.  This is actually one of my least favorite songs by Elton.

Whew!  And that's just side one of album one.  We still have 3 more sides to
go.  Side two of the first album kicks off with my favorite
Elton John song, the title track here.  "Goodbye Yellow Brick Road" is
just a beautiful song.  Two tracks later, "Grey Seal" is a very good
hidden gem.  I only bought this album within the last year, and I've
just finally listened to it.  I've never heard "Grey Seal", but I like
it a lot.  Another hidden gem here is "I've Seen That Movie Too".  Wow,
some really nice guitar work by Davey Johnstone.  Definitely check it
out if you've never heard it.

Side one of the second album doesn't do much for me, other than "Sweet Painted Lady", which is pretty
good, and "All The Girls Love Alice", which is exceptional.  I see that
backing vocals on this track were done by Kiki Dee, who eventually had a
huge hit with Elton called "Don't Go Breaking My Heart".  I would
definitely say that "All The Girls Love Alice" is way, way underrated.

I don't really care for the first track on side two of the
second album, but that is more than made up for by track two, "Saturday
Night's Alright For Fighting".  I remember how much my sister loved
this song when I was growing up, and I can understand why.  It has a
super powered riff and rocks more than any other Elton John song ("The
Bitch Is Back" is a close second).  Of the album's last 3 songs, "Roy
Rogers" is pretty cool and "Harmony" is okay.

So overall, I think this is a really good album by Elton.  He has had so many hits
over the years, but this album shows that he has given us many hidden
gems and album cuts as well.  The artwork isn't bad and it seems very
representative of Elton's style and fashion sense at the time.  You can
find the remastered disc quite easily on Amazon and very reasonably
priced at $11 new and less than $3 used.  I really can't see any reason
why any classic rock fan doesn't own this album, but what do I
know?

Permalink Reply by Niels (Mod) on August 11, 2010 at 4:20am
I absolutely agree, RJhog, that "Funeral for a friend/Love lies bleeding" is a great song, and that "Goodbye yellow brick road" is Elton John's best song (runner-up is "Your song", but that's another album).

I (allmost) allways skip "Candle in the wind", though. I think it has something to do with the "tribute"-song for Diana's funeral. Something like that, is "much too much" for me.

I don't think that there are any bad tracks left, exept "Jamaica jerk off". That's a "skipper" as well.

(Look out for a Elton John "Group"-page)

Permalink Reply by Andy DiGelsomina on October 16, 2010 at 7:48am
I agree about the skipper songs. Candle in the Wind is really worn out, worse than most Zeppelin tacks. Love Lies Bleeding is like Elton John Metal, a terrific song with a really hot guitar solos. I love how there are so many styles incorporated throughout the album, I tried to take a similar approach with my opera.

Permalink Reply by Scott on August 11, 2010 at 8:16am
Besides the radio hits, I love THis Song Has No Title, Grey Seal, Social Disease, and Harmony... (with special emphasis on Harmony)

Candle In The Wind is a candidate for most oveplayed song in history. Im not knocking it, I'm just sayin'..

Permalink Reply by RJhog (Admin) on August 11, 2010 at 10:45am
I do agree with the point about Candle In The Wind being way overplayed. If it had never been re-released live or re-recorded in 1997 for Princess Di, it would have been much more of a hidden gem.