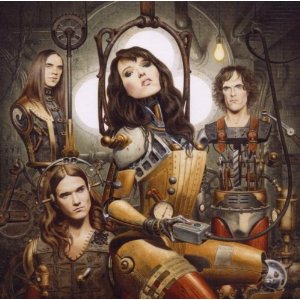 Singles: I Get Off/It's Not You/Familiar Taste Of Poison/Bet U Wish U Had Me Back

Song Of The Week: I Get Off

Jon's goin' hard rock with his post, so I'll do the same.  Halestorm, while not all female, is fronted by Lzzy Hale (I have no idea why they forgot the i).  This is a modern band that released this, their self-titled debut way back in 2009.  As usual these days, the album went nowhere as far as the charts were concerned because it's not poppy-schmoppy bullshit.  That being said, it did manage to hit the fortieth spot on the Top 40 chart.

The songs are quite heavy, not metal heavy, but hard rock heavy, and Lzzy has a very good voice.  Lyrically it get's a bit high-schoolish at times, but that's okay.  It's only rock and roll and I like it.  I wouldn't say anything just stands out to the point that you have to hear it again and again, but it's all decent.  Give it a try anyway.

The band has a brand new album coming out in a week and a half and I'll probably get it.  This one's easy to find.  You could probably even pick it up in a Best Buy.

Next Week: Don't know yet, I'll keep you guessing.

7. What Were You Expecting?

11. Nothing To Do With Love I agree with your assessment here. Nothing really stood out, but I liked it! It was just good hard rock, like I was raised up on.

Not bad at all. If I had to pick a favorite song it would be Dirty Work. Don't know why this would be grouped under Alternative Metal, doesn't really sound that "alternative". Overall I was pleasantly surprised.

I almost made Dirty Work the song of the week, maybe I should change it.

Glad I'm getting to hear this!

Track one - I'm liking right off the bat. The guitar lead is short, but very good. Nice opening track, for sure!

Track two - she is a powerful singer! Slower and more mellow than the opening track, but still a fine tune.

Track three - chorus has that "hit song" feel about it. But for me, the weakest track so far.

But anyway, instead of continuing a song by song breakdown, I'll just say that this is a pretty good listen, for sure. Purcahse for me is under consideration...may buy it, may not, but glad to hear it. The harder, heavier tunes are just that...so I'm a little suprised that some of the record is more mellow, or popish. But diversity is a good thing in music!

Best tunes for me on this are "It's Not You", "I Get Off", "What Were You Expecting?", and "Dirty Work". Good post, thanks for sharing!

Last comment...the final week of Women's month was the best, in my opinion!

Gordon, if you're on the fence about it, hold off for a couple of weeks.  The new album comes out next week and I'll probably get it, and of course I'll post it in NMC on my next go around.

Gordon, I changed my mind.  I'm not buying this.  There are only a couple of songs that I like.  You can listen to the full album stream HERE.  Sorry to do that, but at least the full album is streaming so you can make a decision on it as well.

I'd say your right, good but not great and certainly nothing that make me see them as unique or having their own sound.  Pretty mainstream actually but I do like that they are melodic at the core of the music, which suits me fine!  But I dont hear anything that makes me want to listen again...

Actually since your all talking about Dirty Work, I liked that one best too. But, when it started I was actually hoping it would be a cover of Steely Dan's tune!  But alas...  I was wrong...

Permalink Reply by RJhog (Admin) on April 6, 2012 at 8:19pm
That Steely Dan tune is awesome. I like the Shaw-Blades cover of it as well.