I can not believe that this album came out last year and I wasn't waiting in line for it. I have been following these guys for a few years now and absolutely LOVE their first 2 albums, 2008 Pride of Texas and the 2010 Rollin'. I am talking of non other than TEXAS HIPPIE COALITION with this 2012 release Peacemaker. I know I was MIA for a while so I apologize if someone posted anything on this already. And if not...well you will be delightfully surprised and I hope thankful that you get first from me. 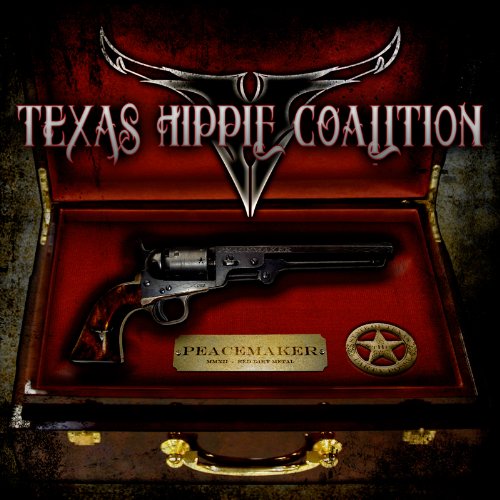 In staying true to their formula of straight on heavy riffing ball punching rock n roll this album does not disappoint. On first listen I didn't quite think it stood above the previous releases, but now I am jammin to this for about the 4th time and I am glad to say it surpasses the first 2 albums.

Heavy bass that can easily be heard (or rather felt), some fabulous "geetar" and solid drum work. All this capped off with Big Dad Ritch's solid whiskey smokin and weed drinking vocals.

Their style of southern heavy outlaw rock, which has been referred to as "Red Dirt Metal" (love the term) focuses on boozin' the "Waylon whiskey", smokin' the "willy weed", breakin' the law and girl, girls, girls. What more can you ask for? I am glad these guys are able to stick together and turn out another.

It has not been posted.  Gordon is a fan of this band, but that's all I really know about 'em.  I'll listen shortly.

Like I said, Gordon is a fan.  I'm not really a fan.  There is some good guitar work including some nice riffage, but otherwise it's forgettable for me.

Now I did like Paw Paw Hill a bit, it reminded me of Black Stone Cherry, and so did the last track.  Peacemaker is probably the best track here.  How 'bout those lyrics on track two, first verse?

Couple of these tunes are pretty darn good.  I liked the opener, Outlaw, Turn It Up,

I think their use of certain offensive words is not really enhancing the listening experience.  I've often said that its always about context, but anymore its just about the opportunity to use it.  So I think the context isn't right and it limits the appeal of the tunes.  My opinion only I'm sure...

On the bright side, its very cool to hear their use of the geetar and soloing.  There is some Skynyrd moments, and not Ronnie's Skynyrd, but some of the newer stuff.  And just like new Skynyrd its pieces and parts that shine but almost always the geetar is real good.

I couldn't get the last three tracks to load, I suspect this is an issue on my side so I will have to catch those a little later.

Cool post, though its not for me I do love hearing new stuff!

It's not an issue on your side Scott.  I have that problem all the time.  Usually I just let it reset to whatever track it wants, then I manually change back to the track that wouldn't load...it normally works.

I like this. Have heard of 'em, never listened to them though. This kinda reminds me a bit of Rob Zombie going the country-rock route. Really nice and heavy geetaring throughout. Perfect music to crank up on a long road trip with the top down.