Time for yet another Artist Showcase. This time it's the "Real" Jefferson Starship, were going knee deep, not in any Hoopla, but in Rock and Roll, you know before they built that city!

that incarnation was not one of the real Jefferson Starships

Jefferson Airplane - Starship or whatever. I have some interest in that band, and have tried a few times to "get in to" their albums, but it didn't sound like what I was "looking for" at those times. I was one of those, who bought the single "We Buildt This City" and liked it back in 1985.

1. Still hippies, it sounds like? Not bad, but I picture a lot of naked hippies dancin around, and that's both good and bad. Mostly bad. Too long a song, though. I don't really care for hippie-music, and therefore I'm no big fan of Hendrix for example. And maybe this.

2. Grace Slick has a good voice, but again...they still sound a bit like hippies. Still, it's not bad, but noting I would want to listen to again.

3. Hmmmm...is it wrong to mention Grateful Dead? Don't they kind of sound like this as well? The Dead I've heard, I kind of hated. I don't actually hate this, but it's goddamn near. No, hate is a strong word. I don't really care about this kind of music. I honestly don't know, which song is the best/worst so far, even though they sound different to each other. I guess, I just don't care.

4. Oh no, another 6+ minutes song!! And another "in through one ear - out the other"-song for me. Still not bad....now, I'm thinking Santana, probably because there's some guitar on this track, but...I don't care about Sanatana as well. I certainly prefer this band, as they were in the 80's...or 60's, I don't really know much about them to choose, but I guess we can rule of the 70's.

5. 6+ minutes yet again!! The sound is more polished now, which is good to my ears. I like the guitar on this one, but the song ain't much better than the others. Always when I hear Slick, I think about, that she said in an interview once, that in the 60's she flashed her beaver a couple of times, at different concerts from the stage. Now that, I wish I'd seen. Back to the song......

Nah, this is definitely not for me. Interesting, though. I'll give you that.

Niels, who doesn't like naked hippies who flash their beavers?  I think you do to, you just wont admit it online...

Now, who would make that decision whether one incarnation is "real" or not?

That's like saying the "real" Styx was before Mt. Gowan. That's imply not true and everyone knows dat!!!!

Let's just say that Paul Kantner would be the one to decide which Jefferson Starship is "real" and I'm guessing he would say that all of 'em were real.

I feel this list is very selective and it's just music Scott wanted to hear and he's trying to force what HE wants to hear on us.

Hey, I actually have all of these except "Blows.....". Don't know why I don't have that. Probably because I like The Empire and I am against any blows against it.

What's really strange is that the first album was about Star Wars and they had a song in the SW Holiday Special. Coincidence? I think not!!!!!

Fun Fact: Did you know that Darth Vader's screen name was Red Octopus?

Fun Fact 2: Did you know that Scottie Gabbert was named after a character in Star Trek?

Maybe I'll do some more but only the ones Paul Kantner and Grace Slick were a part of....  And I hate Star Trek 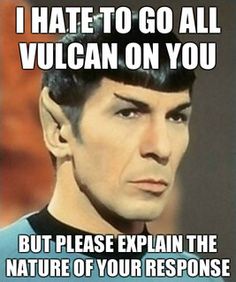 Well I was thinking about adding a second edition of this SHT list, you know there were still some Jefferson Starships to come...  But stay tuned and I will educate you on the topic.

Blows - So is this a solo album or is it Jefferson Starship?  If it's a solo album, it wouldn't fit.  Anyway, I guess it's JS.  I love the guitar on this song, which would make since because Craig Chaquico's guitar work on Modern Times is amazing, which makes Craig Chaquico an amazing guitarist.  I guess the female voice is GS.  This is pretty good. Oh, maybe this wasn't Chaquico, but it was still good playing.

DD - This is way cool.  The funk.  The bass.  The guitar.  Slick.  Very nice song right here.  But again, is it Jefferson Starship?

St. Charles - This has a very dreamy production to it.  I like it.  Balin could really sing.  There is something that I really like about two voices singing together.  Who sings with Balin on the verses?  Also, sounds great when Slick comes in.  Another very good song.  And if this song doesn't prove to you how amazing Chaquico is, you're The Pinball Wizard...

LTG - Probably the least good song here, but still pretty good.  Slick sounds good and it's nice to hear her get a lead here. Maybe the lack of lead guitar moves this to the bottom of these five tracks.

Red Octopus is a must have, but I love Earth better for sentimental reasons.  Im glad you hear it!