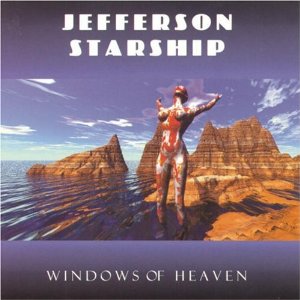 About a month ago, I was talking to someone about the new theme I was working on and mentioned that this was one of the albums I was going to post. He stated that he listened to this album once and hated it. Of course I had no choice but to call him stupid and then a mighty ruckus erupted, security was called and we were both banned from Starbucks at the Ren Cen.

Around this time, the wonderful Mike Pell (when he's not singing) played some Jefferson Airplane on his show, someone mentioned Grace Slick and someone mentioned Jefferson Starship and for some reason a mighty ruckus erupted with virtual fists being thrown, internet security was called and everyone was banned from a couple of nasty sites.

What I'm trying to say is that there's been a lot of discussion about Jefferson Airplane/Jefferson Starship/Starship/KBC Band recently and I'm not posting this because I'm jumping on the bandwagon.

Nope, I posting this since it was the first release from Jefferson Starship since 1984's "Nuclear Furniture" making a grand total of 15 years between releases which fits into my latest theme.

Who's in the band? Paul Kantner, Jack Casady and Marty Balin along with Prairie Prince (The Tubes), T. Lavitz (Dixie Dregs) and Diana Mangano who sounds quite similar to Grace Slick (who  appears on one song and it's up to you to figure out which one).

WAS IT WORTH IT?

(WARNING: Contains some words that certain folks might find offensive. But not me. I have no class.)

Availability: OOP, but can be found used for around $5.

Good thing whoever that person was got a chance to finish their cinnamon coffee cake first or else it could've been worse!

I'll say! Just wish I was there for the throwdown!

That first tune is pure Kantner, no mistaking his writing style.  I do like the voice of the new gal, Mango was it?  And its really nice to hear Marty Balin singing so well...

I do really like the fact that Casady is back in the band since he was a charter member (What band did he leave Jefferson Starship for?)  What I do miss is the geetars from Craig Chaquico, man he was so good!

Those first 4 songs are solid Jefferson Starship tunes that would fit nicely on Dragon Fly, Red Octopus,  Spitfire, or Earth.  The opening track would also work on Freedom at Point Zero as well...  The Title track is smokin hot!

So this Starbucks drinking, coffee cake eatin yuppie dude was wrong!  So sue me!  errr....  I mean so sue him!

Hopefully, the wounds healed on your the yuppie's body. Hopefully you  he is never wrong again.

This is a pretty good album.

---The female vocalist is good.

---I do recognize Balin's voice.  I like all of his songs.

---Like Scott, I prefer Chaquico, but whoever is playing lead here is decent as well.

---My favorite JS album is Modern Times, but I just picked up Red Octopus and I think Spitfire from the flea market but have not had time to transfer them to mp3 format.

Yes, Kantner is and it's Slick Aguilar on geetar.