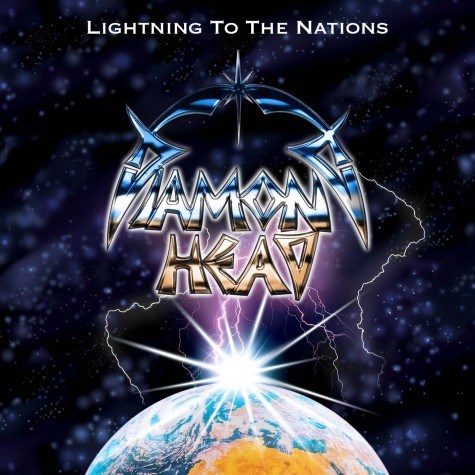 I'm sitting here thinking what other people here were doing in 1981. Then I stopped thinking about that because I didn't care. Plus, even though I know what they were doing and what they were listening to, they would adamantly deny the truth as only I could know. Ya dig?

Anyway, look at any list regarding NWOBHM, and guaranteed you'll see, along with the likes of Saxon, Angel Witch, Iron Maiden, Raven, Tygers Of Pan Tang, Def Leppard, etc., etc., Diamond Head. Now, I could go into a long detailed writeup on Diamond Head, but you can find it on the internet (which is never wrong).

Sad thing is, along with other bands in the NWOBHM category, after a couple albums, they just lost it, either due to band squabbling or pressure from the stupid record companies or sheer stupidity. But hey, we were all young back then and mistakes were made.

Wonder how many folks were introduced to Diamond Head because of Metallica? Hmmm.....

1. Lightning To The Nations

Availability:"White Album" around $10 and a deluxe version of "Lightning To The Nations" for around $20. Crap, now I'm confused again.

Note 1: I'm a jerk so I'm only posting the 7 tracks from the original album and none of the extra tracks even though they're quite good.

Note 2: I used the album cover above since it's colorful.

Note 3: Everytime I visit or talk to my mother, "Am I Evil" pops into my head. Is that wrong?

I used to want some Diamond Head albums, due to Metallica, but I never got around to getting any. The store that used to stock the band is long gone. :( I used to have various NWOBMH compilation CDs with the band. I can't remember what the titles of the albums though, if I could I would try getting them back from ebay.

Never heard 'em but have heard of them...  They were prominent on the Metal Evolution episode featuring the NWOBHM bands.

This is an interesting listen but only because I loved that episode and was so curious about these guys.  Turns out the tunes are actually pretty good but clearly not as good as the bands who broke big out the NWOBHM.  Sonically its disappointing, but that may be a production issue more than anything else.  The drum fill at the beginning of helpless actually made me smile it sounded so out of place and so late 70's.

It is production, it's an interesting read about hos this album came about. I like it because it sounds so raw.

Nice post Jon.  I have been wanting to hear this band.  You are correct when you say it's raw.  The production is pretty bad, but the old school metal is cool.  I really like the second track (The Prince).