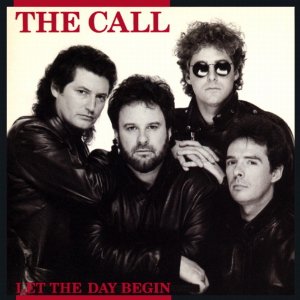 From 1989 I give you "Let The Day Begin" the fifth studio album from The Call.

They've been mentioned a couple times here and on Facebook recently so why not post an album? My interest grew when I heard the title track on an internet radio station last year, a song which I had not heard in quite a long time. It was a song I had almost completely forgot about so I found a greatest hits CD and was surprised with how many songs off that comp I had heard before and how all the songs were quite good.

Now, they might not be a lost group since they did sell some, but they didn't sell monstrous amounts so I decided to post them this week. Interesting to hear if anyone has this album or if any of the songs ring some of them cobwebbed bells in their noggins.

Note lead singer Michael Been's voice. Quite emotive (that's my word of the week), especially with that title track. So emotive, it's hard to get the song out of your head. One is dead and the other is daid.

Not really dead, but kinda.

I found this CD discount, I listened to it once. I'll revisit. Let The Day Begin is quite good though. I think this was 0.99 for the CD! :) I've never heard of the band otherwise. Pretty lost if you ask me.

This is one of those bands that I knew of but never really heard much of, or if I did it didn't stick.  And so this is how this listening experience is going as well.  Like most of everything I'm hearing, and I agree with Van that the opener is pretty dang good!  But other than that nothing else is overly memorable.

I suspect this is one of those bands like the Smithereens (but way way better) in that if you like them then they work for you, but if they don't well then they are just OK.  Jon, Niels and RJ and I all have "pet bands" that don't work well on this site for some reason, mine would be bands like Prism, and I love them and that's, at the end of the day, the way its gonna stay...

What a strange album.  And I mean that in a good way actually.  At times I think it's country, then new wave, then I hear some killer geetar work.  Here are some individual observations:

1. This would be a very good country album from start to finish for Big and Rich.

2. Best song overall is Jealousy.  It is really haunting and has one of those killer geetar solos.

3. For Love was a unique sounding song.  I got a serious Jim Morrison vibe from the vocals.

4. Closer sounded like it could have easily been a Roy Orbison song.

5. I don't think this album is great, but it was a very easy listen.  I may even check it out again.