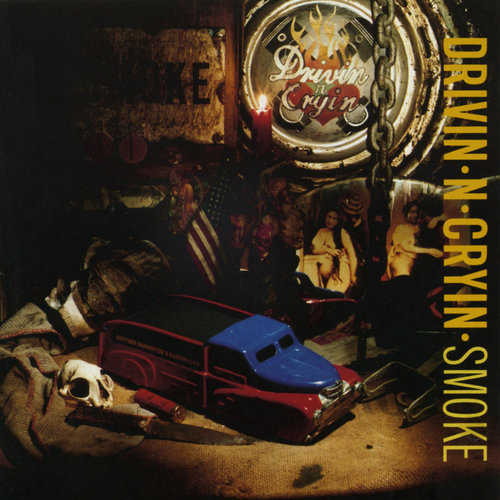 NOTE: Due to space constraints, the L/F music players will only be available for your listening pleasure for about 2 1/2 months. To listen, just click the album cover above and it'll take you directly to the music player. Well, at least for now.

Third off, I want to thank all those that listened to the Goddo post a few weeks ago. It makes all that effort mean oh, so much more. Thanks, Rjhog!

And then he does this: "This week I'm starting a Southern Rock swing. Jon may even join me." Say what?

Nobody backs Jonny into a corner. Nobody. Yet, instead of posting what is quite possibly the greatest album you have never heard on its 50th anniversary, I had to scramble out of that corner and try to find something country-rockish just to prove that, even though I might be in that corner, I will come out fighting.

After many hours going through my collection, I decided this week's post would be another album from Drivin' n' Cryin' which pairs up quite nicely with the last DnC album posted all those years ago plus it's the album's 20th anniversary.

"Smoke" is the followup to "Drive Me Courageous" which sold fairly well, but I guess folks had moved on to other things by the time this album came out. Shame really, this is a really nice southern-tinged hard rock album with some acoustic numbers thrown in to keep things interesting.

So, is this Southern Rock or did I backhand b*tch slap Rjhog hard enough so that he never, ever backs me into a corner again?

Drivin' N Cryin' was pretty big around Athens back when I was in school there.  But I was never a fan.  I remember you posting an album before by them, but I don't remember much about it.  Fly Me Courageous is really the one song I remember.  It seems like they had another song that was pretty big, about walking or something.

Anyway, this immediately seems a bit heavier than what I was expecting.  Not heavy metal heavy, just heavy.   The first two tunes don't move me at all.  That third song, however, is pretty good.  And then a slowdown for track number 4.  This is pretty cool in a laid back kind of way.  Patron Lady Beautiful starts out slow too, and although it continues a slow pace, when the guitar kicks in it sounds terrific.  The guitar in this track is epic.

The rest of the album just kind of moves along like the first two tracks for me.  Overall, this is a good listen but not a purchase for me.  As much as I dig the guitar playing, I'm annoyed by the vocalist.

Thank you. And thank you for listening.

Not southern rock even if they claim Georgia as home..  Now that this has been answered definitively lets move on...

I like this, and I loved thr pace right out of the gate.  I wished they had kept it going instead of interupting it with that 4th track.  I thought it threw my listening experience off as I was in a groove and even though the geetar in track 5 was good, it didnt get me back until Whiskey Soul Woman which was a very cool yet somewhat laid back tune.  But for some reason I liked that one best!

Whats the Difference is close to Southern Rock but its more Black Crowes than anything else, but Im sticking with my original answer...

In the end the album never gets back to the promise of the first three tracks, and though nothing on here is bad, its actually quite a nice listen, but nothing that warrants purchase...

I got this when it first came out, and I thought that it was ok, but not as good as "Fly Me Courageous"...and I still think that way today. But Scott and I agree on the better tunes here...I like tracks 1, 2, and 3...but I too think "Whiskey Soul Woman" is the best track.

So anyway, I have not heard this in years, so I'm going to listen to this today, and see if I enjoy any of the other tracks, now that I'm older. Seriously, it's been probably 15 years since I last heard this.

Don't delete post number 80 Jon!! I think that is the double dose of "Picture", and I GOTTA be able to go back and hear that from time to time. Just finished listening to the old solo album from Ace Frehley, and it was great to hear that again after many years!

80 or 79? 79 is Picture, "Old Dogs, New Tricks" and it's still good to go. Basically stuff from this year is being deleted to free up space since they wanna charge a premium. If I keep my storage under the max, I don't have to pay.

It was a "double dose"...two Picture albums on one post. Please don't delete that one, if you can help it! By the way...I've been, umm....digging "Dig" by I Mother Earth since it came in. Listened to it like 4 times already. Thanks!

The Picture albums were on another site that shall not be named so those are long, long gone.

No, it's on this site. I just found it. It's actually a "special request" post that you did for me. I found it between number 80 (Soul Sirkus) and number 79, on that page. Please don't delete THAT one if you can help it!

oh yeah, I forgot about that. No, that one should be fine. It's basically everything from this year onwards will be up for about 2-2 1/2 months.