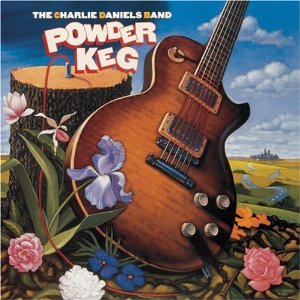 Interesting things have been happening here!

Last week Rjhog had Dixie Dregs, while I had a song from my post titled "Dregs Fall To The Wicked".

This week Rjhog has posted an album from The Henry Paul Band who was/is a member of The Outlaws which, for those not paying attention, was the band I posted last week.

WITH ABSOLUTELY NO COLLUSION AT ALL, this week my pick is from The Charlie Daniels Band. Now I'm wondering if next week we will be posting something from the same band or artist. I'm not going to ask, I'm going to let this play out. We'll just have to stay tuned!

The first time I remember hearing The Charlie Daniels Band was "The Devil Went Down To Georgia" on an AM station. I went out and bought the single and played that quite a bit, then got the album. Of course I was shocked when I found out that the AM version of TDWDTG was a "clean" version while the album featured the "dirty" version. I firmly believe listening to the "dirty" version affected my life in all the wrong ways.

So I had "Million Mile Reflection" and got the followup when "Full Moon" a few years later. I can't recall why, but for some reason I didn't like "Full Moon" and that was it for me and The Charlies Daniels Band. Was it TOO country? I don't know!

Many years later I got into a Southern Rock kick and was picking up albums left and right and picked up a greatest hits by Charlie Daniels, found I really liked the tunes. A few years later when "Million Mile Reflection" came out in  a remastered version, I picked that up. Great album, for those that have never heard it.

But there was one album that I read about that I absolutely had to have, and that was "Powder Keg", released in 1987. This album supposedly rocked, from what I read, plus a geetar on the cover made me believe that, yes, it DID rock. Of course it was OOP and prices were way to high.

So, does it rock? Yep, it does but there's also some gospel, honky tonky and regular ole country, just what you would expect from The Charlie Daniels Band. Plus, for all you country fans out there, some guy named Ricky Scaggs does harmony vocals on "Juanita".

By the way, "I don't think Jon owns any other Southern Rock other than The Outlaws" is kind of a silly statement, isn't it?

Availability: OOP (still?) but a used copy will set you back around $8.50.

But you dont own any other Souther Rock than The Outlaws (with or without the definite article)  !!!!  Wait a minte...  You gave RJ his post and he gave you yours...  Now it makes sense...

This is actually pretty good.  For the his style, his genre, and his fans, Charlie probably hit this one out of the park.  But a fan his I am not. That means a couple of things to me.  1)  He has some cool tunes like TDWDTG and Long Haired Couytnry Boy and that Swamp song from that follow up album you didnt like. and 2) Theres some winners on here like Dance WIth Me.

Also some serious cool geetar work, very melodic and very honky tonk in places - the latter of which I dont like.  So theres the rub, its the style ... its just not for me or my collection, but a cool listening experience none-the-less.

I think this is pretty good too.  But it rarely sounds like Southern Rock to me.  Many other influences here like 60's soul and such.  The guitar is nice throughout.  The only song that I didn't like at all was "What She Do To Me".  That song is terrible.  Everything else is good.  Probably the best song for me was "Bottom Line".

This was an interesting listen.   Good pick this week.