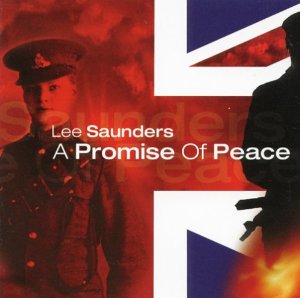 This week's pick is the 2000 album from Lee Saunders, "A Promise Of Peace".

Who is Lee Saunders? Well, let's go to allmusic.com and grab their extensive biography:

"British-born Lee Saunders founded the group Crystal Void. That band also was known as the Void. He worked with that band until 2000 when he became a solo artist, releasing the album "A Promise Of Peace"."

Yep, that's all they wrote.

"Lee Saunders was born in Hammersmith, London, England. He studied music and visual art at Brighton University and was the founder member of the infamous band 'Crystal Void', later known as 'The Void'.

Crystal Music International was created to deal with the administration of the band, and Lee's music which had also moved into the areas of Tv and films.

The band reached cult status, selling out every show and earning an exceptional reputation for their laser and light shows, special effects and multimedia presentations.

The Void shows were expanding all the time, and selling out 2000 seat venues, being unsigned, was unheard of at the time. The band were consistently hailed in the national press as 'exceptional,' 'Truly a sight to behold' and 'a gift to the record companies'. Without a record contract and having been banned from venues across the south of England due to their outrageous laser and light show, 'The Void' disbanded. It was at this point that Lee's career moved into his current position of being a solo artist.

The solo project gained the working title of 'The Puzzle', and the project objective was to use music and visual media to focus on pivotol events of the 20th century.

Lee's debut solo album, and the first piece of 'The Puzzle', was "A Promise Of Peace". The 'Promise Of Peace' project focused on the events of World War II. The album was very warmly received around the world, as its general theme and music appeals to all people.

The next piece of 'The Puzzle' looks at another pivotol point of the 20th century, the Space Race.

The Puzzle project continues to expand into other mediums, and future projects are being lined up to continue this fascinating and highly original project."

I basically stumbled across this album while checking out a third-party's store on amazon, and a few reviews compared this to Pink Floyd's "The Wall"/"The Final Cut" as well as Roger Water's solo output. One of the reviews also states that Lee was unfamiliar with Pink Floyd and solo Roger Waters which is a bit shocking as well as kinda weird since this album fits in perfectly with the above-named Pink Floyd albums. At some points he also sounds like Fish.

If you click HERE, you can read about each track and also read more reviews about the album as well as other goodies.

A very good album for those that like Pink Floyd & Roger Waters!

A Promise Of Peace

Availability: Less than $10 new or used.

by the way, I don't believe anyone under the age of 60 has never heard of Pink Floyd.

So, let me get this straight...  this British guy is in the music biz, has done enough to earn "Outrageous Laser Light show" status before he even made an album, and all the time he's surrounding himself with people in the music business, band members, sound engineers, stage designers, tour managers etc...  then writes an album that sounds like a knock off of Pink Floyd/Roger Waters presumably with people who know the music biz, producers, mixers, studio musicians etc etc...  AND NO ONE EVER MENTIONED PINK FLOYD?

um, ok...  And now for something more realistic... - Your right, but more Waters solo like than Floyd, right down to the background singers (who've probably never heard of Floyd or Waters either)

- This isn't terrible, but much like a Waters solo album it lulls and then has moments, Soldier on Tom is exactly that, one big lull with too few cool moments

- I still don't buy the whole never hear of Floyd thing, its simply impossible to listen to this and not hear it (Not Just a Phoney War is pure plagiarism)

- I know you like The Final Cut, but its tough to sit all the way through for me and this is feeling much like that

- Alone in the Dark is interesting in a good way

- Hows this "plagiarism of Waters/Floyd and claiming ignorance" thing working out for him nowadays?

- Drum machines toward the latter half, he should go back to ripping off Floyd at least he's more interesting when he does

- Well, I'll give this this...  Its a good listen, but I already own a bunch of Floyd and RADIO KAOS which is all the solo Waters I can handle.  Even in the lulls, of which there are many, I didn't lose total interest or fall asleep as I would have listening to Tull.

Far be it for me to accuse him of anything but being honest...

I just don't get it. I'm flummoxed.

Okay, so I've checked out his website.  It seems that this is the only album he's done so far.  Which is a cryin' shame because this is good stuff.

It is Floyd"ish" in places.  A lot of places, from the geetar to the female backing vocals.  The subject is a fantastic one.  That war still holds interest and fascination for me.  There isn't a lot of single material here, but that's not surprising for a concept album.  I'd say Reap The Whirlwind is the closest thing to a single.  But top to bottom, this is a very nice listening experience.  It's so long that I'd prefer it to have been broken down into two discs, but that's just me.

The guitar work is just phenomenal in places, like the track Overlord.  But where is the follow up?  I'd love to hear it.  This CD is only $6.40 on Amazon.  It now resides in the Wish List of one RJ.   Outstanding post Jonny.

Permalink Reply by Scott on April 15, 2014 at 2:18pm
So do you think this guy has truly never heard of Pink Floyd and/or Roger Waters?

I would think so.