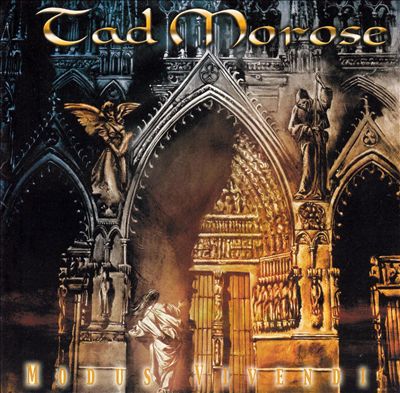 A couple days ago I went to Wal Mart to pick up something and to check out the Halloween candy selection. I figured that since it was close to Halloween, candy would be cheaper because there was no way in hell I was going to pay full price for the local spawn.

As to be expected, all the Halloween candy was gone and in its place were Christmas gift baskets, one featuring barbecue sauce from Larry The Cable Guy. I figured they had moved the candy to a different part of the store but I was too lazy and depressed to look. I guess you could say I was morose.

But I wasn't 100% morose. No, it was just a hint of moroseness. You could say that I was a tad morose.

Therefore, it should come as a shock to no one that this week's anniversary pick is from Tad Morose, 2004's "Modus Vivendi". But you should still be amazed how my mind works.

"The Swedish heavy metal band Tad Morose was originally formed in 1991, and although numerous members have passed through their ranks over the years, the only constant member has been founding guitarist Christer "Krunt" Andersson. Starting off as a vocal/guitar/bass/drum quartet, the band added a keyboardist to the lineup by 1993, the same year Tad Morose recorded their first demo tape (inking a recording deal with Black Mark Production shortly thereafter). The quintet's debut full-length, Leaving the Past Behind, immediately followed, which was described by many as a combination of Metallica and Dream Theater. 1995 saw the release of the group's sophomore effort, Sender of Thoughts, which was followed up the same year with a five-track live mini-album, Paradigma, produced by renowned metal vet Mike Wead (Mercyful Fate, Memento Mori). The group faced a period of uncertainty when singer Kristian Andrèn decided to leave the band, but the group's worries didn't last long, as they found a suitable replacement with a chap who goes by the name of Urban Breed. Further releases followed, including 1997's A Mended Rhyme and 2001's Undead (the latter of which was Tad Morose's first release for the Century Media label)."

What does allmusic.com think about this album?

"Following a series of very progressive albums in the Dream Theater template, and a deafening four-year silence (or break-up, depending on who you ask), Sweden's Tad Morose are now well into their second incarnation as a more traditionally-minded heavy metal band. And you know what? This change in musical direction suits them really well -- perhaps better than their original, over-extended vision. In fact, the revamped quintet's third, post-renewal effort (and sixth overall), 2003's Modus Vivendi, is arguably their most consistent yet. Mostly trafficking in mid-paced power chords and carefully set melodic nuances, standout songs like "Anubis," "Afraid to Die," and "When the Spirit Rules the World" are so metal, it's difficult to describe them in a more detailed fashion. But just when you think the band might be slipping into a time-signature rut, they wheel out two notable change-ups in quick succession: first the thrasher "Clearly Insane," and then the quasi-power ballad "Cyberdome." "Take on the World" threatens a descent into Judas Priest-inspired cheese-metal anthemy (anthem, + infamy, get it?), but its driving riff, and singer Urban Breed's (no joke, that's his handle) reliably stellar performance ensure that it's a classy, top-notch headbanger instead. Not so the ensuing, enigmatically named, but really rather boring "Mother Shipton's Words," which instantly devolves into a more predictable thrash-out -- and pretty much stays there. Thankfully, this is the exception, not the rule, as subsequent winners like the mini-epic "Life in a Lonely Grave" successfully reactivate the band's impressive winning streak through to the end."

What do I think of the album?

It starts off with a killer opening track and doesn't let up. Heavy geetar™ throughout and Urban Breed has a nice "metal" voice. I also quite like the background vocals, they give the songs an epic feel. Some power metal bands have the tendency to sound the same, but Tad Morose sounds different, at least to me. Never bored am I.

Listening a second time through now, and this is some pretty good hard rocking. Vocals, guitars, drums, production...the whole package. Good stuff for my personal taste.

Wow!  With song titles like that feeling a "Tad Morose" after listening to this would be optimistic!  I don't think it took more than 3 seconds into the first track to know what I was in for and then maybe another 1 second to have my opinion formed.

Turns out a)  I was right for the most part, and b) there are moments of melodic goodness - Take On The World for example.  But alas, this is that crunchy down-tuned metal that just doesn't have any place in my collection.  The album closes out with the best two tracks here - first the highly upbeat Life In A Lonely Grave followed by the down right feel good tune of the day - When The Sprit Rules The World - what makes them the best isn't their optimism and positive outlook on life, but the melodic song structure and nice guitar work

I must say nice post because it fits the season and it was more better than I thought!  (Yes I said more better)

This was a fairly bland listen.  And by bland I just mean second song, same as the first song kind of thing.  The guitars were good and the vocals were very decent.  For me, the best thing about this is the band name.  That's quite cool.  Now, all of that being said, I really enjoyed listening to this this morning.  It was a very good way to start out a Monday morning at work.

I remember seeing this in catalogs long ago. What label was it on? Nuclear Blast? Centruy Media?

Just listened to this again, and I dig it.

The lead singer's voice reminds me of the guy from Wolf at times. Do you hear the similarity, Jon?

The singer for Wolf sings in a slightly higher pitch, but they do sound similar. However, the since for Tad Morose has a better name: Urban breed.