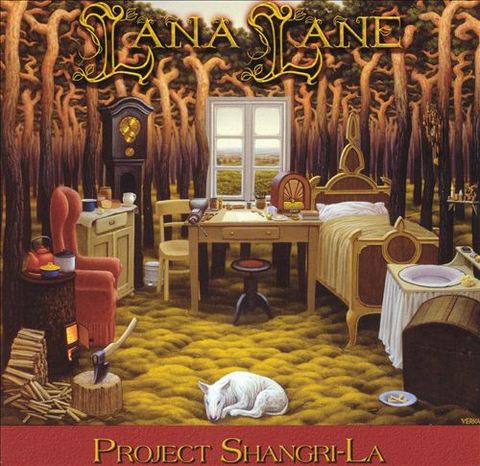 The 236th L/F album post continues featuring the same theme that started five weeks ago with the 2002 release from Lana Lane, "Project Shangri-La".

Those that are familiar with Ayreon might recognize her from the "Universal Migrator" series or you just might know her from one of the many other albums she's released. Maybe you're not familiar with her at all. Until now.

Here's a little bio from allmusic.com:

"Born in Concord, CA, Lana Lane is both a solo artist and a guest on projects by quite a few other musicians. She works closely with husband Erik Norlander on many of his projects. Lane's main instrument is her remarkable voice, but she also plays guitar. Aside from her solo work and work on Norlander's album, she has appeared on albums by such artists as Ambeon, Ayreon, and Rocket Scientists (Norlander's band). She first began her solo career in 1995 with Love Is an Illusion. The following year she released its successor, Curious Goods. 1998 would prove to be the next year that the world would see releases from Lana Lane, and it would be a virtual avalanche of music. The discs that came from her that year were Garden of the Moon, Echoes From the Garden (which was an EP of material from Garden of the Moon), Live in Japan, Ballad Collection (a compilation), and a remixed version of Love Is an Illusion (including three songs not on the original release). The following year saw two new releases: Queen of the Ocean, and, in keeping with the pattern begun by Echoes From the Garden, Echoes From the Ocean (an EP culled from Queen of the Ocean). The compilation The Best of Lana Lane was released in 1999. Several releases came in 2000. The first was Secrets of Astrology. The other two albums for that year were both compilations. The first was Ballad Collection II. The other was Ballad Collection Special Edition (a two-CD set including both ballad collection albums in one set). 2001 saw another Love Is Illusion reissue, this time a special edition. Project Shangri-La, was released by Lane early in 2002."

And here's a review from allmusic.com:

"Lane writes in her notes that she and husband Erik Norlander were just beginning to work on this album when the tragedy of September 11th, 2001 occurred. She writes of the difficulties involved with beginning work in the midst of all that. In fact, the album is dedicated to "The Memory Of All We Lost On September 11, 2001". The disc they have produced here seems not to have suffered from the difficult times surrounding its conception. In fact, it seems to do a great job of both continuing her musical legacy, that of a considerably accessible progressive rock style that leans towards prog metal at times. It really does feel like one of the best of her career and includes some stunning moments. The early parts of the album lack a little, but as it carries on, it finds a sound that is more compelling and inspired than we have heard from her before. Lane's voice is stunning as always, and this is arguably her best work."

Okay, never mind. It appeared as though it was last year

Man, this lady has a beautiful voice.

Before You Go is a great song.

This is sort of prog-pop, the pop part mostly because of her voice.

At this point, I really just stopped taking notes and listened.

It's all terrific until the male voice on the next to last track.

Jon, you surprised me bro, this was a great pick.  Her voice rivals The Duchess for me.

Well with her voice we can rule out the Celtic Women comparison!  No ones more grateful for that than me...

This is trending in the right direction.  The geetars are nice, the riffs of good quality and her vocals are way better than the average rock and roll female singer.  Its rough to be a female lead in rock and roll.  Who can name the 5 best?  Start with Ann Wilson and then go from there...

There is still a Renaissance rock feel about this, a Blackmores Night if you will.  Maybe since I just finished listening to RJ's post of Black Star Riders I'm a bit sensitive to it, but its clear there is a mid-evil aspect to her music.

Ebbtide is really quite nice, and the best track on here, showcases her voice perfectly.  Nice post and nice work my friend.  Not a purchase for me but a nice post with the right number of tracks indeed!