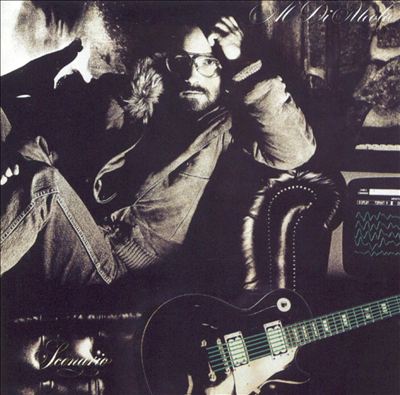 Way back in '83, I was talking about music with someone and they told me I needed to check out Al Di Meola. He mentioned something along the lines of Di Meola being one of, if not the, fastest guitarist alive. This intrigued me, so I went to a store and picked up this week's featured album on cassette. This same guy also told me to check out Raven which is a bit amusing since Al Di Meola and Raven are as different from each other as possible.

"Scenario" was released in 1983 and it sounds like something from the 80's. Some might not like it, will say it's just "background music", but there's stellar guitar work throughout. The best thing about this album is that it opened a door for me and I eventually picked up early albums which are quite different from this. The quick guitar is more pronounced on the earlier recordings, but it's not shredding. It might be very fast, but you can hear each not. They also don't have that 80's feel like this album, but I still like this album but not as much as his earlier work.

Time for the bio and (kind of unflattering) review from allmusic.com:

"Guitarist Al di Meola first rose to prominence as a blazing jazz fusion player before his playing matured and he began to conquer other styles, such as acoustic Latin music. Born on July 22, 1954, in Jersey City, NJ, di Meola briefly studied at the Berklee School of Music in Boston during the early '70s before accepting a job replacing guitarist Bill Connors in fusion trailblazers Return to Forever (a group that included such monster instrumentalists as keyboardist Chick Corea and bassist Stanley Clarke) in 1974. It was with di Meola that Return to Forever enjoyed their greatest commercial success, as such releases as 1974's Where Have I Known Before, 1975's No Mystery, and 1976's Romantic Warrior cracked the U.S. Top 40 before di Meola jumped ship to launch a solo career.

What followed remains some of the finest jazz fusion guitar-based recordings ever: 1976's Land of the Midnight Sun, 1977's Elegant Gypsy (which would eventually earn gold certification in the U.S.), and Casino, plus 1979's Splendido Hotel. di Meola then united with fellow guitar greats John McLaughlin and Paco de Lucía for 1980's Friday Night in San Francisco. Throughout the '80s and '90s, he racked up numerous accolades (including earning yearly top honors in Guitar Player magazine polls), kept on issuing solo releases on a regular basis, and played with others, including releases by Stomu Yamash'ta, Paul Simon, Stanley Jordan, and David Matthews, as well as further work with such former bandmates as Corea, Clarke, de Lucía, and McLaughlin.

During the '90s, di Meola turned his back almost entirely on fusion to concentrate more on acoustic-based world music, as evidenced by such releases as World Sinfonia, Di Meola Plays Piazzolla, and Heart of the Immigrants, among others. During the 2000s, di Meola continued this eclectic approach with releases like 2003's Revisited, 2006's Consequence of Chaos, 2007's Diabolic Inventions and Seduction for Solo Guitar, Vol. 1: Music of Astor Piazzolla, and 2008's live album He and Carmen with flutist Eszter Horgas. In 2011, di Meola delivered the Latin and world music-infused studio album Pursuit of Radical Rhapsody, featuring bassist Charlie Haden and Cuban pianist Gonzalo Rubalcaba."

"With this recording, Al di Meola thankfully left behind the pop-fusion sound that he had perfected with Jan Hammer. This was his first venture using the Roland guitar synthesizer and a drum machine. The technology used on this recording sounds dated, but the intent seems genuine. Jan Hammer's Miami Vice sound can be heard throughout, especially on "Sequencer"; di Meola places more emphasis on composition and production than on his famous technique. This turns out to be a refreshing change, but it would have been nice to hear him jam with Phil Collins on "Island Dreamer" rather than lying back on what turns out to be a disappointing collaboration. "Calliope" finds di Meola aligned with Bill Bruford and Tony Levin, although this too turns out to be a disappointment. Certainly a turning point in di Meola's career, but hardly at the level of his later output."

Availability: OOP, a used copy runs around $15 while a new copy costs around $85.

Im gonna go out on a limb here and say that your series is related to instrumental guitarists...

Part 3 is definitely the least interesting of all the parts to this point.

This actually felt like a 40 minute boat chase with Crockett and Tubbs.   Well, maybe not 40 minutes, but definitely a couple of the songs.  What got me is that this never felt like a guitar player's album.  That's not to say there wasn't any nice playing, but all I really got out of it was a bunch of synth work.  If it would have been a mystery album, my guess would have been Jan Hammer.

Maybe its not a series about geetarists, but multi-instrumentalists....  Going out on a limb here but nothing except last weeks was 100% guitar related...

This is definitely background music.  I can think of no reason an artist would record and release this with the goal being commercial success, the only thing I can think of is a release for background/documentary/soundtrack purposes.  Something to have available in a library ion other words and no other reason...  Of course I could be missing some weird part of the world where this music is popular, but I cant imagine where that would be.

Nothing really striking about any track here...  When you look up "Background music" in the dictionary there's a picture of this and Kenny G....