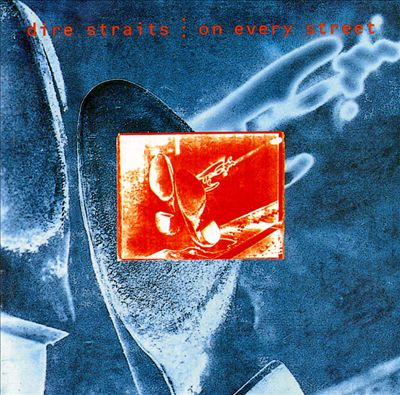 The second album in the series I thought up all by myself is 1991's "On Every Street" from Dire Straits.

This is the followup to the massively popular "Brothers In Arms", released in 1985,  which sold billions and billions worldwide and was certified 9x Platinum in the US.

Maybe it was the long wait between albums. Maybe a lot of people got sick and tired of "Money For Nothing". Maybe the music climate was changing. Maybe something else was going on. Maybe I don't know what I'm talking about regarding anything.

But, what I can say is that this album didn't come close to selling as selling as many copies as the previous album. It did reach #1 in a lot of countries and peaked at #12 on the US charts, with a measly platinum status reached.

This was Dire Straits' final album and the band broke up in the mid-90's.

Personally, I like this album better than BIA, probably because it didn't get overplayed. If I were to rank the DS albums, this would be fourth. Quite a few gems on this album and it's a swell listen.

So, what does allmusic.com think about this here album?

It took Mark Knopfler more than six years to craft a follow-up to Dire Straits' international chart-topper, Brothers in Arms, but although On Every Street sold in the expected multi-millions worldwide on the back of the band's renown and a year-long tour, it was a disappointment. Knopfler remained a gifted guitar player with tastes in folk ("Iron Hand"), blues ("Fade to Black"), and rockabilly ("The Bug"), among other styles, but much of the album was low-key to the point of being background music. The group had long since dwindled to original members Knopfler and bassist John Illsley, plus a collection of semi-permanent sidemen who provided support but no real musical chemistry. This was not the comeback it should have been.

Loves me some Dire Straits!  I feel a favorable review comin' on!

Totally with you on the overplayed thing.  I think that's what make albums that precede and follow mega-albums so much more interesting.  So is the case with this - is it more mellow?  yes.  Still its no Making Movies...  But so what, its Dire Straits!

AllMusic does have a point about the backing band.  I would love it if the band from the first two albums came back together and put an album of new material together.  But alas, this is one of those bands that we will have to be happy for what we have.  And I am...

In short summary, this is laid back, has amazing guitar work and is totally moody in a terrific way.  I really wanted to listen to this Sunday, but I didn't get the chance.  Too bad, because it is great Sunday afternoon music.  This is now on the radar.  I added every Dire Straits album that I don't already own on CD to my Amazon Wish List today.  Funny, this is the most expensive one of them all, but only about 12 bucks.

Lastly, I think this is a better blockbuster follow-up than last week's choice.  Just sayin'.

WICTY is an original song, maybe you heard the John Anderson version. Wouldn't know since it's (GAK) country.

Mark has learnt all the essential lessons from the early Peter Green and JJ Cale, and fingerpicking. The result thouhg is a unique sound, again. This tells you how it is possible to absorb a lot and filter it, and bring it out in a new sublime form, a new voice....