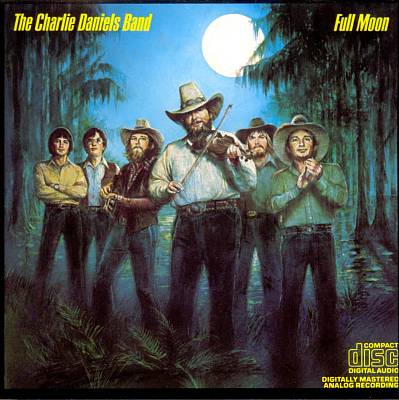 The fifth album in the series I thought up all by myself is 1980's "Full Moon" from The Charlie Daniels Band and it also happens to be an anniversary album!

This week proved to be a bit of a tough pick since it was an anniversary selection as well as needing to fit into this latest, glorious series. I did have an album all ready to go by a very well-known band, but just wasn't feeling it. I actually had to take some valuable time and pull albums, check the release date and then check on how many were sold compared to the previous release.

Luckily, "Full Moon" gave me that happy feeling and that's what we have. This follows the triple platinum "Million Mile Reflections" which was home to the top ten "The Devil Went Down To Georgia", a song most everyone should know. Of course you might only know the "son of a gun" version instead of the "son of a bitch" recording, but that's your fault.

"Full Moon" was released a year after "Million Mile Reflections" and it kind of fits in with the same pattern as that album, from the album cover to the songs. This album reached #11 on the charts and it is certified platinum which isn't bad, but it's not 3X platinum. Still, it's a worthy followup.

Even though this did reach #5 on the US country chart, it is more rock than country. For those that like country rock, I recommend that you check out other CDB albums like "Fire On The Mountain", "Nightrider", "High Lonesome" and "Midnight Wind". Good country rockin' times, they are!

Hey, finally a decent allmusic.com review for an album in this series:

1980's FULL MOON is probably the most polished and commercial album the Charlie Daniels Band made, in an apparent attempt to follow up the unexpected crossover success of MILLION MILE REFLECTIONS and its hit single "The Devil Went Down to Georgia." "Legend of Wooley Swamp" is almost an exact rewrite of that song, in fact.

While nothing here became as inescapable as "Devil," its slickly commercial sound struck a chord with the faux-country URBAN COWBOY crowd. "Lonesome Boy from Dixie," a rocker about a Civil War soldier, is a highlight, as is the bluesy "No Potion for the Pain" and the tender "Carolina (I Remember You)." The sentiments of the ultra-patriotic "In America" garnered a minor hit sure to be played on country radio stations around the Fourth of July every year.

Availability: The single disc version is OOP but available for around $16 or you can get the Epic Trilogy, Volume Two which contains "Midnight Wind", Million Mile Reflections" and "Full Moon" for around $11 used.

Time to throw out a compliment.  You do a fantastic job with this feature.  I can probably count on 1 hand then number of albums that have been posted by you that I had heard before you posted that particular album.  And that's in five plus years here at CRB and quite a few albums on that other site that shall continue for all time to be unnamed.  Great job, now think of something jerky to say...

Oh yeah, looking forward to checking this out.

I almost posted "Edge Of The Century" by Styx but figured everyone would own that album because it was Styx. And now you know.

Thanks to Mr. Gowan, 2005's "Big Bang Theory" was the highest charting Styx album since "Kilroy Was Here".

This is the album that came after that one album that had that one song about the devil in Georgia.  RJ - did you know he lived near you?

I remember The Legend of Wooley Swamp, it hit the charts and the radio pretty hot and heavy at the time of release.  Not sure it lasted long, but the crowd I hung around got into it.  So the song is just as familiar to me as that one song that preceded this song yet came from the album that came before this album which sold more than the album that came after that album - or something like that...

Now, its the rest of the album that's a total unknown to me.  But how can you go wrong with a song about Carolina?  You cant!  That's the answer, there's nothing bad about anything to do with Carolina.  Lonesome Boy From Dixie is exactly as I would expect from Charlie, a good 'ol southern jam session.  Love the keyboard work.  Vocally he's not the strongest, but he can write a catchy tune, but then again when your subject matter includes Carolina and Dixie, its a win-win!

No Potion for the Pain is nice little blues tune, but it was just OK.  El Tore, uh, who ever...  I liked the rhythm geetar had a nice southern feel to it, not so sure he needed to included the Latino horn section in the mix, didn't seem to work.  But realistically, these probably could've used a little of that Carolina magic to make them better.

Now the South Sea tune, and by regional association has that Carolina influence, and thus is automatically pretty cool! So what if it's a bit of lounge music , the bass line is jazzy and interesting, the beat is engaging. Musically this is actually a pretty interesting number.  Kind of like this one!

Dance Gypsy Dance, here we've arrived at another Devil went to Georgia to live near RJ knock-off tune.  I suppose the record label demanded something similar, and why not milk it!

Money reminds me that he can rock it up a bit, and I think if memory serves me correctly (and it usually does) he's did a bit of rockin' in his younger days.  This tunes not bad, love the slide geetar work, could've emphasized that more since the chorus and vocals don't carry the tune.

In America - OK I lied the rest of album is unknown except this last tune as I have heard this one on the radio, but in my defense it didn't stay on the radio long.

You could keep this up for a long while and I wouldn't mind a bit!

Since you like it so much, I'm going to end it with this album.

The staff at Hidden Treasure would like to announce that January is now officially Foo Goo Fighter Dolls month!

The above post is worthless without a mic drop.

The staff at Hidden Treasure would like to announce that January is now officially Foo Goo Fighter Dolls month!

I think he's moved to Michigan.

Wow!  This brought back a flood of memories.  Not because I've heard it in it's entirety before (or maybe I have and didn't realize it.  There is a possibility that my cousin had this album, I just can't remember).  The Legend Of Wooley Swamp is so freakin' good.  I remember it getting a ton of airplay.  And we just loved it. Same with In America.  This song was really popular around this area, made more so by the problems we were having at the time with Iran.

The deeper album cuts are pretty good too.  And some surprising styles from Charlie and the boys.  El Toreador has a Mexican feel, which it should, based on the title.  And South Sea Song is almost straight up jazz with a Love Boat feel. Amazing, I had no idea Charlie had this in him.  No idea.

You probably would have to have been born in the deep South to fully appreciate a song like Carolina (I Remember You).  Many of those things are so true for a person born and raised here.  It reminds me mostly of the times I spent in Alabama, visiting family.  As a kid, playing Kick The Can as the late afternoon turned to night was just amazing, and that's what I think about when I hear a song like this.  Lonesome Boy From Dixie is also a song steeped in Southern culture.

One thing I didn't realize is that Charlie's not the only vocalist.  At least it sounded like at least one, if not two other vocalists present.

Sweet post.  Making a Top 5 LFAOTW list will be a breeze this year, they may all come from this series.