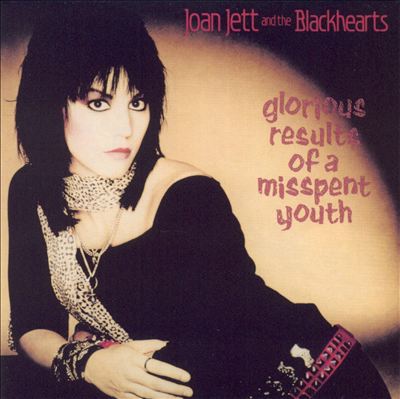 NOTE: Well, now. Seems like you can only post five tracks per player thru free Podsnack. So, the picture above has the player for the first five songs, the one at the bottom left has the next five and the one at the bottom right has the last two. Gonna have to rethink this. Oh, and each song has to be five minutes or less.......

For the eighteenth, seventh (and final) album in the series I thought up all by myself, we're featuring an album that is NOT an anniversary album. I'm such a rebel.

This week's selection is the 1984 release from Joan Jett And The Blackhearts, Glorious Results Of A Misspent Youth.  It reached #67 on the US charts and, at that time,  was the lowest charting album of her career.

GROAMY (I think I discovered a new word!) was the followup to the gold certified Album which followed the platinum certified I Love Rock 'N' Roll and has not received any certification. I believe there was a single or two released but none of them caught on which could explain why this album didn't sell as well as the previous two.

I didn't like this album when it came out and still didn't like it a few years ago. This was the last JJ album I bought until 1994's Pure And Simple, but listening to it now, I like it. Don't know why that is.

From her days with the all-girl band the Runaways through her work with her own band, Joan Jett has been a pioneer, if not an innovator. She has always paid loving tribute to the riffy rock music that she loves. On album number six, Glorious Results of a Misspent Youth, Jett, backed by her Blackhearts, churned out more of the same, but with some of the most satisfying and strongest material of her career. The album is an engaging collection that ranges from a glam-inflected update of the Runaways' classic "Cherry Bomb" to the swagger of the Gary Glitter hit "I Love You Love Me Love." Other songs include Jett's versions of "I Need Someone" and "New Orleans" and standout originals like the rocking "Frustrated," the full-tilt boogie of "Long Time," and a ballad, "Hold Me," that would sound mawkish coming from anyone else. Infectious choruses, crunchy melodies, and Jett's growling vocals make this album an excuse to turn the stereo up just a bit more.

Glorious Results Of A Misspent Youth

Availability: The version features only this album is OOP and can be had for around $20. Smart move would to pick up the Album/GWOAMY set which is remastered and included bonus tracks and can be yours for around $14 (cheaper if you have Amazon prime). 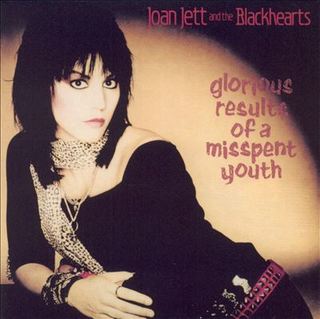 Podsnack is playing cruel games with us!!!!

I didn't have any problem just now posting NMC.  Ten songs and one of them was over five minutes...

Guess I spoke too soon.  Only 5 songs stuck.

hmmm...  we have another FileFactory issue to deal with.  Any suggestions?

I did a quick look this morning and found this and this. Didn't really look too deep into them since some got a bit technical and I didn't have time to play around.  Only problem with the second one is the date it was published, six years ago is a looooong time. I didn't see a date on the first one.

This one look interesting.

Not sure about that part that says "forms playlist automatically".

It takes the mp3 from the file you direct it to. However, I played around with it within the last 30 minutes and it needs PHP (whatever the hell that is) and wouldn't let me play any further.

Short video about what it is:

The Top image and the bottom left image are the same link I think since they contain the same 5 songs. And the opener, Cherry Bomb, is missing altogether.  Not sure whats going on with Podsnack...

The top one should be correct now. I think.

Isn't the first song a cover?  Anyway, I can't say I've ever been much of a fan of Joan Jett or the Blackhearts.  Their music has just never appealed to me.  The opening cover is easily the best song in the first section posted.  Well, that fifth track is pretty decent.  It has a touch of the melody from Let's Be-Bop on REO's Good Trouble Album.  That happens to be the only song on that album that I don't like.

I Need Someone belongs in the fifties...forever.  New Orleans is terrible.  Someday has a very cool riff.  I would never call this great (other than the riff), but it's the best song so far for sure.  The last tune is okay.  It has a short but nice guitar solo.

But really, I had trouble getting into this at all.  I'm pretty comfortable keeping my Joan Jett collection right where it is...zero.