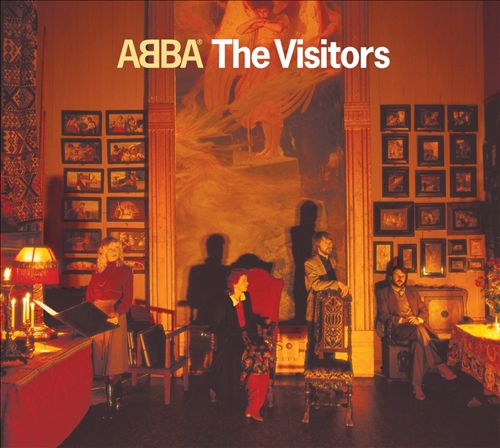 This week's selection is the thirty-eighth in the series I thought up all by myself and there are those that will make fun of this week's pick as well as the band, but that's okay. I know what quality is and some people obviously don't. Their loss, right?

The Visitors, released in 1981, turned out to be ABBA's final album even though it wasn't supposed to be (more on that below, courtesy allmusic.com). This was the first album since 1975's self-titled release that did not receive a certification in the U.S. but it did receive platinum certification in Germany and the U.K. This was also the band's lowest charting album in the U.S. since 1975 with The Visitors (only) reaching #29.

Four singles were released with "When All Is Said And Done (#27) and "The Visitors" (#63) charting in the U.S. The two other singles released were "Head Over Heels" and "One Of Us" which were both successful overseas.

Back in the 70's and 80's, I would be one of "those people" mocking ABBA. However, as the years passed I found myself admiring ABBA more and more. There's much more to their music that just the hits which aren't anything to laugh about. There's some major talent involved here and I find that quite admirable. Granted, it's not for everybody, but you just have to admire talent.

In 1982, The Visitors was the first CD manufactured at the Philips plant in Germany and is the first album to be mixed and recorded digitally.

ABBA's final album was recorded during a period of major personal shakeups, principally in the decision by Benny Andersson and Frida to follow the same route to divorce that had already been taken by Björn Ulvaeus and Agnetha Faltskog. Both male members of the group would soon remarry, but at the time, despite all of these changes in their circumstances, The Visitors was never intended as ABBA's swan song -- they were to go on recording together. That may explain why, rather than a threadbare, thrown-together feel, The Visitors is a beautifully made, very sophisticated album, filled with serious but never downbeat songs, all beautifully sung and showing off some of the bold songwriting efforts. The title track is a topical song about Soviet dissidents that also manages to be very catchy, while "I Let the Music Speak" sounds like a Broadway number (and a very good one, at that) in search of a musical to be part of, and "When All Is Said and Done" is a serious, achingly beautiful ballad with a lot to say about their personal situations -- even "Two for the Price of One," a lighthearted song sung by Björn Ulvaeus about answering a personal advertisement, offered several catchy hooks and beautiful backup singing. "Like an Angel Passing Through My Room" ended the original album on a hauntingly ethereal note, but not as any kind of larger statement about the quartet's fate. The intention was to keep working together, but Andersson and Ulvaeus' growing involvement with their stage project, Chess, prevented any further work together by the group beyond three songs, "The Day Before You Came," "Cassandra," and "Under Attack" -- they're all present as bonus tracks on the 2001 remastered edition (in gatefold packaging), along with the orphaned B-side "Should I Laugh or Cry" from the same sessions as The Visitors, and only add to the appeal of the original album.

1. The Visitors (Crackin' Up)
2. Head Over Heels
3. When All Is Said And Done
4. Soldiers
5. I Let The Music Speak
6. One Of Us
7. Two For The Price Of One
8. Slipping Through My Fingers
9. Like an Angel Passing Through My Room

Availability: The remastered version with four bonus tracks (not included here) starts at around $5 used. Had a chance to listen to this a little earlier today.  I have never owned anything at all by Abba.  Can't say I like 'em or dislike 'em.  At this age, it really does seem silly to not like a musical group just because it's uncool to like said musical group.  Having said that, this is not difficult to take in, but not especially memorable either.  Some of the vocal harmonies are terrific, like on When All Is Said And Done.  But other than that, I can really take it or leave it.

SOS and another song or two whose title escapes me are really my only familiarity with the group, and more than likely it will remain that way.  There maybe some people that make fun of you for posting Abba, but not me.  There's plenty of other things I'd prefer to make fun of you about.

Interesting listen, nothing here that jumps out as a familiar tune or something that I heard on radio at the time. But for me ABBA is the albums Arrival through Super Trooper and thats all I heard of them.  I think theres some good stuff that made radio interesting, Knowing Me Knowing You comes to mind first, and then of course Dancing Queen, a song I first seen and heard on the Midnight Special, I remember this because Heart debut'ed on the same show (pretty sure anyway and we all know how my memory works so no need to look it up or anything).

The ladies were clearly the most memorable not just because they were the singers but because of their weird outfits, dance moves, and unapologetically - their cuteness.

This album doesn't seem to really have a hit single, these songs have a similar feel all the way through.  Maybe the relationships in the band were worse off than they believed.  Kinda rings true since they never came back together, ever again...

This was pleasant as well, but again nothing really floats to the top for me but One of Us comes close.  I liked it enough to enjoy the album but no purchase will come from this for me...

Well, they did for three songs mentioned above. I heard something about a possible reunion, but seems odd since they will be like 90 or something.

If you ever find it, you should watch ABBA: The Movie.  It's quite fascinating.

I think I've seen pieces of it, but not the whole thing, I will indeed look it up!