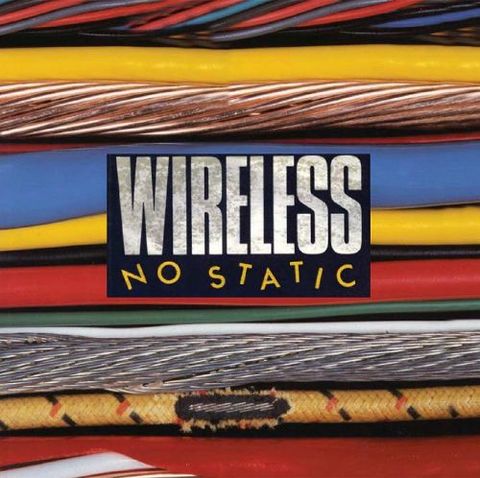 Who produced it? Leddy Gee, or something like that. Some unknown.

Hmmmm....does Amazon have something? Sure!

There's no doubt that Wireless were one of the best kept secrets in Canadian rock. An obscure Toronto, via Australia, based quartet with a neat line in quirky yet powerful hard rock, sending out a message with every turn of the screw. Prior to No Static the band had issued two warmly received if poorly selling albums leaving them to question their very existence. Indeed, all but resigned to breaking up, word reached Rush bassist/singer Geddy Lee who immediately jumped to the rescue, offering his production services if they would consider sticking together and making another album. Faced with such overwhelming enthusiasm and a label (Anthem) keen as mustard to bank roll another record, they humbly acceded to demand. No Static takes the Wireless mandate to its logical conclusion, crafting arguably the band's definitive musical statement. Geddy Lee's hands on approach documents a band very much on the attack, leading by example and ramping up the energy level on all fronts.

Availability: New or used for around $13.

Oh man!!! I’ve always heard of this elusive Leddy Gee character but never comprehended that it was a real live person! The stories are those of legends and now to find out ... well, I'm verklempt! (or however you spell that)

Well this a bit of a departure from your new norm of mmm - pop music. Legend has it that Leddy Gee was experiencing a renaissance through a new found love of Reggae, this seems to dispel that a good bit, but who can know for sure! There is very much a feel of Paul Rodgers, sort of a through-the years feel. Meaning you can hear Free, Bad Company and maybe even hints of The Firm as there are moments of New Wave in here? (That last one may be a stretch, but I’m very transparent when I type these thoughts out)

I am glad to see Geddy Lee had some involvement as well. Maybe this took him back to his rock and roll roots… Hey wait a minute! Geddy, Leddy, Gee, Lee… oh you thought you could get one over on us didn’t you! It all makes sense now… Leddy is Geddy’s alter-ego! And now the rock and roll vibe here now makes total sense.

Really good album though it wont make my purchase list!

This one is so great that I'm considering buying it. I'm giving the album a second spin and it holds up pretty good. Many of these songs have a nice appeal. East of the Sun is the most beautiful of them, but not a bad tune on this one.

I liked East of the Sun too, also the closer.

This won't be real in depth.  This album was really, really good.

All parts of it, guitar and bass, vocals.  I really like it.

The songs, while not necessarily radio friendly, are very good none-the-less.  They don't have to be radio friendly to make a good album!

I liked it enough to find it on Amazon, but what I saw was considerably more than 13 bucks (new that is).  Maybe I'll come across it at the used store.  I'll keep my eyes open.  I'd like to pop it in a CD player and take another listen.

Looks like you picked a real winner this week.  Maybe it's the pressure that you are under knowing you are preparing to cut your output by 50 per cent.