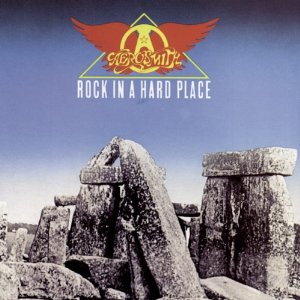 Released in 1982. "Rock In A Hard Place" is the second Aerosmith album I bought, the first being "Draw The Line".  Actually, maybe it was the third; maybe I purchased "Night In The Ruts" too. Don't remember if it's the second, third of fiftieth, but I can guarantee that I picked this up in 1982 at the PX in San Antonio, Texas. On cassette. For my Walkman.

And the reason I picked it up was because the cover was so blue. This is no joke. It grabbed my eye and I just wanted it, wanted to own the blueness of it.

I didn't care that Jimmy Crespo and Rick Dufay had replaced Joe Perry and Brad Whitford on geetar. Stuff like that happens all the time and I wasn't "in the know" about Aerosmith so it was no big deal.

And it's still no big deal to me now. I don't care if it's supposedly "missing" something, it's a good rock album. That's all I (and you) should care about. It's better than "Night In The Ruts" and it sure is better than that "comeback" album (digging my overuse of quotes?) and most of the rest of the sellout Aerosmith.

The one song that got some airplay was "Lightning Strikes" which is a totally kick ass song. Still hear it occasionally on the radio today. The only song that kinda sucks is the last song, "Push Comes To Shove", but the rest of the album is really good, and I'm even including their remake of "Cry Me A River".

One last thing...Brad Whitford did play rhythm geetar on "Lightning Strikes", so maybe that makes that song even better for the Aerosmith "purists"?

Rock In A Hard Place

MSoTW: Guess we're still working on last week's song? Last hint should give it away I would think...... 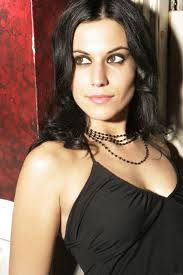 I like the new girl too!  I realize there is only so many Kylie pitures one can use on this site, so I will give you kudos on a rather nice replacement girl, even if I have no idea who she is.

I think Ive made myself perfectly clear on where I stand with Aerosmith, to me their career stops at Permanent Vacation (which I have a feeling will be posted by RJ soon).  Ive heard this album and much like you, didnt really care or know that any replacement players were used on it.

I like it though, just not enough to buy it.  Its been a long time since Ive heard it too, and your right, Lightning Strikes is a cool track.

Cassette Walkman huh!  You must've been cool back then!  Just as a matter of clarificaiton.  Remember when cassesttes were all white?  And then they started releasing cooler ones that were clear?   Ive always though the clear ones were better than the white ones, kind of like buying a CD and Remastered CD now days.  uh ... nevermind maybe its just me...

Yeah, you're right. The clear ones DID sound better than the white ones. And they were LIGHTER because they were clear!!!

Permalink Reply by Dave on September 25, 2011 at 11:38am
I enjoyed the album when it came out.  Like a lot of groups that replaced members, I don't think the public gave them a fair shake on this one...and it is just my opinion, but Brad Whitford is just as needed in Aerosmith as Joe Perry is...you should check out the Whitford St.Holmes album and you'll see what I mean.  Aersomith has turned into the Tyler-Perry show, but the band is the sum of it's parts, not just two guys.  Anyway, in my opinion, it's a great album, and "Lightning Strikes" is a great song.

Permalink Reply by Jon on September 25, 2011 at 4:11pm
A couple months ago I looked for the Whitford/St Holmes album and it's out there but for a really high price, so I'll wait for a reissue.

I have no earthly idea who the mystery artist is.  I don't even know what questions to ask for clues.  Maybe Jon will steer us in the right direction.

This is the first time I've heard Rock In A Hard Place.  There was really nothing here that stood out in the least to me.  Even Lightning Strikes was just okay.  But thanks for posting.  I would have never heard it otherwise.

Permalink Reply by Jon on September 29, 2011 at 5:11pm
Forgot about the mystery track. How about that they're from Georgia?

Permalink Reply by RJhog (Admin) on September 29, 2011 at 5:20pm
Current band?  Defunct?  Is the vocalist the regular lead vocalist or a band member that is just taking a vocal for this song?

Current band, they've put out over 10 studio albums and I am almost 100% positive the regular lead singer sings lead on this song.