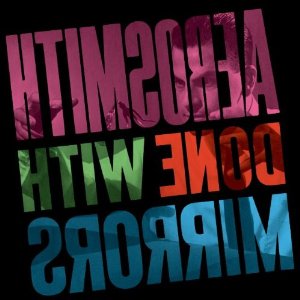 Gonna make this one quick since I'm being pressured to pack for vacation which starts tomorrow (actually now if I really think about it). ROADTRIP!

This weeks pick is.......well, judging from the picture above, it's just gotta be Aerosmith's 1985 release titled "Done With Mirrors". If you can't figure it out, hold your monitor up to a mirror. Get it??

Many years ago, a friend of mine stated that nobody's opinion could be wrong since it was an opinion. Make sense? Good!

So here's my opinion: this is the last solid Aerosmith release. Period. If you think differently, then you're wrong. See how that works? My opinion CANNOT BE WRONG!

It's the first album of the reunited Aerosmith, and it's back to the sleazy, hard rock we expect from them. No polish, no trying for a hit, just pure rock and roll. And it's the last album without any outside writers.

So go ahead and say that the followup, "Permanent Vacation" is a better album, and I'll just tell ya that, in my opinion, you're 100% wrong and that's that.

1. Let The Music Do The Talking*

Availability: Can be found for less than a buck. Wow!

This week's MSoTW is easy, might take a little bit of thinking though.

Permalink Reply by RJhog (Admin) on July 31, 2010 at 6:04am
Dang...I am still at the hospital and cannot listen, but Niels reply really makes me want to.

Permalink Reply by Scott on August 1, 2010 at 6:23pm
Done With Mirrors is a solid effort and should have been the release that brought them back as a rock and roll band, sadly it seems, (or at least its my opinion) that it's failure to do so sent the band in a different direction...

I totally disconnected from them after hearing Dude Looks Like a Lady/Permanent Vacation. I thought, and still do, that that song/album are awful and what they've done since then can be summarized as no less than pandering for an MTV audience. It's hard to believe that this is the same band that recorded Get Yours Wings, Rocks, and Toys In The Attic. But I digress...