Shawn Phillips, one of music’s most daring, influential and enigmatic figures, has an announced the release of his new album, Continuance, via Tunecore Distribution. The record – Phillips' 26th solo effort – sees the genre-bending singer-songwriter and virtuoso guitarist, who was once described by Bill Graham as “the best-kept secret in the music business,” mixing hard rock, blues, funk, jazz, classical and New Age into an enthralling, singular style of expression.

“I didn't set out to create this album for people who want some background music while they're having dinner,” says Phillips. “And it's not something to be sampled piecemeal. I wanted to make a complete experience, a record that takes you on a journey both musically and lyrically. That's all I've ever done.”

The aptly named Continuance extends Phillips' commitment to making ambitious, introspective yet socially conscious music. Just as he did on the psychedelic staple “Season of the Witch,” which he co-authored with Donovan in 1966, Phillips weaves evocative imagery with indelible melodies and progressive arrangements, resulting in music that is by turns angry and uplifting, soothing and unsettling. “I came up at a time when you tried to write songs that mattered,” Phillips states. “Lyrically and musically, you challenge yourself and your audience. I always felt an obligation to never play it safe, and I'm certainly not going to stop now.”

Phillips brought that same sense of adventure into Rose Lane Studios in Carpenteria, California, where he recorded his new songs with a group of musicians (Lady Gaga's Brockett Parsons, Keyboards; Anthony Crawford, Bass; Sebastian Persini, Drums; Danny Janklow, Saxophone; Josh Seguin, lead Guitar and Jonathan McCuen, Guitar on “C'Mon Round) he had never met before. “My co-producer, Sjoerd Koppert, recommended the players, and I put my faith in him,” Phillips explains. “I came in, told them there wasn't any music on paper, that I would not tell them what to play, played them the music, and off we went. Apart from a basic structure, It was free-form. I didn't know what to expect, but a minute into the first tune, 'Man With a Gun,' I said, 'All right. This is gonna work!'”

On that hard-edged track, the musicians explode fiercely and intuitively, and Phillips makes no apologies for the song's on-target and timely lyrics. “What's happening in the world and with this administration disgusts me,” he says. “I think we have the singular most unqualified, incompetent individual ever to grace the Oval Office right now. I grew up with guns, but to see what people are doing to sell weapons, profiting on people's pain, it appalls me. An untrained citizen doesn't need an AR-15.”

Similarly, he casts a discerning eye at the current administration and widens his net to include all of the world's oligarchs on the funky, jam-like “Furious Desperation,” which includes a soundbite from a speech by Vermont senator and 2016 presidential candidate Bernie Sanders. “The title is a reference to Ralph Waldo Emerson's 'Quiet Desperation,'” Phillips explains. “That was then, this is now. The majority of the world is trying to survive, and you have people in power who are deliberately making it difficult.”

But Phillips dials down the righteous vitriol on the absorbing and transporting opening cut “Life,” which is propelled by one of the guitarist's most elegant acoustic guitar figures. His six-string phrasing is superlative on the hypnotic instrumental “Tribute to D,” written in honor of fellow guitar icon, Pink Floyd's David Gilmour. “I met David through my friend Bob Ezrin,” Phillips recalls. “I thought he was a kind, intelligent soul. I was in South Africa when I wrote the song, and I thought the melodies sounded very Gilmour, so it’s my tribute to him.”

Several of the tracks are graced by thrilling orchestral arrangements by legendary conductor and composer Paul Buckmaster, whom Phillips worked with and called his closest friend for over five decades. These cuts represent the last works by Buckmaster, who passed away in November 2017. “I talked to Paul by Skype the day before he died,” Phillips remembers. “It's so sad that he's gone, and it's an absolute honor to have him on this record.”

In the early '60s he played a coffee house in Saskatoon Saskatchewan where a young woman who was a waitress there, asked him to teach her some guitar. He did so for some 2 weeks. Her name was Joni Mitchell. Then, while playing in Toronto, he met Ravi Shankar after attending his concert and Shankar graciously gave him his first lesson right there and then. Arriving in England in the mid-'60s, the Texas-born Phillips had a way of pulling people into his musical orbit. A master on six- and 12-string guitars, having learned sitar from Ravi Shankar and, in turn, gave George Harrison his first lessons on the instrument. Donovan called upon his songwriting services, and Paul McCartney asked him to sing backup on Sgt. Pepper's Lonely Hearts Club Band. While in England, he also recorded with Traffic members Steve Winwood and Jim Capaldi. “It's all history now,” says Phillips, “but at the time, we were just musicians hanging out and having fun. We really didn't think about the importance of what we were doing.”

In the ensuing decades, Phillips released a string of rapturously received records – his four-album run between 1970 and 1972 along contains the classics Contribution, Second Contribution, Collaboration and Faces – and has seen his work compiled on not one, but two “best of” collections. While continuing to record and tour, he's made his home in Italy and South Africa before moving to Louisville, Kentucky with his wife Juliette and 12 year old son Liam in 2016.

“More than anything, I just want to open people's minds and appeal to the better nature in everyone,” says Phillips, who cites “In Grace We Intend,” the graceful tone poem that comprises the 9th track on Continuance, as a summation of that message. “I showed the lyrics to Jay Naidoo, who was Nelson Mandela's closest advisor from the day he stepped out of prison to the end of his presidency in South Africa. He told me, 'I spent three years writing a book, and you just said it all on one page.' As an artist, you feel pretty special when you hear something like that from such an extraordinary humanist.”

Continuance can be streamed on Spotify and is available for purchase on iTunes and on Phillips' website. In June, Phillips will tour Canada and he's planning dates in the U.S. for mid-summer. 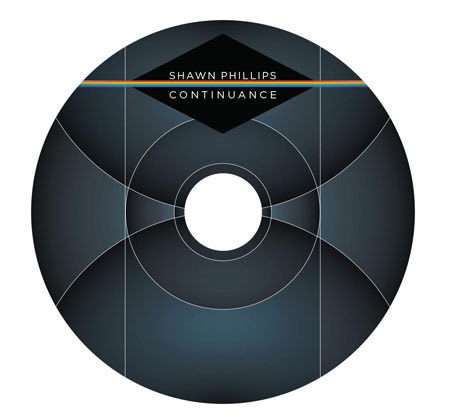