Los Angeles, CA - British progressive rock legends Flash, featuring founding members Ray Bennett & Colin Carter, will be releasing their highly anticipated new CD on Purple Pyramid Records on May 21, 2013. Titled 'Flash featuring Ray Bennett & Colin Carter', it's the first album by the group in 40 years, taking the band to a new level of creativity and virtuosity with this current set of progressive melodic rock tunes.
Founded by lead vocalist Colin Carter, original YES member, guitar legend Peter Banks, bassist Ray Bennett and drummer Mike Hough, Flash released three critically acclaimed albums in the 1970's and undertook several successful tours of the US and Europe. In the USA, the single “Small Beginnings” reached #29 in the Billboard charts, and the first album 'Flash' made the top 50, propelling the band into major venues on their first tour. In the US, Flash went from intimate venues like the Whisky A Go Go, to large concert halls like New York's Avery Fisher Hall, to the wild crowd of 300,000 music fans at the Soda Pop Festival in Indiana. Flash also made high profile performances on TV shows in Europe and the US, including 'The Midnight Special' and the Wolfman Jack hosted 'Superstars Of Rock'.
The band's new CD was recorded over a period of three years and it delivers a mixture of classic and modern progressive rock sure to please die-hard Flash fans and new listeners alike! Says Ray Bennett, “First and foremost, I think the new album turned out really well. No, that's being somewhat modest... I think it's brilliant. I wouldn't be happy with anything less. The goal for me, and I think Colin would agree, is to put an album together that's always a turn on. Not just in the beginning when you are all excited about the newness of it, but always. I realized somewhere back in time that it is possible to have that. It's really just as the old saying goes... 'a thing of beauty is a joy forever'. I think this CD is always going to shine.” Colin Carter adds, “It's left brain / right brain rock. Enough skill, detail and finesse to tease the intellect, mixed with enough raw power to send you skidding out of control across the stage on your knees and crashing into amps. Watch out for the splinters!”
Along with Ray, now on lead guitar, and Colin, on lead vocals and rhythm guitar, keyboardist Rick Daugherty has been added to the line-up giving the band's sound more warmth and depth. Mark Pardy on drums and Wayne Carver on bass make up the new rhythm section. The album includes five new songs penned by Ray and Colin, two new instrumental pieces, and a cover of NIN's 'Hurt', which the band has performed in concert. There is also a new version of the classic Flash song “Manhattan Morning” from the band's third studio album 'Out Of Our Hands'.
Ray explains, “Colin and I did write a large chunk of the old Flash material, and our sensibilities as writers haven't changed a huge amount. We still write all the time. But obviously we've developed, we're more sophisticated, and we have a few more tricks up our sleeves. I think that all shows up on the new CD. I saw a lot of magic happen on this new album. As it grew into a finished thing, all kinds of excellent stuff popped up as we let it develop. A lot to be said for giving it time.”
“Iconic prog rockers Ray Bennett and Colin Carter have achieved the impossible: they've created complex contemporary rock boasting all the sonic hallmarks of Flash's classic material. It's all here: dynamic compositions, perfect vocal intonation and kick-ass guitar work.” - Will Romano, author of 'Mountains Come Out of the Sky', a history of prog rock
In closing Ray has this to impart, “I think that with the years passing you can get new growth and new inspiration if you are willing to try new things. Colin and I are up for that. However, in our case, oddly enough, trying new things led back to Flash.”
Flash Psychosync website: http://www.psychosync.info/
Flash information: http://www.myspace.com/flashbennettcarter
Flash ReverbNation:  http://www.reverbnation.com/flashbennettcarter 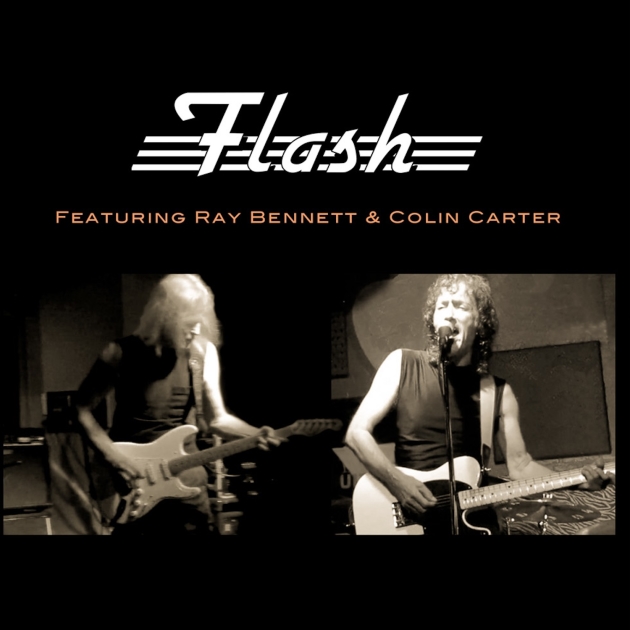 I seen that Peter Banks passed last week.  Sad news for sure...  Any chance you will be able to post some more samples or notify us when they become available?

Hey Scott, not sure if I can post any samples - although they may have some on Amazon. Yes, Peter Banks was an old friend of mine BTW, I co-authored his bio Beyond & Before - he is not on this CD release.