VIDEO'S OF THE WEEK: ARCADE FIRE 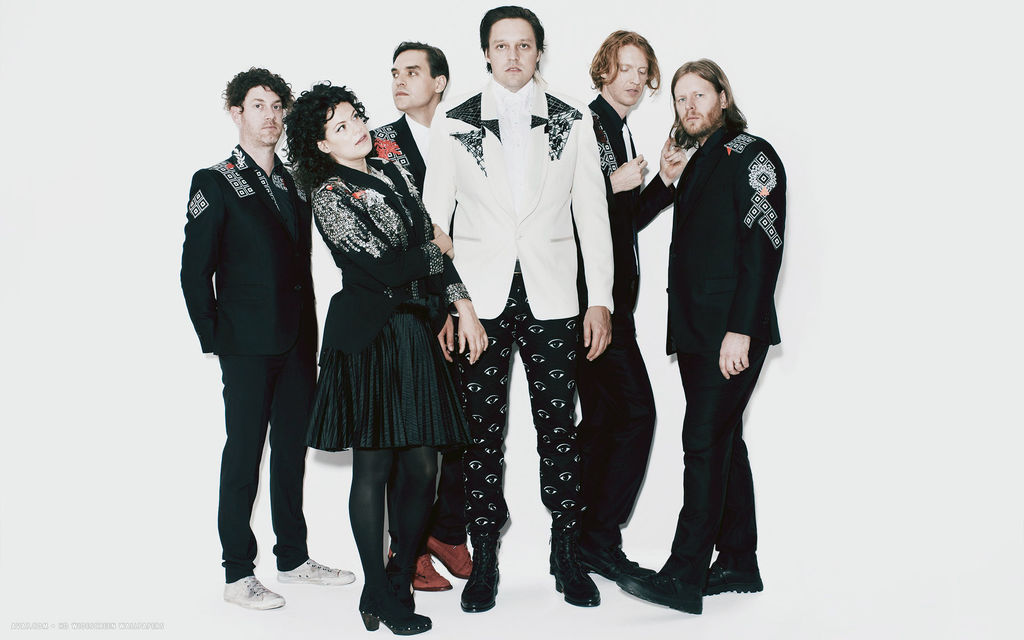 Arcade Fire is a canadian Indie-rock band (whatever that is), and they have released 4 albums so far. Not your typical Classic Rock Band, but imo, it would be boring, only listening to classic Rock all of the time (or ydrk, AOR, which I pratically never listens to any more)). I can't remember how I became aware of Arcade Fire, but in 2007, I bought their second album "Neon Bible", and liked it so much, that I also bought their debut-album from 2004, which was nearly as good. In 2010, I think, they released "The Suburbs", which ended up on my personal top 10 of the year, but I was a bit disapointed in the album, because it wasn't as good as the other two albums. The same year, I had tickets for a concert, but sadly I had to stay home because of a pain in my back. I still regret not going. Maybe it was the last time, that the band was worth seeing, because the next album released in 2013 was an even bigger dissapointment. I had high hopes for that double-album, but instead of getting heavier or whatever, they started playing Disco, Funk and stuff like that, and the songs weren't very strong imo. I haven't given completely up on them, but if the next album also dissapoints me, I will probably loose whatever interest, that is left. But since they were an important new band to me around 2007-2010, they qualify to have their own VOTW, since I'm the boss around here, so here we go:

"Rebellion (Lies)" is a song by Canadian indie rock band Arcade Fire. It was the fourth single released from the band's debut album, Funeral. The single was released in both CD and DVD formats with the song "Brazil" as the B-side. The single peaked at number 19 on the UK singles chart, the band's best performance on this chart to date. On the album Funeral, "Rebellion (Lies)" immediately follows the song "Haiti", the ending of which has the same bass beat and leads right into the beginning of "Rebellion (Lies)". The song has enduringly been the band's closing song at appearances at music festivals and at the end of most of their shows.

Neon Bible is the second studio album by the Canadian rock band Arcade Fire, released in March 2007 on Merge Records. Originally announced on December 16, 2006 through the band's website, the majority of the album was recorded at a church the band bought and renovated in Farnham, Quebec. The album is the first to feature drummer Jeremy Gara, and the first to include violinist Sarah Neufeld among the band's core line-up.Neon Bible became Arcade Fire's highest charting album at the time, debuting on the Billboard 200 at number two, selling 92,000 copies in its first week and more than 400,000 to date. Being released within a month of similarly successful releases by The Shins (Wincing the Night Away) and Modest Mouse (We Were Dead Before the Ship Even Sank), Neon Bible was cited as an example of the popularization of indie rock. Critics offered the self-produced Neon Bible mostly favorable reviews, although with division over the album's sound. Publications like NME and IGN praised the album for its grandiose nature, while Rolling Stone and Uncut said that it resulted in a distant and overblown sound.

"Intervention" is a song by Canadian indie rock band Arcade Fire. It is the third single released from the band's second full-length album, Neon Bible. The single was released to digital retailers on December 28, 2006, and was released as a 7" vinyl in the UK under Rough Trade Records on May 21, 2007. In the US, it was released on July 10, 2007, under Merge Records. The B-side of the vinyl includes a cover of another song from Neon Bible, "Ocean of Noise", performed by Calexico.Arcade Fire performed "Intervention" on Saturday Night Live on February 24, 2007. The song was covered by the operatic soprano Renée Fleming in her 2010 album Dark Hope.The song was listed at #271 on Pitchfork Media's "Top 500 songs of the 2000s".

The Suburbs is the third studio album by the Canadian indie rock band Arcade Fire, released in August 2010. Coinciding with the announcement the band released a limited edition 12-inch single containing two tracks from the album, "The Suburbs" and "Month of May". The album debuted at No. 1 on the Irish Albums Chart, the UK Albums Chart, the US Billboard 200 chart, and the Canadian Albums Chart. It won Album of the Year at the 2011 Grammy Awards, Best International Album at the 2011 BRIT Awards, Album of the Year at the 2011 Juno Awards, and the 2011 Polaris Music Prize for best Canadian album. Two weeks after winning Grammy's Album of the Year, the album jumped from No. 52 to No. 12 on the Billboard 200, the album's highest ranking since August 2010.Arcade Fire released a deluxe edition CD/DVD of The Suburbs on June 27, 2011 (everywhere except the U.S. and Canada). The American and Canadian versions were released on August 2, 2011, to coincide with the original album's anniversary. The new version included two brand new tracks recorded during The Suburbs album sessions ("Culture War" and "Speaking in Tongues" featuring David Byrne), an extended version of album track "Wasted Hours", Spike Jonze's short film, Scenes From The Suburbs, and an 80-page booklet as well as other exclusive content.

Reflektor is the fourth studio album by the Canadian indie rock band Arcade Fire. It was released on October 28, 2013 through Sonovox Records in Canada and Merge Records in the U.S. Reflektor is a double album which was recorded in multiple studios and was co-produced by LCD Soundsystem frontman James Murphy, regular Arcade Fire producer Markus Dravs, and the band themselves.Influenced by Haitian rara music, the 1959 film Black Orpheus and Soeen Kierkegaard's essay, "The Present Age", Reflektor's release was preceded by a guerrilla marketing campaign inspired by veve drawings, and the release of a limited edition single, "Reflektor", credited to the fictional band The Reflektors on September 9, 2013.Upon release, Reflektor received positive reviews from music critics and had a successful commercial performance. The album was recognized as one of The 100 Best Albums of the Decade So Far, a list published by Pitchfork in August 2014.

I've got nothing here for an intro.  This band is nothing to me at the moment. Let's see if it begins to change as I go through these videos (not all at once, don't have the time).

Lies - I don't get it.  It's not awful or crap as Niels likes to say about music that he doesn't care for, but it is quite boring. I'm very surprised you like it with that fiddle being involved.  The video is way annoying when the guy holding the camera is walking and bouncing it around.  It's almost like a trance, but not a particularly good one.

No Cars Go - I've got it now, they remind me of Classic U2.  Nah, I'm just kidding, nobody, not even current U2, reminds me of classic U2.  But seriously, they do remind me of current U2, which isn't necessarily a compliment.  And their songs are too long.  I hope they aren't all five to six minutes...

Intervention - The singer reminds me of another vocalist (not Bono), I just cannot for the life of me place who it is. I also just don't know what exactly Indie Rock is supposed to be.  The best I can do to describe what it appears to me to be is that Indie Rock is to current rock what Alternative Rock was to 80's rock.  I don't know if that's accurate or not, but it's the best I can do.  This song has a bit of a decent melody, and though I don't necessarily like it, it's probably the best of the three so far.

Ready To Start - So the band has two drummers.  And the band is a Grammy Award winner.  Props to them for that, but I still don't get it.  I'm just not hearing anything in the music that particularly appeals to me.  The only thing that strikes me here is the lyric "if I was yours...but I'm not".  That's a cool lyric.

I'll have to finish later...

Listened to the last two songs this morning.  The Suburbs was a fairly decent song.  I definitely enjoyed the video to the song.  I think the video actually kept the song interesting to me as it went along.  But Reflektor is way too long and is not as interesting, song wise or video wise.

So my final verdict is that, although they seem to have won the Grammy folks over, they haven't won me over. I don't find the music difficult to listen to, but I don't particularly like it either.  I can appreciate the bands you are posting, even if I don't enjoy them, but sooner or later, you'll probably hit on something I like. I imagine you trying to win me over is kind of like me trying to win you over...it's a tough job.

REBELLION (LIES) …  I have to admit these guys (and gal) were a bit irritating to watch in this video, probably because I just don’t get it, and I know you’ve posted them before, maybe in an NMC, but I don’t recall liking that either.  Could this be Niels-Rock?  I Kid…

NO CARS GO … I don’t believe this band does very well over here and I would be hard pressed to believe they do much better in their own country.  Maybe this is appealing in Europe?  I simply hear nothing about this band and I don’t watch music award shows or listen to popular radio so I could be wrong.  My kids are generally a good gauge of popular trends musically, and they’re not into this either.  Apparently No Songs Go either…

INTERVENTION …  The A&E Documentaries of the same name are freaky.  Just sayin’.  I’m beginning to have a hard time hearing where one song ends and the other begins.  If I didn’t have to click on them I would have blocked it out by now.

READY TO START … Ready to end.

THE SUBURDS … By far the best tune here, but that’s not saying much.

REFLEKTOR …  A disco vibe! At least theres some variation in song style finally. At 7:41 its far too long to not have some prog elements, it’s a droner…

Sorry Niels, didn’t get this one …

Back in the start of the 80's, besides of Heavy Rock, I became very fond of what apparently now is labeled "Indie Rock" or Alternative rock, which back then was bands like U2, Simple Minds, Big country, The Cure, The Alarm, New Order, The Cult (at least the "Love-album") and others I've forgotten right now. And later on Radiohead, R.E.M., Flaming Lips and....Arcade Fire among others. So I'll be proud, if you label that kind of music "Niels-rock"