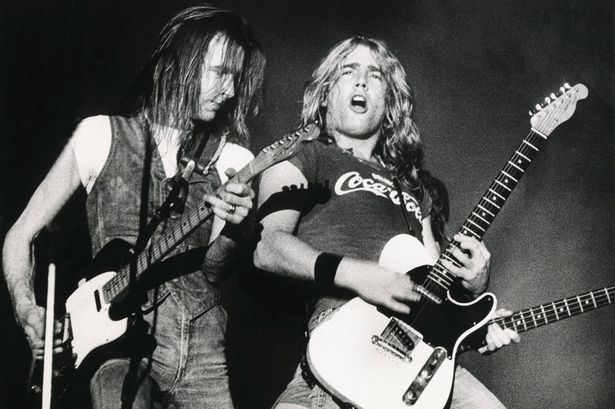 Once Status Quo was a good boogie rock-band, and they've made some fine songs especially in the 70's. Later they became a bit of a joke, if you ask me, but listen (and look) at the video's posted here, and you might agree with me. I have no idea of how known this band is/were in the US?Status Quo was formed in 1962 under the name "The Scorpions" by Francis Rossi and Alan Lancaster, along with Alan Key (drums) and Jess Jaworski (keyboards). Rossi and Lancaster played their first gig at the Samuel Jones Sports Club in Dulwich, London. In 1963, Key was replaced by John Coghlan and the band changed name to "The Spectres". They began writing their own material and after a year met Rick Parfitt who was playing with a cabaret band called The Highlights. By the end of 1965, Rossi and Parfitt, who had become close friends, made a commitment to continue working together. On 18 July 1966, The Spectres signed a five-year deal with Piccadilly Records, releasing two singles that year, "I (Who Have Nothing)" and "Hurdy Gurdy Man" (written by Alan Lancaster), and one the next year called "(We Ain't Got) Nothin' Yet" (a song originally recorded by New York psychedelic band The Blues Magoos). All three singles failed to make an impact on the charts. Parfitt joined the band in 1967.

By 1967, the group had discovered psychedelia and changed their name to Traffic, but were forced to change again (to Traffic Jam) to avoid confusion with Steve Winwood's Traffic, following an argument over who had registered the name first. The band, which at this time included organist Roy Lynes, secured an appearance on BBC Radio's Saturday Club hosted by Brian Matthew. They released another single "Almost But Not Quite There" which was also a flop. In late 1967, the band became The Status Quo and in January 1968 released the psychedelic-flavoured "Pictures of Matchstick Men". Rick Parfitt was invited to join the band just as the song hit the UK Singles Chart, reaching Number 7. "Matchstick Men" also became their only Top 40 hit single in the United States.Though the follow-up was the unsuccessful single, "Black Veils of Melancholy", they had a hit again the same year with the poppy, Marty Wilde penned "Ice in the Sun", which climbed to Number 8. Although the group's albums have been released in the United States throughout their career, they have never achieved the same level of success and fame there that they have enjoyed in their home country. After the breakthrough, the band management hired Bob Young as a roadie and tour manager. Over the years Young became one of the most important songwriting partners for Status Quo.

After two relatively poor selling albums, Ma Kelly's Greasy Spoon and Dog of Two Head in 1970 and 1971, their major breakthrough came when they signed with the heavy rock and progressive label Vertigo. Their first album for Vertigo, Piledriver, was released in 1972 and heralded an even heavier, self-produced sound. This album was essentially the stylistic template for each album they released up until Blue for You in 1976. Quo's more popular songs from this era include "Paper Plane" (no 42 in the German music chart) (1972), "Caroline" (no 36 in the German music chart).

ROLL OVER LAY DOWN

"Roll Over Lay Down" is a song that was released as the A-side of a live EP, Quo Live in 1975. It was released to celebrate the band's 13 anniversary.All of the tracks were recorded live and were taken from concerts at The Kursaal, Southend on 1 March 1975 and Trentham Gardens in Stoke the following night. The band released the EP against the advice of many people who predicted such a release would be a failure. It featured a picture sleeve that contained sleeve notes by BBC Radio 1 DJ John Peel. The centre of each copy of the record was specially moulded to feature the well known 'four heads' design (drawn by J Ifield) from the sleeve of the Quo album.All three tracks were included as bonus tracks on the re-release of the On the Level album.

Written by Francis Rossi and Bob Young, "Down Down" was Status Quo's only number one single in the UK Singles Chart to date. "Down Down" spent a week at the top of the chart in January 1975. The single was first released on 29 November 1974 on the Vertigo label, paired with the B-side song "Nightride". Both songs came from the album On The Level which had yet to be released. The album version lasts 5 minutes and 24 seconds and the single version 3 minutes and 49 seconds.Originally it was entitled "Get Down", but this was changed before release, possibly to avoid confusion with the Gilbert O'Sullivan song of the same name.

"Whatever You Want" is by Rick Parfitt and Andy Bown, it was released on the album of the same name in 1979 and has become one of the band's better-known works. It originally appeared on the band's 1979 album Whatever You Want and was later re-recorded for their 2003 album Riffs.The song commences with a quiet introduction, containing a guitar playing notes from chords. Besides "Pictures Of Matchstick Men", this is one of my favorite SQ-songs. I clearly remember this one from the spring of 1980. I love the intro and the riff.

I don't think they are known very well at all here in the United States.  I've heard of them, probably have even heard a song or two, but can't say I've ever heard anything that has made me think that I need to explore their work.  Let's check out these five tracks and videos and see if my mind is changed...make that six tracks.

Pictures - This song and video are definitely steeped in the sixties.  I don't think it's bad at all, but I can't make up my mind if that riff is cool or aggravating.

Paper Plane - Wow, you can definitely hear a huge difference from that first song.  This song is much more rocking with a Chuck Berry type solo.  And I think the vocals are quite cool.  I like this one.  I can see where a song like this might have influenced a band like Cheap Trick.

Caroline - This one is a bit more cheesy, can't say I really care for it.

Roll Over - I immediately don't like the video.  The editing and splicing together make me wanna throw up.  Way too fast.  I'm not feeling the song, but the solo is pretty cool. But I can't watch this video, it really is making me seasick or something.

Down Down - Good grief...what's wrong with these cameramen?  This one's making my head spin too.  This video stinks. The spinning part.  The song is a bit better than the last two, but no where near as good as Paper Plane.

Whatever You Want - The intro is definitely cool.  A much better start for this song.  Riff is okay.  I'd say it's the second best song here.  The band's vocals are quite good at times.

So, did this change my mind?  Not really.  I don't think I'm missing much by not having any Status Quo in my collection. Still, there were definitely some bright moments (but those videos weren't too great).  Here's my song ranking:

I searched this site for this band since the guitarist passed away and found this.  When I seen the date it was posted I knew why I missed it...  Thats the week my son got married, we were a bit busy around here.

I really want to like this band because of these latest events, but I found them repetitive.  The riffs are reused in almost every song so after a few tracks it just felt like the same song over and over.  No slight on them though, they made the formula work and that's cool because they got to live the life the rock and life.

I see, that "Pictures Of Matchstik Men" is "out of order". That song is by far my favorite, with Whatever You Want on a second place, mainly because of a very good intro. Otherwise, I'm no fan at all. Still another sad loss. I'm afraid it'll only get worse the next couple of years.