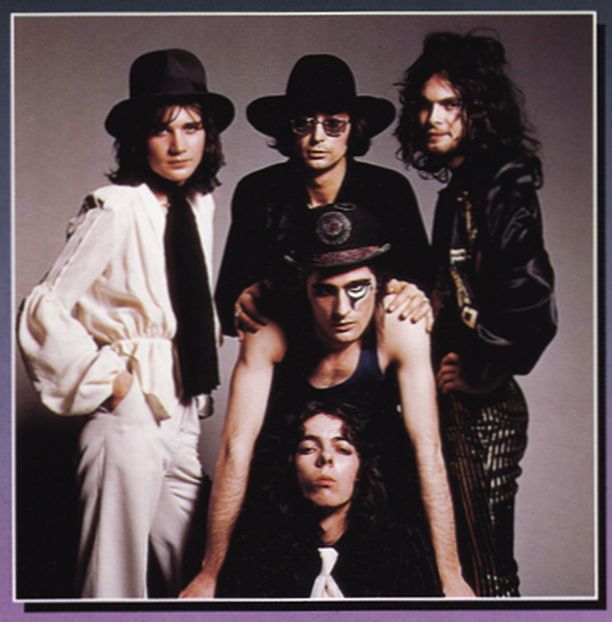 I've got a feeling, that this is another first for RJhog and Scott? Nevermind, this is my VOTW Steve Harley & Cockney Rebel-special. Another band, I became familiar with around 78-79. And again (probably the same) a friend introduced me to the band, by playing a double-live album "Face To Face" from 1977. As I recall it, I didn't like all the album, only a couple of the tracks, but It was the first double-live-album I ever saw/heard, that wasn't a KISS-album. Within a short while, I saw other very interesting double live-albums by Lizzy and Queen. Wait a minute, it must have been the summer of 78, that I was introduced to ST&CR, because I bought a studio-album the following spring, and that was in '79. Yeah, whatever, here's the music/videos:"Steve Harley & Cockney Rebel are an English rock band from the early 1970s. Their music covers a range of styles from pop to progressive rock. Over the years they have had five albums in the UK Albums Chart and twelve singles in the UK Singles Chart."

"Hideaway" is a song by British rock band Cockney Rebel, fronted by Steve Harley. The song was released as the opening album track on the band's debut The Human Menagerie in 1973. In 1974 it was released in Denmark as a single, apparently the only place in the world, that happend.

"Mr. Soft" is a song by British rock band Cockney Rebel, fronted by Steve Harley. The song was released as a single in 1974 from the band's second studio album The Psychomodo. It became the band's second hit single in the UK, following on from the Top 5 success of "Judy Teen". "Mr. Soft" was written by Harley and produced by Harley and Alan Parsons.

Everybody's favorite Steve Harley-song. "Make Me Smile (Come Up and See Me)" is a song by British rock band Steve Harley & Cockney Rebel, released as the lead single from the band's album The Best Years of Our Lives in 1975. Written by Harley, it reached the number one spot on the UK chart, spending nine weeks in the top 50. The song received a UK Silver certification in February 1975 and has sold around 1.5 million copies worldwide as of February 2015.More than 120 cover versions of the song have been recorded by other artists, most notably by Duran Duran and Erasure, although Harley has stated his favourite cover version is by The Wedding Present.

One of my favorite Beatles-songs, here covered by Steve Harley & Cockney Rebel. The most successful UK cover of this song, and it reached number 10 during the apparently unusually hot British summer of 1976. I guess it was hot in Denmark as well. Can't remember.

This song is performed by Steve Harley & Cockney Rebel and appears on the album Timeless Flight (1976). That's about all the information, I can find on this song.

Yup, another first for me!

HIDEAWAY ... Interesting choice of makeup and outfits! So do you recall how well this performed on the Danish charts?  Really doesn't have the feel or sound of a Hit song, at least one that would have worked here in the states.  His vocals aren't very good, but it was the keyboard players neck-bob during his solo that had me laughing, maybe it was the camera angle...

MR. SOFT ... I'm chewing gum while I type this, and I don't care if anyone thinks that rude.  Catchier than the first song posted here, but his vocals, again, don't really work well.  Can't figure what this band's identity is.  They seem strangely all over the place.

MAKE ME SMILE ... 1.5 million copies, sold, 120 cover version and yet this is a first for me. Nothing about it is familiar.  Maybe you can help me understand how this got to be so popular, because the vocals are not good to me.  I will give you this about the music though, it is very catchy!

HERES COMES THE SUN ... It's not alright!

MAD MAD MOONLIGHT ... It's got nice moments musically but here again he's not vocally strong enough to make this work.  The rhythm guitars have a Southern feel to them yet the song doesn't approach anything remotely close to Southern rock.

My best guess is that this one of those bands that appeals regionally, kinda like Springsteen or that band Sambora used to belong to.  But alas, this is not for me, but I'm predicting that you predicted that as well...

I don't remember that single at all

. That was Wiki-information. Besides, I was 9 at the time. My favorite album at that time was the soundtrack to "The Jungle book".

I'm very surprised, that you haven't heard "Make Me Smile" before

. Maybe the vocals weren't that big an issue around here, as they are/were in the states. The most important thing is the melodi, which is very catchy, I think.

That was not exactly my introduction to HCTS, but when I heard this (or the live-version) in 1978, I realized how great a song "Here comes The Sun" is.

Yeah, I predicted that, allright.

I don't think the vocals are that bad.  They are very British sounding.

Hideaway - Not bad.  I like the acoustic guitar and the fiddle.  You have to love a band that has a fiddle player.  Piano player looks like Olive Oyl, but he plays a pretty mean keyboard.

Mr. Soft - This one doesn't do much for me.  The only thing I can really say is that it sounds like it could be a Kinks song. As far as the style of the song goes anyway.

Make Me Smile - This one is definitely better than the previous song.  What I'm finding that I like best about this band is the acoustic work.  It's definitely a big part of this song.  It goes to show that an acoustic guitar can be used to great advantage.  That Oh La La La toward the end reminds me of the song that the band wrote in School of Rock.  This is the best song so far for sure.

Here Comes The Sun - This is an interesting arrangement.  The drummer is lighting it up back there.  The bass is also very out front, and I like that.  Obviously, the vocals don't match that of The Beatles, but who could.  Fairly cool cover.

Mad, Mad Moonlight - I really like the drummer for this band.  His snare work on this song in particular is terrific.  I love that rolling beat, kind of like what you hear in Hollywood Nights.  This song leans toward prog a bit.  I also dig the fact that Steve Harley mostly plays acoustic guitar.  The song is decent, though it wears out it's welcome just a bit.

So now I've heard Cockney Rebel and Steve Harley.  And I appreciate it.  I can't say that I'm gonna seek out something from them, but if I ever run across something inexpensive I know enough now to make an informed purchase.  Thanks for than Niels.

Wow, some of these I've never heard, and the others I haven't heard in ages! I remember "Make Me Smile", and I remember the first time I heard this cover of "Here Comes The Sun" and thought it was The Kinks....lol. The others are a first for me, and I have nothing from them in my collection, but I could definitely see myself picking some of their stuff up! Sounds like they're mashing a punk sensibility vocal-wise, together with an almost progressive musical slant. I like it!
Thanks for sharing this, Niels!

Yeah, I can also hear that Kinks-inspiration, that you and RJ mention.

The only album, that I would recomend, and that i've been looking for many years (not THAT hard, though) is that double live-album from 1977 "Face To Face".

It was a bit more electric sounding than some of these accustic tracks (even though they are fine too), especially "Make Me smile" was imo sounding better live, with electric guitar-solo.