VIDEO'S OF THE WEEK: STEVEN WILSON 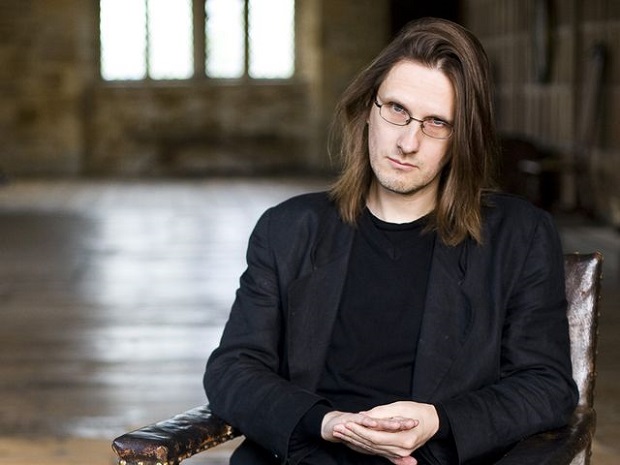 Off course, I have to have a Steven Wilson-VOTW also. It took me a while, to figure out if Steven Wilson's music was meant for me or not. The first time, I came across it, was when I posted a video in an earlier VOTW, back in 2009-10, by Porcupine Tree. I liked the video and the song, and one or two persons here at CRB knew the band, and said they were good. Out I went, and bought "The Incident". Did I like it? Not really, no. Then Wilson released "Grace For Drowning" in 2011, and I bought that one as well. Did I like that one? Not really, no. Then he released an album together with Mikael Åkerfeldt (Storm Corrosion) in 2012, and I bough it, and again I didn't like it much. In fact, I "told myself" that, if the next Wilson-album wasn't any good, I wouldn't spent any more money or time on him. Then he released "The Raven That Refused to Sing (And Other Stories)", and it was off course a masterpiece, and then "Hand.Cannot.Erase", both albums are two out of the 3 best albums released the last 10 years if you ask me. Since then, I've bought 4 other Percupine Tree-albums, which all are great. These video's are imo AWESOME, and improve on already great songs. But I think, they are made more as films to be played on big screens behind the band at concerts (I know, I've been to a concert, as you know) and that works out extremely well. If you haven't guessed it yet, I'm a BIG fan, especially of those two solo-albums (and videos)!! Wiki:Steven John Wilson (born 3 November 1967) is an English musician and record producer, most associated with the progressive rock genre. Currently a successful solo artist, he became known as the founder, lead guitarist, singer and songwriter of the band Porcupine Tree, as well as being a member of several other bands. He has also worked with artists such as Opeth, King Crimson, Pendulum, Jethro Tull, XTC, Yes, Marillion, Orphaned Land and Anathema.Wilson is a self-taught producer, audio engineer, guitar and keyboard player, playing other instruments as needed, including bass guitar, autoharp, hammered dulcimer and flute. He currently lives in Hemel Hempstead, the town he grew up in, but has also spent time living in London and Tel Aviv, Israel, although he does not hold a residence in Tel Aviv anymore.His music has received wide acclaim. He has been four times nominated for the Grammy Awards, twice with Porcupine Tree, with his collaborative band Storm Corrosion and as a soloist on one occasion. In 2015, he received three awards at the London Progressive Music Awards for his services to the world of progressive rock music and crowned "the king of prog rock".

In Absentia is the seventh studio album by British progressive rock band Porcupine Tree, first released on 24 September 2002. The album marked several changes for the band, with it being the first with new drummer Gavin Harrison and the first to move into a more heavy metal and progressive metal direction, contrary to past albums' psychedelic and pop rock sounds. Additionally, it was their first release on a major record label, Lava Records. It was very well received critically and commercially, with it often being considered the band's crowning achievement, and selling over triple what any of the band's prior albums had in the past.

Fear of a Blank Planet is the ninth studio album by British progressive rock band Porcupine Tree and their best selling before 2009's The Incident. Released by Roadrunner on 16 April 2007 in the UK and rest of the Europe, 24 April 2007 in the United States through Atlantic, 25 April 2007 in Japan on WHD and 1 May 2007 in Canada by WEA. Steven Wilson has mentioned that the album's title is a direct reference to the 1990 Public Enemy album, Fear of a Black Planet; while the former was about race issues, the latter is about coming to terms with 21st century technology.The album was written in Tel Aviv and London between January and July 2006. The promotion of the record included a premiere performance of the songs during the shows in support of the Arriving Somewhere... DVD tour between September and November 2006, and a series of listening parties at New York's Legacy Studios, and London's Abbey Road Studios during January 2007. Fear of a Blank Planet was followed later the same year by release of the Nil Recurring extended play. An additional track titled "Always Recurring" was demoed yet did not receive a formal release on any of the four records (the Fear of a Blank Planet LP, the Fear of a Blank Planet single, the Way Out of Here single, and the Nil Recurring EP) released by Porcupine Tree during this era. With the release of Insurgentes, which is considered Steven Wilson's debut solo album, Wilson would further develop some of the ideas on which Fear of a Blank Planet is conceived.

"Harmony Korine" (named after independent American film director of the same name), is the first track of Insurgentes, the first full-length solo studio album by British musician, songwriter and music producer Steven Wilson. The song was NPR's "Song of the day" on March 4, 2009. A single of the same name was released by Kscope record label on black, white and red 7-inch vinyl format, limited to 1,000 copies each one. Its B-Side, a song titled "The 78", was previously available as a hidden track in the second disc of the deluxe edition of Insurgentes.

After the release of his first solo album, Insurgentes, Steven Wilson spent time on a number of his other projects. These include Porcupine Tree's album The Incident in 2009, Blackfield's third album Welcome to My DNA, on 28 March 2011, and an on-going project with Mikael Åkerfeldt (the leader of the band Opeth) named Storm Corrosion. However, amongst these projects, in 2010, he announced that he had started working on his second solo album as well.In early June 2011, Wilson launched a minisite for the new album revealing the album's name and album art photographed by his longtime collaborator Lasse Hoile. Additionally, a free download of the track "Remainder the Black Dog" was also added. Sound and Vision magazine's website premiered the video of "Track One" on 10 August 2011. Not long after, Yahoo! Music debuted the music video for "Index". On 16 August, WNYC's website premiered a free download for the radio edit of "Like Dust I Have Cleared From My Eye". A video clip for "Remainder the Black Dog" was finally released on 31 August, through Guitar World magazine's website.

The Raven That Refused to Sing (And Other Stories) is the third solo album by British musician Steven Wilson, released by Kscope Music Records on 25 February 2013. Each track on the album is based on a story of the supernatural. Alan Parsons, who had previously been involved in the creation of Pink Floyd's The Dark Side of the Moon, was responsible for engineering the album.A deluxe, 4-disc edition of the album was released as well, which included a 128-page book of lyrics and ghost stories, with illustrations by Hajo Mueller (I've got that one, and it's AWESOME!!). In addition to this, the album is also available in stand alone double-vinyl, CD and Blu-ray editions. The album was generally well received critically, but has only sold nearly 100,000 copies.

"Amongst the hundreds of songs I have written over the years, 'Routine' has a very special place. It's a deeply sad story of loss and denial, but at its conclusion the clouds lift and there is acceptance at least. Having worked with her on 3 previous videos, I knew as soon as I wrote it that it was perfect for Jess to do something amazing with. Even then nothing prepared me for the organic beauty and power of the film she made, a painstaking labour of love that took her months to produce. When we play the song live I look out into the audience and see people swept away with emotion at the combination of music and animation. To find poetry and beauty in sadness is a wonderful thing I think" - Steven Wilson

BLACKEST EYES ...  Even with the early experimental albums this band has always been interesting to me.  But beginning with Signify they've been outright phenomenal.  There's not really a let up with PT albums.  This song and album are also very good.  killer album, killer song!  Video is interesting as well.  Performance videos are always my faves.  This band has several I need to start looking into.

FEAR OF A BLANK PLANET ... Ditto the above comments except this isn't a live performance.  One thing that has gone missing is the sound quality of PT/SW releases.  As un as these videos are, so far, the real value of his music is in the production and sound.  So good!!

HARMONY KORINE ...  Since discovering PT/SW on this site I've went back and picked these up as well.  But, unfortunately, they really remind me more of PTs early work because they feel so experimental.  But this is a fine track that feels at home on any of the two PT records you've culled tracks from so far, also, he was obviously beginning to conceive the Raven stuff at this time.

REMAINDER THE BLACK DOG ... Another interesting video and song. But its the instrumentation that's most interesting on this one.  I have an idea, but I don't think I fully grasp the video concept.  I do know that Wilson writes music from a dark place as he has stated several times, these concept videos seem to confirm that pretty clearly.

DRIVE HOME ...  I've watched video quite a bit and its cool.  I love the tune, and album is clearly one of the new millenniums best, I would agree with you on that.

ROUTINE ...  Ditto on this one as well, seen it a few times already.  The video is actually quite riveting and well done.  I look forward to what he has next...

On a side note:  I'd be interested in checking out Blackfields work, any insight?

Blackest Eyes - This one is pretty good.  It moves along well with a bit of heaviness.  Nice track.

Fear of A Blank Planet - I am not at all a fan of the distorted production.  It's intentional, but it's oh so annoying to my ears.  Just give me a clean sound.  This is another upbeat song and it's decent, but not as good as the previous track.

Routine - ...is boring.  So is this album.  I respectfully disagree with all of you here that hold this in such high regards.

I'm going out of order because: a). These videos are too long and it takes forever to get through this stuff and b). My computer is screwy and just won't play some of the videos unless I restart it.  It's quite aggravating.

Drive Home - This is definitely better than anything from Hand.  I really like the first song off of this album and the rest, although straying toward the boring side, doesn't quite get there.  Therefore it is easily a better album than Hand.

So, I guess I'm done.  I do think his stuff with Porcupine Tree is better than his solo stuff.  However, I would much rather listen to Opeth, even the earlier stuff with the cookie monster stuff, than solo Wilson.  If I get a chance, I may watch the other two videos here, but don't be offended if I don't.  I just don't have any interest in this guy.  I did try.  I bought The Raven and Hand, and I own two previous PT albums.  So you can't say I didn't try.  But I'll just let you guys be fans and I'll listen to something else.