VIDEO'S OF THE WEEK: T.REX 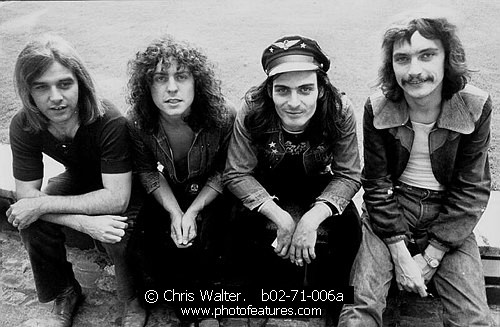 Again a band, I'm not exactly a fan of. I don't even own an album, not even a "Best of". But I do own a DVD: The Movie "Born To Boogie" which was released as a double special edition a few years back. It's not bad, but not that great, since some of my favorite T-Rex-songs weren't made at the time, the movie was made. T-Rex/Marc Bolan was very, very popular in England around 1972, and Bolan certainly has star-quality. I do like their music, but it is a bit too simple for me to be a fan, but let's dig into some of their songs/video's:

"20th Century Boy" is a song by T. Rex, written by Marc Bolan. It was released as a single in 1973 and reached No. 3 in the UK Singles Chart. The song was not featured on an original studio album but was included as a bonus track on a reissue of 1973 album Tanx.It later returned to the UK Top 20 in 1991, peaking at No. 13, fourteen years after Bolan's death, when it was used in a Chris Hartwill-directed commercial for Levi's starring Brad Pitt. A slightly different segment of the song, with the addition of a harp, was used in a Jameson Irish Whiskey television advertisement. It plays a key role on the science fiction-mystery manga 20th Century Boys.

I LOVE TO BOOGIE

"I Love to Boogie" was released as a single on 5 June 1976 by record label EMI. It later appeared on T. Rex's final studio album, 1977's Dandy in the Underworld. The song was in the UK charts for a total of nine weeks, peaking at No. 13.The song was released to controversy due to its resemblance to Webb Pierce's "Teenage Boogie", prompting rockabillies to attempt to burn copies of the single at an event held in a pub on the Old Kent Road, South East London. Disc jockey Geoff Barker complained that "The records are so alike it can't be a coincidence." When Pierce's publishers contacted Bolan's London office, Bolan's manager Tony Howard employed a musicologist to analyse both songs. The musicologist noted that "Teenage Boogie" was itself based on a riff that had been around long before the song was written."I Love to Boogie" is amongst T. Rex's best known and most popular hits, and probably also my favorite. I remember hearing it in the 70's.

"Jeepster" was released as a single on 1 November 1971 by record label Fly. The single peaked at No. 2 in the UK Singles Chart, and was controversial in that Fly Records released the song without singer Marc Bolan's prior permission, Bolan having just left Fly for EMI, which had given him control of his own label T. Rex Wax Co. Records. The music and rhythm are similar to that of the Howlin' Wolf song "You'll Be Mine", written by Willie Dixon. In interviews, Marc Bolan has acknowledged that he "lifted it from a Howlin' Wolf song". "Jeepster" has also similarities with Roy Orbison's song "You're My Baby" (written by Johnny Cash).

"Hot Love" is a song by English glam rock act T. Rex, released as a standalone single on 12 February 1971 by record label Fly. It was the group's first number one placing on the UK Singles Chart, where it remained at the top for six weeks beginning on 20th March 1971.The two performances of the song in March 1971 on Top of the Pops, which saw Bolan dressed for the first time in shiny satin stagewear and glittery make-up (the latter at the suggestion of his stylist Chelita Secunda) were a crucial trigger for the glam rock movement.

CHILDREN OF THE REVOLUTION

"Children of the Revolution" is a song by T. Rex, written by Marc Bolan. It was a No. 2 hit single in September 1972. The song broke their sequence of four official single releases all reaching No. 1 ("Hot Love", "Get It On", "Telegram Sam", "Metal Guru"). It did not receive a regular album release. The song is about teenage rebellion, and upon its release, some critics[who?] blasted the song, as it marked a change in the band's overall tempo. It was included in the film Born to Boogie, in the famous Apple Studios jam with Elton John on piano and Ringo Starr joining the band on drums. During the jam, Marc Bolan puts his head through a grand piano while John is playing.

I know literally nothing about T-Rex.  I've certainly heard of them, I'm pretty sure they were quite influential.

20th Century Boy - Not a bad song, but not anything that blows me away either.  It does have a Stones feel overall, but I also get just a slight hint of Zeppelin.  The vocals are okay.  I've heard of Bolan, is he the singer/guitar player??  I've heard the song, it's covered by Def Leppard on their Yeah! album.

Boogie - Funny, burning copies had quite a different meaning in the early 70's than it does now.  Okay, so I've figured it out, Bolan is the singer/guitar player.  Looks like he might have been a pretty good front man.  But I don't care for this song.  I have to be in the right mood and it has to be a better song for me to like this boogie/rockabilly type song.

Jeepster - Musically, this has a country feel to it.  But once again, it's not a very good song.  It may have been lifted from Dixon, but maybe he should have done more with it.  Yep, the guitar is very country here.

Hot Love - If the tambourine was still in, I think I could be in a band.  I'm guessing the boogie woogie/rockabilly style was quite common in T-Rex's music.  It really just doesn't appeal to me for the most part.  Maybe it's just the video quality, but I don't see any makeup.

Revolution - This is a bit better, not great.  Probably the best or second best song here (the first one being the other). It has a vibe similar to Get It On.  This band didn't do a lot of guitar soloing, did it?

Overall, nothing I feel the need to dig into.  Like I said, the band certainly influenced other bands and even musical movements, but they don't appeal to me.  An educational post none the less...

Bolan WAS T.Rex. Singer, songwriter, guitarist, frontman especially. But i'm no expert. The first time, I recall noticing the bandname T.Rex was in '75-'76, and I think they already was history at that time. Bolan died in a car-crash in 1977.

Familiar with this guys influence more than his music...

I Love To Boogie ...  Very simple tune.  It could be mistaken for a lot of songs, so I guess this is some sort of spin on the classic 50's boogie groove?

Jeepster ... Each tune has that familiar ring to it, and I think its becoming clear what this guy did.  He clearly borrowed a successful formula from other artists songs and rocked them up a bit, but he also wrapped them in this glitzy package and stage show, and it worked!  While nothing here is blowing me away, there is some odd appreciation of what he's done to influence the young ones at that time, which we now know consists of what would become Def Leppard, so that's cool...  By the way, I have no idea what a Jeepster is.

Revolution ...  This and the first tune probably are the best here.  Very interesting to watch and hear, but nothing that really moved me.

State side we know Get It On (Bang a Gong) as its hits the charts a few times from a few different artists, but that's it that I can recall.  Everything else I know came from reading about his influence.  So you have just quadrupled my T Rex knowledge.  Fun to watch and hear but that's about it...