VIDEO'S OF THE WEEK - THE SMALL FACES/THE FACES I WAS my intention to make a Kenny Jones-special, but "standing" alone, Jones isn't THAT interesting. Sure he was also a member of The Mighty Who, but Daltrey thought is was a major mistake, and I agree, because no one at all could replace the one and only Keith Moon.

Therefore I've made a special instead of Small Faces/Faces. Just as regarding The Yardbirds, I don't own much music by "this" band (meaning I don't own anything by Small Faces) "just" a box-set by The Faces (4 CD's), but it's a pretty good box-set.

Let's start:"Small Faces were an English rock band from East London. The group was founded in 1965 by members Steve Marriott, Ronnie Lane, Kenney Jones, and Jimmy Winston, although by 1966 Winston was replaced by Ian McLagan as the band's keyboardist."The band is remembered as one of the most acclaimed and influential mod groups of the 1960s".

"Itchycoo Park" is a psychedelic pop song written by Steve Marriott and Ronnie Lane. The song reached number three in the UK Singles Chart in 1967. The song was one of the first pop singles to use flanging, an effect that can be heard in the bridge section after each chorus.

Tin Soldier was originally written by Steve Marriott for singer P.P. Arnold, but Marriott liked it so much he kept it himself. It was a song that he wrote to his first wife, Jenny Rylance. P.P. Arnold can be heard singing backing vocals on the song. The song signalled a return to the band's R&B roots after their previous forays into psychedelic rock and other musical experiments. When Tin Soldier was released the BBC informed the band that the last line of the song had to be removed from all TV and radio broadcasts, mistakenly believing that Marriott sang "sleep with you", when in fact the lyric is "sit with you". Marriott explained that the song was about getting into someone's mind—not their body. Tin Soldier reached number nine in the UK Singles Chart and remains one of Small Faces' best known songs.

Without a doubt, my favorite Small Faces-song!! "Lazy Sunday" has a traditional cockney East End of London music-hall sound. The song was inspired by Marriott's feuds with his neighbours and is also noticeable for its distinct vocal changes. Marriott sings large parts of the song in a greatly exaggerated cockney accent; he did this partly due to an argument he had with The Hollies, who said that Marriott had never sung in his own accent. In the final bridge and the last two choruses, he reverts to his usual transatlantic (singing) accent.The backing melody quotes "(I Can't Get No) Satisfaction" by The Rolling Stones, played on kazoo. At the end of the song the tune dissolves into birdsong.

The Faces was formed in 1969 by members of the Small Faces after lead singer/guitarist Steve Marriott left that group to form Humble Pie. The remaining Small Faces—Ian McLagan (keyboards), Ronnie Lane (bass), and Kenney Jones (drums and percussion)—were joined by Ronnie Wood (guitar) and Rod Stewart (lead vocals), both from the Jeff Beck Group, and the new line-up was renamed the Faces.

THE FACES - STAY WITH ME

"Stay with Me", written by Rod Stewart and Ronnie Wood, was first recorded by their band Faces for the 1971 album A Nod Is As Good As a Wink... to a Blind Horse. The song has also appeared on various Faces compilations and on albums by both songwriters. The lyrics describe a woman named Rita with "red lips, hair and fingernails" he "found... down on the floor"; the singer proposes a one-night stand on the condition that she must be gone when he wakes up.The distinctive guitar sound owes to Ronnie Wood's hybrid fingered-chord-riff / slide guitar solos played on an open-E tuned Zemaitis guitar. The song starts with a breakneck tempo that settles into a steady half-tempo groove, and then jumps back into a flashy double-time finale adorned with instrumental solo fills.

"(I Know) I'm Losing You" is a 1966 hit single originally recorded by The Temptations. The song was later covered by Faces and released on lead singer Rod Stewart's 1971 solo album Every Picture Tells a Story (due to contractual restrictions, the name "Faces" could not be mentioned).The video shows The Faces at the BBC from the Sounds on Saturday programme shown in 1971. Should be their best performance on TV. 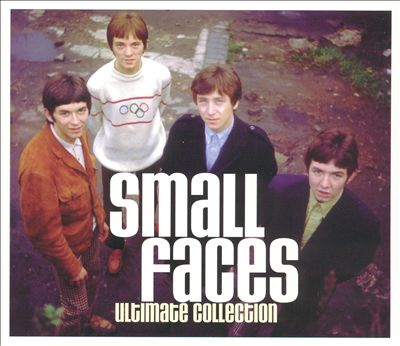 I ordered it pretty cheap (a double CD for 2/3 the price of a single CD) , and I need to know more about this band. I've always "concentrated" on The Faces, but looking and listening to the first two videos, I think, that it's obvious, that Marriott is a S-T-A-R, and SF are much more than "Lazy Sunday". I KNEW the songs before, but I'm older and wiser now, also regarding music.

I just added it to my wish list.  It is twelve dollars here, but that's not bad for 50 songs.

I know nothing about The Small Faces or The Faces.  So good pick from that standpoint.

Itchycoo Park - I guess that's Marriott on lead vocals.  I like the part where they say "why did you go there" and he says "to get high".  I just like the way that part is delivered.  Never heard this song, but it's definitely a sixties song and it's not too bad.  The video is straight forward performance, which is exactly what you would expect from this time period.

Tin Soldier - Wow, that is a terrific song.  I have to say that after I featured Smokin' a few weeks ago and after I listened to it a couple of times, I really didn't get what folks loved so much about Marriott.  But he is on fire for this song and video.  Maybe I need to pick up some Small Faces.  He sort of makes me think of Bruce Springsteen and how he overplays his guitar sometimes, but Marriott looks much cooler doing it.  He can move.

Lazy Sunday - This song actually doesn't do anything for me.  But the video is neat.  Mainly because it's an actual concept video, something you see very little of from back then.  It's basically a Monkees video.  That's exactly what it reminds me of.

Losing You - I've heard this one too.  This may be one of the all time greatest covers.  This band is on fire, none more so that Kenny Jones.  And I'm not even talking about the solo.  Just his playing in the song is awesome.  Of course, Wood and Stewart sound great again.  Off subject, but the Temptations have written some great, great songs.  I have got to pick up a greatest hits disc by them.  Cool performance all the way around.

So there you have it.  Now I know why they were once The Small Faces and then The Faces.  So Niels, who do you prefer as the frontman, Marriott or Stewart?

That's a tough one!! I'll have to get back to you, because I need to listen to the Small Faces-CD, I'll get tomorrow. Even though, I've know Marriott's name for YEARS, I did'nt really know him as an artist/singer.

I had actually this VOTW-special made before you posted the Humble Pie-album, and I thought about posting it the week after, but decided to wait a bit. But listening to that album, and the video's here, made me realize, that he is much better, than I thought. I really only knew his cockney accent-singing voice from "Lazy Sunday", and thought, that it was his usual way of singing.

But until I know more of Marriott, I have to say Stewart. His voice can be very tiresome to listen to, but at the time in the 70's, when he was in The Faces (and I remember collecting bubblegum-pictures of Pop-stars around 1974-5, and among them: The Faces (...and T-rex, wow, in that split second, I got a new idea for VOTW)), he was cool. That coolness ended around 1980, though.

I grew up during the hair metal explosion, so I was first introduced to Itchycoo Park by Blue Murder

ITCHYCOO PARK is 100% new to me, but you noted that it was written by Marriot and Ronnie Lane, as soon as I read that it had a familiar feel to it since I own the Pete Townshend & Ronnie Lane Rough Mix album.  Add to that our new found love for Humble Pie and were off to a very cool start!

TIN SOLDIER was not as good as the first video but it was funner to watch!

LAZY SUNDAY.  I can hear more of a Faces feel to it, it sounds like Stewart would be right at home singing this one, but Marriot does a fine job!  And these old "concept" videos are great!

STAY WITH ME, now this is the band I really know and was a fan of.  I love this tune!

I KNOW IM LOSING YOU.  Cool!  Stewart always recorded a cover or two on everyone of his studio albums, probably none better than this!

Great post and a great series!  The Revamped Videos of the Week is a smash hit!!!