VIDEO'S OF THE WEEK - THE SWEET 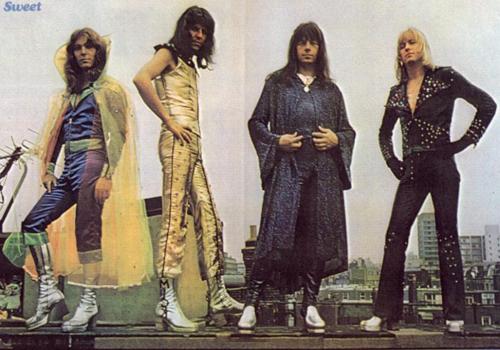 Sweet was probably the first band at all, that I became a fan of, even though I didn't know it myself at the time. My big sister bought their 1974-album "Fanny Adams", but expected it to be full of bublegum-hits, but it was much heavier than that. I liked it, and eventually she gave me the album (years later). I knew of Sweet, because a friend of mine had a tape called "Funny How Sweet CoCo Can Be", which was the very first Sweet-album released in 1971, and it was probably around that time, that I first heard it, and the sound of it still sounds like the sound of my very youth. Even though, it was nice listening to, it wasn't until a couple of years later, when "Fox On The Run" entered the top spot on the danish singlelist, that I became a "fan".

"Wig-Wam Bam" is a song by the Sweet, written by songwriters Nicky Chinn and Mike Chapman, released as a single in September 1972. It was the first song where the band was allowed to actually play on their records, as the record company didn't let them play on their own records and session musicians played on their previous five RCA singles. This is the first single on which Steve Priest, Andy Scott, and Mick Tucker played their instruments, as previous singles featured producer Phil Wainman on drums, and session musicians John Roberts and Pip Williams on bass and guitars respectively.

FOX ON THE RUN

"Fox on the Run" is a song by the British band Sweet, first recorded in 1974. It was Sweet's first single that was written by the band, rather than producers Nicky Chinn & Mike Chapman. It was their 14th single and in 1975 reached number 2 on the British single list, 5 in the US, 1 in Australia, 1 in Germany, 1 in Denmark, 2 in Canada, 2 in the Netherlands, 2 in Norway, 3 in Austria, 3 in New Zealand and 10 in Finland and Sweden. The lyrics of the song are about groupies; "fox" was a popular slang term at the time for an attractive woman.Two versions were recorded by Sweet. The original version was produced by Mike Chapman in association with Nicky Chinn on the European version of the 1974 album Desolation Boulevard. Sweet also recorded and produced a more pop-oriented version as a 7" single in 1975, which is the more familiar version of the song. The 1975 single version was included on the North American version of Desolation Boulevard.

"Action" is a self-written and produced 1975 song by the rock band Sweet. The song went through several iterations; a 7" single version was recorded at Ian Gillan's Kingsway Studios in London and slightly different versions appear on the albums Strung Up and Give Us a Wink. It reached the Top 10 in 1975 in numerous European countries and Canada but stalled at #15 in the UK and #20 in the US. The lyrics refer to Sweet's negative treatment as pop-stars, particularly by the music press, and to the demands of the music industry. The track features a masked 'backwards vocal' with the words 'You kiss my arse'.Raven made a cover-version on their debu-albu, that I bought in 1981. But off course I knew this version from 1975.

Sweet Fanny Adams is the second album by Sweet, their first of two released in 1974, and also their first album simply as Sweet. The album was a turning point and change in the band's sound. It featured more of a hard rock sound than their previous pop records.The album title is English (originally Royal Navy) slang originating from the murder of eight-year-old Fanny Adams in 1867 and means "nothing at all" as well as a similar euphemism "F.A." = "f*** all".Sweet Fanny Adams reached #27 on the UK album charts in the year of its release by RCA Records in 1974. It was not released in the US but five of its tracks appeared on the US version of the album Desolation Boulevard released later the same year.

Looking back, I'm sure the heavy riffs on this album in a way made me a fan of riff-based Heavy Rock later on. I know, Mötley Crüe was very inspired by Sweet, but a lot of the 80's Glam-bands must have looked at Sweet, and listened a lot to "Fanny Adams", even though I prefer FA to any 80's Glam Rock band.

I first heard their bubblegum era when I picked up a Greatest Hits package that came out right about the same time CD's were taking off.  Gotta admit, I didnt care for this or Little Willy...  But it is very interesting to watch and remember.  I guess much like the boy bands of the late 90's this music was the shiz (as they say)...  All said, cool video but I can certainly see why the were not critical darlings at the time.

Cool tune from a cool album!  Ace Frehley does a real cool cover of this, its like it was written for him!  Hilarious that that hair was once cool!

This was also new to me with the Greatest Hits package.  To me Sweet is 3 albums - Desolation Boulevard, Level Headed and VI.  The latter of which was an impulse purchase but it actually turned out to be pretty good.  I don't own it on CD or anything but the vinyl still sits in my bonus room.

This was on the US Desolation Boulevard album as well.  I still like the production of this album, a deluxe remastering treatment would be cool!

In the states we were left to wonder what FA was, needless to say the minds of young boys went wild...  Way cool video and tune!

Another band I only know by name and maybe a song or two.

Wig-Wam Bam - Never heard this.  They look kind of like The Village People.  The lead singer has a good rock and roll voice.  I had no idea they were treated like The Monkees.  I can't say I particularly care for this song, but like I said, the singer is pretty good.  It's a fun video to watch too.  That show seems to be similar to American Bandstand.

Fox - I've certainly heard this one.  It's a terrific song. I guess that I've heard the single version, though I'm not really sure.  I like Ace Frehley's cover of the song too, but I'm sure you probably already guessed that.  This song was a perfect choice for Ace to cover.  Again, I really like the singer's voice.  The video is a straight forward performance video and it's okay, not much action.

I'll have to listen and watch in sections, so be patient with me.

Action -  Don't think I've heard this, although the chorus sounds familiar.  Speaking of the chorus, nice hook.  I don't like this quite as much as Fox, but it's pretty good.  It has some Queen"ish" stuff going on with some of the vocals and guitar playing near the end of the song.  The video is a trip.  It contains two shots of a cash register.  That's it, that's the concept.  Everything else is performance.

Free - Wow, that really is heavier.  I guess they figured enough with the pop stuff.  It really sounds like NWOBHM   to me.  I was never a fan of that genre, but this guy sings well, and that is a big plus for me.  Same old same old for the video, except it looks like a hack job.  Vocals don't line up with the lips a lot of the time.  Cool song.

Sweet FA - Not a great song if you ask me, but the riff is nice again.  Again, you get some of that NWOBHM feel, but also some of the glam pop feel.  It is very to see that this band had a major influence on the glam/hair bands of the 80's and even on a band like Kiss.

Nice pick this week Niels.  I will eventually pick up something by this band.  Not sure whether it will be a studio album or a greatest hits album.  We shall see.

Heard Action on the radio on the ride home tonight.  I like it, more than I thought I did.  It really does have a great hook and it plays really well in the truck, turned up loud, of course!  Might have to pick up an album.

I can only recomend "Sweet Fanny Adams". I know there's an american version of the album (Desolation Boulevard), but it's kind of like the american versions of the first Beatles-albums: It's not the same, and not the way the band/producer intended the album to be (as far as I know). SFA is a REAL album, and as I've said before, the first rock-album I ever really noticed and liked/loved (in 1974/75). Even the album-cover is way cooler. 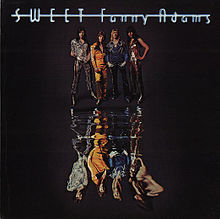 Heard A.C.D.C on the same radio station on the way home last night.  Then they played Joan Jett's cover of the same song.  I have to admit, I liked the cover version better.